S. Korean gov’t and Hanocal embark on investor-state dispute procedures
9-May-2016 Pulse
The Dutch company Hanocal sought international arbitration to demand more than 240 billion won ($205 million) in compensation for what it claimed as extra taxes it had paid to the South Korean government.
CETA runs into trouble with Dutch, Walloon parliaments
2-May-2016 EurActiv
The Dutch parliament has passed a motion rejecting provisional application of the EU-Canada trade deal, known as the Comprehensive Economic and Trade Agreement (CETA).

‘Hanocal may sue Korean government over sale of Hyundai Oilbank’
4-May-2015 Korea Herald
The Dutch company will file an ISDS application against the Korean government, should the authorities refuse to pay 183.5 billion won ($169.9 million) in tax refund.

Socialising losses, privatising gains: How Dutch investment treaties harm the public interest
29-Jan-2015 TNI
This paper shows how (the threat of) lawsuits taken to the International Centre for Settlement of Investment Disputes and other fora, using Dutch BITs, have effectively blocked policymaking in the public interest for development in host countries.

Netherlands – Indonesia BIT rolls back implementation of new Indonesian mining law: The case of Newmont Mining vs Indonesia
13-Nov-2014 TNI
The case of Newmont Mining vs Indonesia is a powerful example of how investment agreements, particularly Bilateral Investment Treaties (BITs), are used by companies to get exemptions from government regulations and legislation, undermining democracy and development.
Dutch unfazed by SA’s cancelled trade treaty
17-Jul-2014 BD
South Africa’s unilateral cancellation of its bilateral investment treaty with the Netherlands, a major trade and investment partner, does not appear to have dampened the Dutch appetite for investment in the country.

Vodafone initiates investment arbitration against India
8-May-2014 Live Mint
Vodafone Group Plc has abandoned the conciliation process and started international investment arbitration against the Indian government over its long-running tax dispute.
Indonesia terminates its BIT with the Netherlands from 1 July 2015 and may terminate all of its BITs
28-Mar-2014 Lexology
While certain countries have terminated individual BITs, termination of all BITs would be unprecedented.
After South Africa, Indonesia takes a brave decision to terminate its BIT with the Netherlands
26-Mar-2014 IGJ
Last week, the Indonesian government announced that it will terminate its Bilateral Investment Treaty (BIT) with the Netherlands, joining the growing number of countries concerned about the excessive corporate rights enshrined in investment agreements. 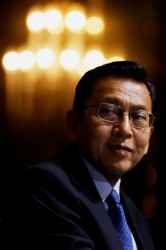 Indonesia indicates intention to terminate all of its bilateral investment treaties?
24-Mar-2014 Lexology
According to the Netherlands Embassy in Jakarta, Indonesia has informed the Netherlands that it has decided to terminate the Bilateral Investment Treaty between the two nations from 1 July 2015. The Embassy also states that “the Indonesian Government has mentioned it intends to terminate all of its 67 bilateral investment treaties“.
World Bank’s ICSID rejects Venezuela "appeal" over ConocoPhillips expropriation
13-Mar-2014 Latin American Herald Tribune
In a 2-1 decision, the World Bank’s arbitration panel has rejected Venezuela’s request for "reconsideration" of its September 2013 finding that it had jurisdiction and that Venezuela was liable for the expropriation of ConocoPhillips’ investments in the Latin American nation.
Why South Africa should send the Dutch government a letter in the next two weeks
31-Oct-2013
1st of November 2013 is an important date if one wants to get rid of this outdated treaty which poses growing risk to policy making in the public interest

Voda seeks Netherlands treaty to snub govt, will others follow?
30-Mar-2012 First Post
Fearing the Indian government will use new tax laws to trap it back around Rs 12,000 crore in taxes, the world’s largest mobile operator, Vodafone, may invoke a bilateral investment treaty between India and the Netherlands to avoid doing so.
0 | 20 | 40 | 60 | 80
Subscribe to bilaterals.org weekly