S. Korea, EU have differences over automobiles in free trade talks
17-Jul-2007
South Korea and the European Union are struggling to narrow differences on tariffs and safety regulations on automobile trade as they try to forge an ambitious free trade agreement, a top South Korean negotiator said Tuesday. 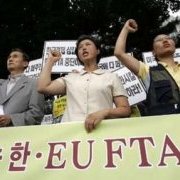 EU sets ambitious goals for South Korean free trade deal
17-Jul-2007 Monsters and critics
’We are setting the bar very high with a 100-per-cent trade liberalization offer,’ an EU trade official told Deutsche Presse-Agentur as European and South Korean officials opened a second round of negotiations in Brussels.
Korea removes rice from EU FTA talks
16-Jul-2007 Chosun Ilbo
South Korea has sent a draft proposal on free trade talks to the EU, promising to remove or phase out import tariffs on cars over seven years. Seoul has also decided to exclude rice from its list of markets subject to opening, but it may agree to open up its agricultural market, including beef.
Kaeseong goods expected to be problem at EU FTA talks
12-Jul-2007 Chosun Ilbo
Korea’s chief envoy to free trade talks with the European Union is cautioning against being overly optimistic about having products made at an industrial park in North Korea’s Kaeseong included in the bilateral trade deal.
EU FTA to focus on manufacturing sector: official
12-Jul-2007 Yonhap
The ongoing free trade pact talks with the European Union (EU) will be centered on the extent of liberalization of the manufacturing sector, a senior Korean government official said Thursday.
FTAs uncorking big changes in Korea’s wine market
28-Jun-2007 Chosun Ilbo
The Korean wine industry expects the Korea-EU free trade agreement will cause a third seismic shift in Korea’s imported wine market.
S. Korean minister calls on EU firms to consider investment in Kaesong complex
11-Jun-2007
South Korea’s commerce minister on Monday called on European companies to consider investing in an inter-Korean industrial complex in North Korea.
S Korean minister calls on EU firms to consider investment in Kaesong complex
11-Jun-2007 Yonhap
No foreign firm has expressed interest in the facility that South Korea wants to build up as a showcase for economic cooperation between the Koreas.
National interests need to be top priority in Korea-EU FTA
12-May-2007
Korea and the European Union have finished their first round of free trade talks. They have agreed to the basic principle of eliminating tariffs on 95 percent of all their products and on industrial products in ten years. We hope to see these negotiations be prudent and thoroughly about looking after Korea’s interest, which was not the case with FTA talks with the United States, which were forced through by a ticking clock set by the other side.
South Korea-EU free trade talks got off to fast start, both sides say
11-May-2007
South Korea and the European Union made good progress this week in their first round of negotiations to forge a major free trade pact, chief negotiators from both sides said on Friday, but they conceded sensitive issues were barely touched.
0 | ... | 90 | 100 | 110 | 120 | 130 | 140 | 150 | 160 | 170 | 180