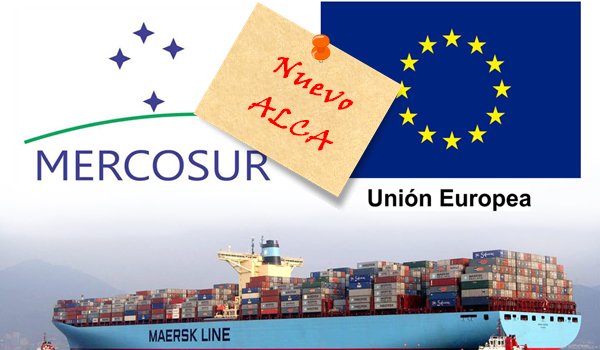 Our agriculture, our natural resources and our food are at imminent risk

The possible signing of the agreement that the Mercosur countries urgently seek to approve poses a great threat to rights won through heroic grassroot struggles, to our sovereignty, to our economies and to a regional integration respecting socioeconomic and environmental justice. Herewith we put forward 12 reasons why we oppose the deal and invite you to join us against the signing of the agreement that will impact our food production, our national and food sovereignty and the commons. Before negotiators meet in Asunción for their next round, we call upon people to mobilise and shout a resounding NO to the entire agreement.

1- Because the agreement has been negotiated in secret, without consulting civil society, parliaments and grassroot organisations representing the sectors that will be affected in our countries. The only documents that have been made public are leaks, including those released by Greenpeace Netherlands as Mercosur Leaks (http://bilaterals.org/?-eu-ftas-⟨=en). They are drafts, not final texts, and do not show the negotiating history of the agreement nor whatever concessions were made.

2- Because the agreement seeks to benefit large corporations from the North and the agro-exporting elites of Mercosur. It is disguised as an "association agreement" while the negotiating agenda of the two blocs includes the most harmful elements of the free trade agenda, which is increasingly less free and taking on non-trade issues. This will seriously affect governments’ ability and latitude to pursue public policies for the general interest.

3- Through this agreement, the elites of Mercosur want to increase exports from intensive livestock and soybean production. If the agreement is signed, it will exacerbate the problems that agribusiness has already been producing in the region: deforestation, eviction of peasants, pollution from agrochemicals, destruction of local economies, loss of food sovereignty and increased food vulnerability. Peasants and small family farmers produce most of the food in the region. The model pushed by the agreement promotes corporate control over land, which will generate more of the violence, criminalisation and persecution that peasant communities throughout the region are already suffering today.

4- Because it will privatise our seeds, making their free exchange and flow illegal and a criminal offense. This will happen because intellectual property rights are part of the negotiations of the agreement. Regarding seeds, the leaked text indicates that “each Party shall protect plant variety rights, in accordance with the International Convention for the Protection of New Varieties of Plants adopted in Paris on December 2, 1961, last revised in Geneva on March 19, 1991 (UPOV 1991)”. This means that Monsanto Laws will be imposed in all our countries.

5- The same intellectual property chapter requires the adoption of the Patent Cooperation Treaty (PCT Treaty) that promotes the facilitation of patenting on a global scale. This could mean imposing the patenting of life, which is currently not possible under national legislation in Mercosur countries. In addition, the negotiating text introduces new restrictions on the use of test data in the pharmaceutical industry, which could lead to restrictions on the production of generic medicines, curtailing the right of access to health and imposing heavy burdens on national public health budgets that would be based on an increase in the costs of available drugs.

6- Domestic companies will go out of business because the chapter on services allows foreign investments of companies that establish subsidiaries in the country of the other Party to be subject to the preferential treatment granted by the agreement. This will be a setback since the initial position of Mercosur was to keep investment out of the negotiations.

7- The agreement severely hampers our countries’ ability to define key programmes and policies, such as measures to fight climate change, promote food security and sovereignty, and advance the right of indigenous peoples to prior, informed consultation. It responds instead to a clear objective of deepening the primary export model and limiting the implementation of policies in favour of the diversification of the production matrix, sovereign science, innovation and research, industrial promotion and the promotion of alternative and sustainable ventures.

8- European companies could access public tenders made by government entities at the broadest territorial circumscription level. This is due to the fact that, in public procurement matters, the European Union requires adopting the plurilateral Agreement on Government Procurement of the WTO, which has not been signed, and therefore not implemented, by any Mercosur country.

9- While promoting SME integration in transnational value chains is set as an objective, the framing of the bi-regional relationship in strict free market schemes makes already-weak assertions in favour of development less credible. Giving up public procurement as a tool for promoting productive development in emerging industries or the social and solidarity economy is a very negative signal sent to SMEs and a clear contradiction with the promotion objectives of these productive units.

10- Sanitary and phytosanitary measures will continue to be used by the EU to keep agricultural products from Mercosur out of its market, rather than as a legitimate tool for protecting the health of its population, since this is what it has always done. The intense discussions around the sanitary and phytosanitary chapter, reflected in the leaked version from June 2017, and which have become even more intense according to sources in Brussels, suggest that the EU will continue to push in this direction.

11- The chapter on State enterprises that the EU put on the negotiating table will force States to commit that their companies operate under strict trade considerations, thus limiting their ability to promote specific production sectors, demeaning the general interest function of the public sector that the State must guarantee through its enterprises. This is found in various EU free trade agreements whose content shares some common elements.

12- The inclusion of a chapter on electronic commerce introduces another batch of asymmetries in the bi-regional relationship. The key aspects of the chapter include: free flow of data, source code protection and keeping national regulations as lax as possible for transnational corporations’ operations. The chapter seeks to freeze dominant position of large companies from the North and further their ability to concentrate wealth. Implementing these standards only deepens the transnational oligarchy in the digital economy and leaves little room for building policies for alternatives to a peripheral insertion of the economies of the region within the framework of the 4.0 Revolution.

Finally, we emphasise that this agreement will be a step towards an even more comprehensive free trade agreement that, with new added chapters, will create further threats to our peoples.

These are the 12 main reasons why we consider that the Mercosur - European Union Free Trade Agreement should not be approved.

We invite you to add your signatures to this document here