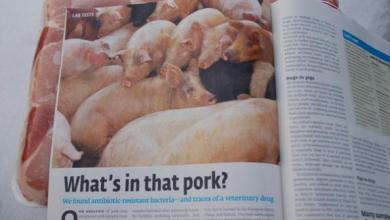 The January 2013 issue of Consumer Reports magazine featured an article claiming antibiotic-resistant bacteria and traces of ractopamine were found during an analysis of pork chop and ground-pork samples from around the United States. (Courtesy: National Hog Farmer)

Farming boss: TTIP must not rock the boat

The Transatlantic Trade and Investment Partnership the EU and the US are trying to establish is being called the "mother of all bilateral trade agreements", but negotiators must jump the potentially damaging hurdles of GMOs and hormone-raised meat and avoid rocking consumer confidence in either market, says Pekka Pesonen.

Pekka Pesonen is the secretary-general of Copa-Cogeca, the association of European farmers and agri-cooperatives, and former state secretary in the Finnish ministry of agriculture and forestry.

What are the main agriculture issues in the negotiations for a free trade agreement between the European Union and the United States? What are the problems that could arise? We feel that in the first round of negotiations the biggest stumbling block would be non-tariff barriers, meaning that we have some regulatory differences in the United States and Europe between these two trading blocks that may potentially create a barrier for trade.

What are the concrete issues that you might be worried after the signing of an EU-US FTA, an influx of GMOs, beef produced using growth hormones? Well, of course we have a number of issues on the table that are of some concern, not only for farmers but for the general public in Europe. From the US side, they also have some issues that are considered to be the kind of threshold elements for their negotiators. So clearly we may have some tough talks ahead of us.

Then if we take a look into some specific issues, I could raise one element that has already had some implications for these talks and that is meat inspections. The European Union is taking an approach where prevention is better than cure.

We, for instance, keep the whole food chain intact during the process, especially in slaughterhouses. We make sure, for instance, that we cannot wash the carcasses in general. Whereas the US, even though they have the same objective, they tend to use some treatment in terms of microbial treatment of carcasses, for instance.

And for us this is also a matter of cost. Our European slaughterhouses have had a lot of investment in this kind of European approach, and if we have once again a product for the marketplace that basically fulfills the same requirement of the objective but is produced in a way that is a lot cheaper and we can’t do the same then we cannot accept this.

The other issue is of course hormones, growth promoters in general, and we know that in the WTO [World Trade Organization], there’s a deal. There’s an arrangement for the hormone case. It’s a special allocation of import quota for non-treated, non-hormone meat, or beef, as a consequence of the dispute, and we feel that that should be maintained, because once again, our feeling is that the European Union decision makers wouldn’t accept that European own production would produce growth promoters to the same extent that the Americans [do].

Beef if a very good example for the hormone use but now we have also had ractopamine, which is a specific product for the pig meat industry. So therefore our concern is that once again, this comparable advantage that is given to our trading partners in using these growth promoters, if that was allowed in the European Union market, we would have had a major problem with it, because it is very clear that it is a competitive advantage that they would get from these products.

The third element could be, let’s say, in GMO authorisation, especially in the first round, to the market, meaning that we still have an asymmetric approval process between the United States and Europe, and that has created disadvantaged European producers, when it comes to the so-called presence of advantageous GMOs, especially in the instance of feedstocks. These, consequently, would create higher prices for our European operators on the very same product that our competitors are using to feed their animals, for instance in the United States.

Then there is the issue of geographical indicators, especially for wines and cheeses. Are there benefits to an EU-US trade deal for a country like France, whose agricultural sector relies on respect of its products’ origin? Well, we’re confident in Copa-Cogeca that saying that products like French cheese and wine are very competitive. So we have to be optimistic and we are optimistic, in the sense that we know that the American consumers would be interested in these high-quality products, including GIs [geographical indicators].

In this respect we have nothing to fear but then it’s more to do with the fact that do we get the benefits that we actually feel that we deserve in the US market and how the US entry to the EU market would translate to our reality and to our market access and what consequences would we have to the market.

We have to respect the market and not create uncertainty to consumers, because even if we maintain high standards but then we open the market to something consumers feel is to the detriment of the credibility of the market or, in the worst case, the safety of the food, which is not necessarily the case.

Therefore from a US-EU farmer’s perspective we have a common interest not to rock the boat at the end on either market, in the US or in the EU. Consumer confidence has to be maintained, no matter what.

… Because if consumer confidence is rocked either over here or over there it will affect both sides… In real terms, what we do is that we certainly don’t talk about food safety issues when we talk about US imports, because this is simply not the case. We don’t see people dying in the US [because of] food.

The EU and Canada recently signed a free trade agreement. Do you think it could be used as a template for TTIP, the EU-US trade agreement, more than other recent agreements, such as with India or Singapore? Well, I think there are two things. First of all, we can’t draw a parallel to any other trading partner per se. These are all unique cases, in both ways. In certain cases, the Canadian agricultural market is different to us in terms of, for instance, poultry. We never discussed poultry and eggs and this is certainly not the case, for the US. So we cannot draw a direct parallel.

However, what we could say is that there are two fundamental elements, two basic lines for the EU-Canada deal, from this point of view. That is that for the first time ever, we have a trading partner that has substantial agricultural interests, and agricultural production itself, that has acknowledged, recognised, European production standards, at least to a certain extent. And one of the big elements in this respect is the GIs. Even if it was not 100%, but the principle and the core concept of the GI was accepted.

So Canada accepted to include European GIs to some extent, on Champagne, cheeses. There was an issue to do with Greek Feta cheese… They didn’t accept 100% what the European Union has decided on the GIs but they accepted a substantial part of that, and we certainly welcome that. Also, when we talked about ractopamine, also the Canadians accepted that those exported volumes [of pig meat] to the European Union would have to be non-ractopamine. So in this respect, we see some welcomes signs.

But on the other hand, we are extremely concerned about the fact that we opened the European market to 50,000 and 80,000 tonnes of beef and pig meat, respectively, measured in carcass weight, and that may have a potential disrupting element to the whole market, and the balance to the EU pig meat and beef market. That’s why we are a bit concerned about that, to be frank.

So this is something you are concerned about. What are you going to be doing about it, waiting to see what the effects are? Of course the agreement has been signed… First of all, we, of course, analysed the whole package thoroughly and in detail, the EU-Canada free trade agreement as such. Then, of course, even when there are shortcomings or whatever, we would like to seek for a clarification or how that will work at the end.

Then, of course, we make an overall analysis of how that would work. We had some additional access to, they referred us specifically to cheese to the Canadian market but we had to accept these pig meat and beef volumes to the European market. And we have reason to believe there will be some risks involved but our role, in our organisation, together with our member organisations, is to make sure that these risks wouldn’t materialise, because we are there also to defend the interests of the sector.

In this respect, we’ll see in the coming weeks and months, what can we assume, what can we expect from the impact of the deal, and how that would work then. Of course, we then have a transitional period of X years and that means that we wouldn’t see the full impact immediately. But nevertheless, we have to be prepared for that.