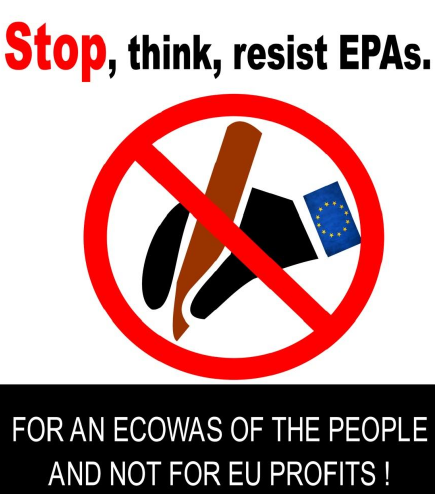 (Image: Fellowship of Christian Churches and Councils in West Africa)

Abuja to host conference on economic partnership between ECOWAS, EU

WorldStage Newsonline— An international conference designed to take a critical appraisal of the proposed Economic Partnership Agreement between Economic Community of West African States, (ECOWAS) and the European Union (EU) will take place in Abuja between July 28 and 29 2015.

The event is being organized by the leading pan-African newsmagazine Africa Today.

The EPA is a reciprocal preferential trade agreement being promoted by the EU to create a Free Trade Area [FTA] between the EU and the African, Caribbean and Pacific Group of States [ACP] through six regional economic communities into which the ACP is divided.

The ECOWAS Commission, one of the six regional economic communities, negotiated the agreement on behalf of the 16 countries in west Africa, including Nigeria. The agreement, which was concluded in July 2014 after 11 years of negotiations, has been contentious over the years. Nigeria expressed reservations over the agreement’s current form due to the perceived economic implications to its economy. When the agreement is signed African countries are expected to open their borders to goods and products produced in the EU with the EU reciprocating by allowing goods and products produced in Africa into their countries.

Publisher of Africa Today, Mr Kayode Soyinka, who announced the conference said is it expected to put the EPA on the front burner of national discourse, enlighten ordinary citizens and business people, examine the agreement’s pros and cons as they affect Nigeria’s economy and those of the countries in the west African sub-region and, indeed, Africa.

Mr. Soyinka said the EPA remained a thorny trade issue between Europe and Africa. The deadline for signing the agreement was missed last October and Europe is insisting it would not come back to the negotiation table.

The Abuja conference could not have come at a better time, at least for Nigeria. The country is Africa’s biggest economy and it has a new government in place; signing – or not signing - the EPA would be among its early major foreign policy actions. In addition, countries taking their cue from Nigeria’s reluctance to sign the agreement would want to know if the new administration would maintain the status quo or chart a new course relating to the agreement.

The Goodluck Jonathan administration had gingerly avoided signing the agreement for a number of years. At an Extra-Ordinary Session of the Conference of African Union Ministers of Trade in Addis Ababa, Ethiopia in 2014, the then Minister of Industry, Trade and Investment, Olusegun Aganga came out openly against the agreement saying it wasn’t favourable to Africa. This was despite progress made by some regional blocs towards finalising the pact.

Aganga said then: “Nigeria’s position on EPA is very clear. Africa is on the rise. It is a very big and strategic market for any trading partner. That is what the EU wants from us but Africa must jealously protect what it has. We must not sign an agreement without first of all carrying out a robust economic analysis of the overall impact the agreement will have on the region, our children and future generations.” Aganga’s position was supported by trade ministers from other African countries and AU’s Commissioner for Trade and Industry, Fatima Haram. The ministers, in backing Aganga, said the deal would have a long-term negative impact on the continent’s efforts towards industrialisation and job creation. It was even suggested at the meeting that should the negotiations continue along the same vein, Africa should consider other alternatives such as deepening intra-African trade ties and pushing for alternative arrangements with Brussels, such as the EU Generalised System of Preferences (GSP).

The trade ministers’ meeting was convened to discuss Africa’s common position ahead of the October 1 deadline for signing the EPA with EU; the establishment of the Common Free Trade Area, CFTA, by 2015; extension of African Growth and Opportunity Act, AGOA, by the United States for 15 more years and Africa’s strategic response to World Trade Organisation negotiations, among others.