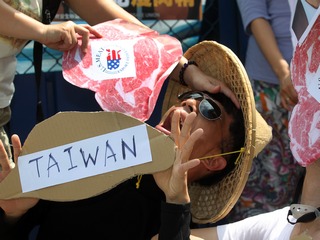 Taipei, June 8 (CNA) — A group of activists demonstrated at the American Institute in Taiwan (AIT) Friday to protest what they called Washington’s highhanded attitude in forcing Taiwan to open its doors to U.S. beef containting residue of the leanness-enhancing drug ractopamine.

The protest was organized by several civic groups, including the National Alliance for Food Safety and the Citizen Congress Watch.

Taiwan’s Legislative Yuan is scheduled to vote next week on a package of amendments to the Act Governing Food Sanitation that will pave the way for the entry of U.S. beef containing residue of the currently banned drug under strict conditions.

The activists sang ballads, performed skits and chanted slogans to highlight their cause.

In one skit, activists acted as U.S. President Barack Obama and AIT Director William A. Stanton forcing Taiwanese people to eat U.S. beef contaminated with ractopamine, a drug that is banned in Taiwan and dozens of other countries, over health concerns.

Chen Man-li, president of the Homemakers United Foundation, a key member of a national alliance for food safety, described the United States as one of Taiwan’s allies in the international community.

"Therefore, it should not be coercing Taiwan to import its ractopamine-contaminated beef, putting our people’s health at risk," Chen said.

Even though Taiwan is an underdog in international society, it should not need to seek international cooperation at the expense of its people’s health, Chen added.

Cheng Hsiu-chuan, head of the Wenshan Community College in Taipei, said the U.S. traditionally regards Taiwan as a friend.

"It should not back off that tradition by forcing Taiwan to import its drug-tainted beef. We should fight against such a move to win respect.Otherwise, we could be forced to compromise on more things or accept even more humiliating terms in the future," Cheng said.

A number of police officers were mobilized to keep the protesters away from the AIT’s main entrance.

The AIT, which represents U.S. interests in Taiwan in the absence of formal diplomatic ties, did not send any officials to meet the demonstrators.

The protest lasted for about 15 minutes and ended peacefully with no injuries.

(By Lin Shen-hsu and Sofia Wu)