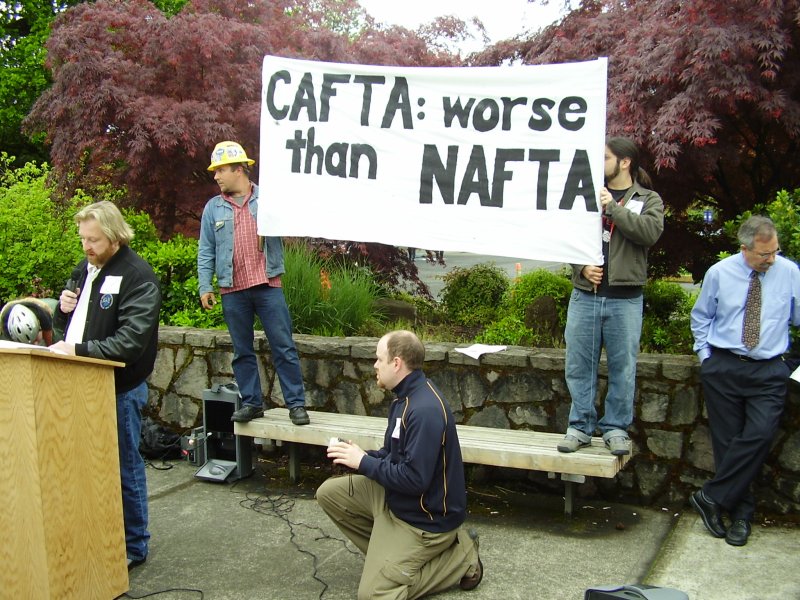 Trump officials are taking a very close look at the 2005 pact signed with six Latin American nations to see if they can block Nicaragua, the Dominican Republic and El Salvador from keeping preferential access to U.S. markets without disturbing the rest of the agreement.

“We are very concerned with Nicaragua’s move toward authoritarianism, and El Salvador’s and Dominican Republic’s questionable ties with China,” the official said. “As the United States has made clear, we will not allow our trade agreements, including CAFTA-DR, to become back doors to benefit non-market economies and repressive actors in the region.”

Eliminating the three countries from CAFTA or CAFTA-DR, as it’s best known, would not necessarily block them from selling goods to the United States, but they would be subject to higher tariffs that were in place before the 2005 agreement was signed.

The fact that the United States is turning its sights on the Central America agreement is not necessarily a surprise. Since President Donald Trump announced plans to rework NAFTA, leaders across the Western hemisphere expected the administration would eventually turn its attention to their agreements and apply similar changes. NAFTA served as a template to the rest of the 11 free trade agreements in Latin America.

Nicaragua, El Salvador and the Dominican Republic are also countries that have found themselves recently in Trump’s crosshairs.

The Trump administration has been slapping sanctions and increasing economic and political pressure in Nicaragua as the Ortega government has increased its authoritarian power. The administration pulled its ambassadors out of El Salvador and the Dominican Republic last year after the two countries broke diplomatic ties with Taiwan to get closer with China, a U.S. trade adversary that the administration has accused of a “predatory economic activity.”

CAFTA was never just about trade.

When Congress ratified the agreement, President George W. Bush declared it as a way for the United States support democracy and economic reform after years of civil war and communist insurgencies.

“A part of the world that was once characterized by unrest and dictatorship now sees its future in free elections and free trade, and we must not take these gains for granted,” President George W. Bush said at the time. “By transforming our hemisphere into a powerful free trade area, we will promote democratic governance and human rights and the economic liberty for everyone.”

Eric Farnsworth, who was involved in the NAFTA negotiations as an official with the U.S. Trade Representative and later outside the government pushed for CAFTA, said it makes sense that the United States would want to take a second look at whether Nicaragua should continue to receive special access to U.S. markets after it’s “gone off the democracy track.”

“Trade is a tool, but not a panacea,” said Farnsworth, who is now a vice president of the Council of the Americas in Washington. “The question is, is it leading to the impact that we seek or is it providing an economic lifeline to an authoritarian dictatorship? That is what we need to take a hard look at.”

The concern with El Salvador and the Dominican Republic is whether their positions in CAFTA has given China backdoor access to United States markets.

The administration clearly sent a signal with the revised NAFTA about its intentions for China. One of the perhaps most significant, but lesser-known elements of the new United States-Mexico-Canada Agreement, is a small section of the text that allows the United States to pull out of the USMCA if one country pursues a separate free trade agreement with a “nonmarket country,” which is largely seen as a warning against pursuing separate free trade agreements with China.

“It’s not a formal connection in the sense that what happens in NAFTA is related to his, but it’s the same impulse,” said Eric Miller, a trade consultant who has worked for the Canadian government and continues to advise them on the negotiations. “What it is fundamentally is the United States is concerned about growing Chinese influence in the hemisphere. And they’re looking at all the instruments they have to take on that influence.”

The administration still has many difficult discussions to make. Officials must find a mechanism to eliminate Nicaragua and the Dominican Republic from the agreement. There is no specific democracy clause in the agreement.

“No one could fathom there would be such a breakdown in the signature countries,” said José Cárdenas, who served in the National Security Council under George W. Bush and regularly speaks with Trump administration officials.

Miller sees no easy mechanism to kick out the three countries out, but said it can be done. One way, he said would be for officials to suspend them based on national security concerns.

“A national security lens is becoming this administration new favorite justification for anything dealing with Latin America,” Miller said.

Cárdenas said the administration must also be careful that any changes impact the government leaders and not the citizens who they largely want to protect.

“It’s the policy makers toughest call,” Cárdenas said. “How to respond to the breakdown in Nicaragua without making the lives of ordinary Nicaraguans works. But you can’t walk away.”