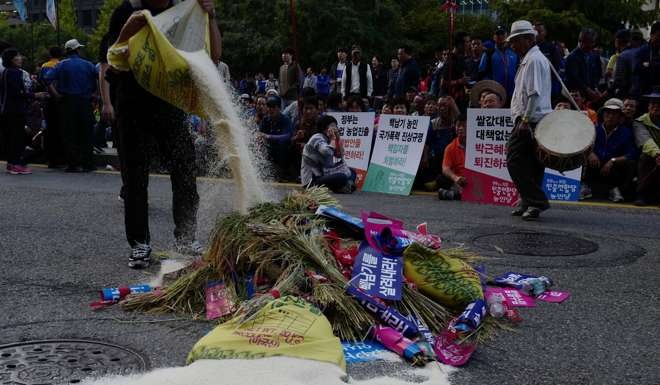 Agriculture minister says no to FTA changes on rice imports

South Korean Minister of Agriculture, Food and Rural Affairs Kim Yung-rok said Thursday he would not concede to any demand for an increase in rice imports from the US when talks begin regarding modifications to the Korea-US Free Trade Agreement.

The agriculture minister said the farming industry had been struggling since the FTA came into effect five years ago, as Korea’s rice prices continue to plunge, with farmers blaming an increase in rice imports.

“It is not a simple task, but I will do what I can to reduce rice imports,” Kim said, during an interview with Yonhap News Agency. “The farming industry has already been damaged by US imports of fruits and other products, so it is not logical for the US to put pressure on our agricultural sector to further open up.”

“On the contrary, I will try to find out if there is anything that we can demand from the US,” Kim said, adding that rice represents a cultural identity and sense of pride for Korea and therefore should not be seen as a bargaining chip.

US President Donald Trump has blamed the Korea-US FTA for the US’ deepening trade deficit and vowed to modify or terminate the trade deal under his “America First” policy.

US Trade Rep. Robert Lighthizer recently sent Korea’s Ministry of Trade, Industry and Energy a formal request to hold a joint meeting to begin discussions on revising the FTA within 30 days. The Korean government responded by saying the timeline may not be realistic, as the country has not yet appointed its new trade minister. An official date for the FTA revision meeting has not been set.