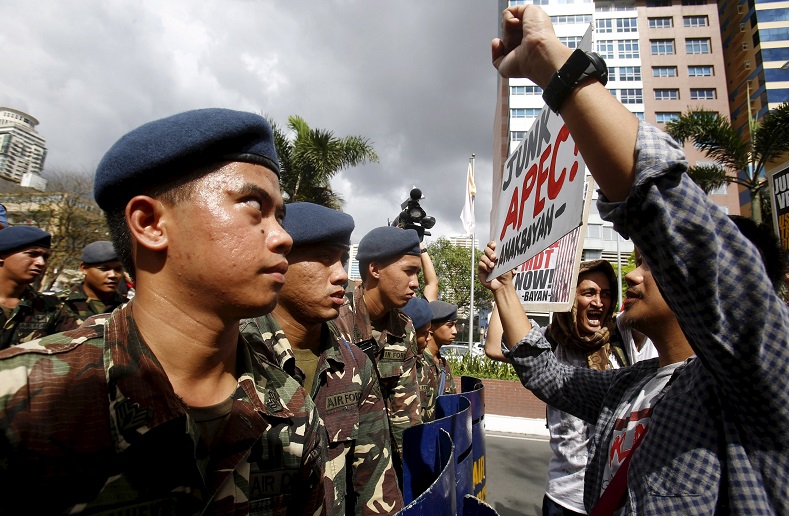 MANILA — Leaders of 21 Asia-Pacific economies agreed to push forward with a wider free trade agreement, even as U.S. and China form their own free trade blocs to gain greater influence in the region.

"We reiterate our belief that the Free Trade Area of the Asia-Pacific should be pursued as a comprehensive free trade agreement by building on ongoing regional undertakings," said leaders from the Asia-Pacific Economic Cooperation forum in a statement following a two-day meeting in the Philippine capital.

China, one of the strongest backers of a regionwide agreement, used its APEC chairmanship last year to call for for a study on ways to expedite the proposed trade pact.

FTAAP aims to create a free trade zone that would bring together the Beijing-backed Regional Comprehensive Economic Partnership and the Washington-led Trans-Pacific Partnership.

TPP negotiators from 12 countries reached a framework agreement in October. With TPP founding members Malaysia and Vietnam possibly gaining competitive edge, Indonesia and the Philippines, both parties to RCEP, have expressed renewed interest in joining the U.S.-led free trade zone.

"We note the recent development on the free trade agreements in the region and the progress of the possible pathways to the FTAAP, including the finalization of TPP negotiations, and we encourage the early completion of negotiations for RCEP," the leaders said.

The U.S. and China are using their respective trade groupings to jockey for influence in Asia, the world’s most populous and fastest-growing region economically. Speaking to Asia-Pacific business leaders on Wednesday, Chinese President Xi Jinping expressed concern about the proliferation of free trade deals.

"With various new regional free trade arrangements cropping up, worries about fragmentation are on the increase," he said. "We need to accelerate the realization of FTAAP and take regional economic integration forward."

Although the TPP talks have wrapped up, the agreement has yet to undergo parliamentary scrutiny in many of its member countries. Meanwhile, some parties to RCEP have yet to address sensitive trade issues in their countries.

Turning to other matters, the APEC leaders also condemned the recent terrorist attacks in Paris and Beirut, as well as the bombing of a Russian airliner. "We will not allow terrorism to threaten the fundamental values that underpin our free and open economies," they said. They also reiterated their commitment to protect the environment ahead of the U.N.-sponsored Paris Climate Change Conference, which starts Nov. 30.