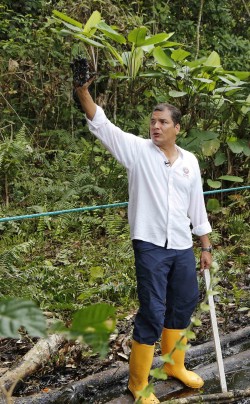 Dolores Ochoa/Associated Press - Ecuador’s President Rafael Correa shows his oil covered hand at the site of the Aguarico 4 oil field in Ecuador, Tuesday, Sept. 17, 2013. Correa visited the site to call attention to oil contamination in Ecuador’s Amazon region. Earlier this year, Ecuador awarded a $19 billion judgment to the residents of this area for Texaco’s contamination of this rainforest between 1972 and 1990. But Chevron Corp., which bought Texaco in 2001, said it won’t pay because it says Texaco dealt with the problem before it was bought.

QUITO, Ecuador — Plaintiffs’ hopes for collecting a $19 billion judgment awarded by an Ecuadorean court against Chevron Corp. for oil contamination in the Amazon have suffered another potential setback.

A three-judge international arbitration panel in The Hague has ruled that an agreement signed in 1995 by Texaco Corp., which Chevron later purchased, released the oil giant from financial responsibility from any claims of “collective damage.”

However, the interim ruling Tuesday by the Permanent Court of Arbitration left open the possibility that Chevron could still be liable for damages incurred by individuals.

Chevron has been fighting in multiple courts on three continents litigation that began two decades ago and led to the February 2011 judgment and award for contamination caused by a Texaco-led consortium in Ecuador’s Amazon rainforest between 1972 and 1990.

U.S.-based Chevron insists it was absolved of all responsibility for the pollution by the 1995 cleanup agreement. It is refusing to pay, and both sides in the legal battle have accused each other of fraud.

Chevron has no assets in Ecuador, so the plaintiffs have sought to force payment in Canada, Brazil and Argentina, so far without success.

Chevron’s general counsel, Hewitt Pate, said in a statement that Tuesday’s ruling “confirms that the fraudulent claims against Chevron should not have been brought in the first place,”

Ecuador’s foreign minister, Ricardo Patino, responded via Twitter that “Chevron continues its campaign of lies” by claiming that the Hague tribunal absolved it of responsibility when that simply was not the case.

What the tribunal left pending was the question of whether the successful lawsuit and record judgment against Chevron could be classified as having caused “personal harm” to individuals. It also did not rule on Chevron’s claims for monetary damages.

Chevron brought the case before the arbitration panel, which operates under U.N. auspices, in 2009 claiming Ecuador was in violation of a bilateral investment treaty with the United States.

President Rafael Correa this week launched a campaign seeking a global boycott on Chevron over its refusal to pay the judgment. He visited a jungle waste site, stuck his hand in oil and lifted it for the cameras.

On Thursday, he was visiting Argentina and meeting with its president, Cristina Fernandez.

Correa denied any friction with Fernandez over the deal.

He told reporters that had Fernandez “been president of Ecuador while Texaco was destroying Ecuadorean jungle, she never would have permitted it.”

The next arbitration hearing in The Hague, in January, will address Chevron’s claims that the judgment against it was fraudulently procured. ___