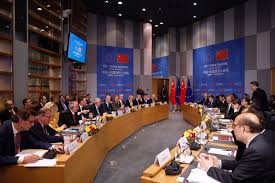 Are EU-China trade relations at a crossroads?

Unmoved by a flurry of sporting metaphors about level playing fields and clearly not worried by the muted but polite threats about its human rights record, China will have logged out of this week’s virtual summit with the European Union feeling pretty pleased with how it all went.

The indications before the meeting had been that European leaders were livid about the Xinjiang so-called "reeducation camps" and the brutal oppression of Uighur Muslims in Xinjiang, about the National Security Law in Hong Kong and the clampdown on freedom there, about ongoing trade imbalances and a lack of reciprocity for European companies.

Instead, there was nothing substantive in the EU response from the summit that could not have come out of any EU-China summit in the past two decades.

European Commission President Ursula von der Leyen said the bloc was "really serious" about getting better access to China’s market and said "China has to convince us that it is worth having an investment agreement."

Glaring differences Although the rhetoric was a bit sharper, never far from participants’ thoughts is the fact that with more than a billion euros a day in bilateral trade, the EU is China’s top trading partner.

The big question is how will Europe be able to conclude negotiations of the China-EU Comprehensive Agreement on Investment (CAI) within the year if there are such glaring differences on market access, Hong Kong and Xinjiang?

"Virtual summits show virtual results! In these tough times some may laud that the EU and China are still engaging in dialogue but the summit had nothing to show for it," Fraser Howie, an author and former banker who writes about China’s financial system, told DW.

Germany holds the EU presidency and Chancellor Angela Merkel had words of warning about camps in Xinjiang, the crackdown on freedom in Hong Kong. But she also spent a lot of time talking about selling Munich beer and German wine to China.

"Merkel failed to elicit any concessions or progress on the long-sought CAI although the EU was perhaps tougher than it had been in the past when raising objections to China’s growing list of human rights abuses. The odds that Merkel will end her political career with an EU-China investment treaty look ever more unlikely," said Howie.

US a complicating factor President Donald Trump’s maverick style has alienated most of the senior EU leadership, to the point that Europe is keener to cooperate with a systemic rival like China rather than find common ground with its historical ally, the United States.

And while the US is imposing tariffs and sanctioning human rights abuses, such as this week’s move to ban products made by forced labor in Xinjiang, the EU remains hobbled by different member states pursuing their own economic interests.

China chiefly sees the EU as a counterweight to the United States, with whom it is locked in a damaging trade war. It has successfully sown division among European countries by doing bilateral economic deals with the shakier elements within the bloc, like Greece and Italy.

In recent weeks, Xi Jinping has focused on his latest policy aimed at shoring up support for the Communist Party, the Dual Circulation Strategy (DCS). Analysts are struggling to see exactly what it means, but it seems a vague, politically driven strategy to boost self-reliance, encouraging both exports and imports, as the Chinese economy becomes decoupled from the US.

It would have been President Xi Jinping’s first meeting with all 27 heads of state from the bloc.

Does China care at all? And meanwhile, China’s broad recovery from the coronavirus pandemic continues apace, as retail sales grow for the first time in 2020 and industrial production grew by 5.6% in August from a year earlier.

Against this backdrop, it was hard to shake the feeling that China no longer particularly cares what the EU thinks. Indeed the language was more aggressive than usual.

"China firmly opposes...meddling in China’s internal affairs by any country," said Xi. "The Chinese people will not accept an instructor on human rights and we oppose double standards."

Germany is very heavily focused on the investment treaty with China. This will form part of Merkel’s political legacy and is meant to act as the basis of a free trade agreement at some point in the future. That point looks very distant indeed.