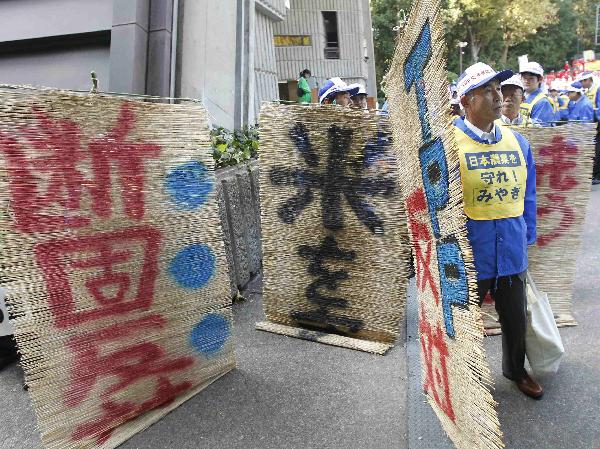 Asia is "not ready yet" for Trans-Pacific Partnership

The term ’TPP’ (short for Trans-Pacific Partnership) seems to be on the lips of every Japanese — most especially the nation’s farmers who spit it out as a term of absuse in describing what they see as an attempt by prime minister Naoto Kan’s government to sell out Japanese agriculture.

They have rallied in their thousands in Tokyo’s Hibiya Park and in Yokohama during the APEC summit there last week, to protest aganst the idea of Japan joining what is often described as a "high level" free trade or economic partnership agreement which involves sacrifcing sacred cows.

The farmers are right to object to the TPP (even if perhaps for the wrong reasons) because it has all the marks of being an accord that most of Asia is not yet ready for but which Kan is promoting in an apparent desire to curry favour with Washington.

The history of regional trade liberalisation in the Asia Pacific Region was already strewn with acronyms long before the TPP came along. Most people, including Japanese farmers, neither knew nor cared what these stood for.

The best known was ASEAN (Association of Southeast Asian Nations) but others such as EAFTA (East Asian Free Trade Area or ASEAN+3) or CEPEA (Comprehensive Economic Partnership for East Asia or ASEAN+6) were obscure to most people who neither kndew nor cared what they stood for.

Likewise it hardly made front-page news when in 2006 the US proposed a Free Trade Area of the Asia Pacific (FTAAP). But farmers, politicians and others in Japan and elswhere suddenly got very worked up when it began to look as though the road to FTAAP would be via the TPP.

Ditching all the acronyms, what this means in simple terms is that Asia is expected to sign up to a very advanced and demanding form of trade and economic cooperation before many countries are ready for it and before they have climbed more than the first few rungs of the development ladder.

A bit of historical perspective is needed in order to understand this. The World Trade Organisation’s Doha Round of multilateral trade negotiations has been bogged down for years now because the WTO is pushing into far more sensitive areas — such as agricultural and service sector liberalisation — than was the case in past Rounds.

Bilateral and regional free trade agreements (FTA)s were seen by many WTO member countries as a way round this impasse because they provided a means by which parties to such agreements could pick and choose which sectors they wanted to liberalise and which to protect, on a case by case basis.

In the Asia-Pacific region alone, such agreements have proliferated to the point where (according to ADB president Haruhiko Kuroda) there are now more than 200 of them compared to just two some 20 years ago. They are often referred to as a "spaghetti (or noodle) bowl" of arrangements.

No-one seemd to mind too much about the fact that many FTAs had conflicting rules (over such things as how much of a product had to be produced in a country from which it was exported in order to qualify for tariff concessions) because of the generally undemanding nature of the agreements.

But enter the TPP and things changed. It required members to eliminate barriers — tariffs or "border" barriers and non-tariff or "behind the border" barriers (such as customs procedures) within a period of ten years from entry, and to do so not only for manufactures but also in agriculture and services — a very tall order indeed.

The TPP was formed among four smallish economies (Brunei, Chile, New Zealand and Singapore) in 2004 and as such did not excite region-wide (let alone worldwide) interest. But then two elephants — the US and Australia, as well as Vietnam and Malaysia — entered the room and Japan too showed interest, along with South Korea.

Setting aside the obvious issue of what happens to China and others if they are left out of the TPP club, the very idea (so favoured by the US and Australia/NZ) of very deep, multi-sector liberalisation in trading of goods, services and people is anathema to some in Asia (not least Japanese) farmers.

The likes of America and Australia want the TPP because it gives their mass production agricultural sectors (or manufacturing ans service sectors for that matter) the chance of charging into Asian markets that would no longer be protected by tariffs and other trade barriers. But others see things differently.

The backlash from the Japanese farming lobby against the TPP is already looking savage and it seems safe to predict that this will prove to be the case elsewhere in Asia as negotiations on the TPP push on apace. The agreement could founder before it is even launched because of its demanding nature.

Japan’s prime minister Kan may not have produced the idea of Japan joining the TPP exactly at the last minute "out of a hat" but he certainly seemed in a hurry to see Japan make a commitment to mebership before Japan’s year as host of the APEC process in 2010 was over.

But his Cabinet sensed political trouble ahead when it signed off on a general policy toward free trade agreements during October and it hedged its bets on the TPP, saying only that Japan would "open consultations" with other members before deciding whether or not to join.

Setting aside the fact that Japanese farmers could burn Mr Kan in effigy (or perhaps just stop supplying food to Japan’s 120 million people) if he insits on pressing ahead with his pledge to secure an agricultiral reform programme by next June, there is the question of what happens to China.

No-one seems to care whether China and other Asian economies will be willing or able to enter the TPP anytime soon, and China is known anyway to favour getting to FTAAP via EAFTA (so to speak) rather than taking the so-called high road of the TPP. In other words, China wants an Asian FTA that is truly asian and not seen as US-driven.

Attempting to force the pace of trade and other liberalisation can be as much short-sighted as visionary, especially if it results in ideas such as the TPP going to same way as the Doha Round. National leaders need to think through the full economic and cultural impact of liberalisation before offering unrealistic pledges in fora such as APEC or the G20.

Globalisation (always a rather ugly word) has become something of a dirty word too in the wake of the global financial crisis. It culd become an unspeakable term if the concept is pushed too far and too fast. But maybe history has to proceed in this way, by stops and starts, progression and regression.

The fruits of excessive zeal to liberalise or globalise could turn out to be bitter ones if the process results in trade protectionism, currency wars, capital controls and a more generalised backlash in the form of growing economic nationalism.

For all the opprobrium heaped on bankers since the global financial crisis erupted, and for all the work that has been put into formulating new regulatory regimes, huge sums of money are still free to circulate around the world without restraint, fuelled now by a glut of dollars.

These flows are being used to punt on national currencies (as well as equites and real estate), causing rapid appreciation of exchange rates,in emerging markets especially, and resulting in inflation and the imposition of capital controls in some cases. A kind of globalised 1997 Asian crisis.

The reaction of emerging economies has been to attempt competitive depreciation of their currencies — a currency war in other words — but it is obvious these attempts are doomed to failure if the US Federal Reserve continues to print money on the scale that it has been doing recently.

So, we could see protectionism erupting in national monetary regimes (capital controls) just when trade protectionism is also threatened, not just as a result of stagnant economic growth in advanced economies but also because of attempts to promote deeper forms of trade liberalisation.