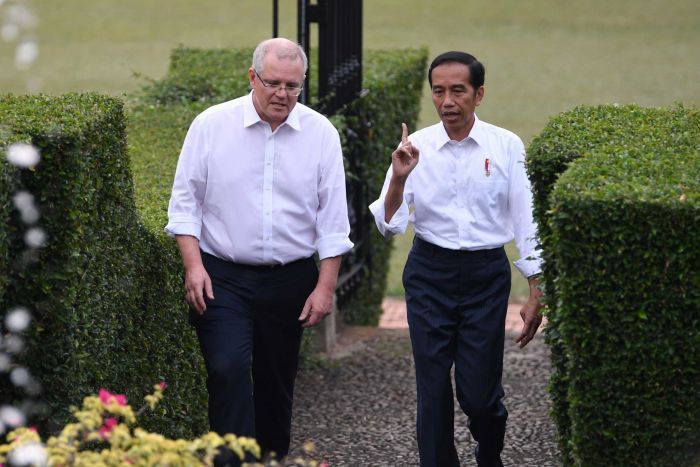 Indonesia and Australia announced the conclusion to talks on a free-trade deal as the Pacific neighbors attempt to boost economic ties.

In his first overseas trip since becoming Australia’s prime minister last week, Scott Morrison met with President Joko Widodo in Bogor, outside the capital Jakarta, where they committed to finalizing the Indonesia-Australia Comprehensive Economic Partnership Agreement. The two also signed memoranda of understandings on transport, the creative economy and cyber security cooperation.

Both Morrison and Indonesian Trade Minister Enggartiasto Lukita told reporters the IA-CEPA, an agreement years in the making, would be signed by November.

"Now we need to work on the legal scrubbing and the translations in two languages, which will be completed and signed this November. But there will be no more negotiations." Lukita said.

Although the deal was negotiated at the direction of previous prime minister Malcolm Turnbull, who lost the leadership in a ballot of ruling Liberal party lawmakers last week, it will be seen by the business community as a sign of continuity under Morrison. Talks to start the pact began in 2010 before stalling amid diplomatic tensions; they were revived in March 2016, and have had to overcome key hurdles including Australia’s push for more beef imports into Indonesia and removal of barriers and tariffs on Indonesian products such as paper and palm oil.

A target to complete the deal in 2017 was missed. That year, two-way trade of goods between the nations was A$11.2 billion, making Indonesia Australia’s 14th-largest trading partner.

Under the agreement, Australian farmers will be able to export 500,000 tonnes of feed grains such as wheat into Indonesia tariff free. Australian industrial producers of steel, copper and plastics also stand to benefit, along with service industries including health, mining, telecommunications, tourism and education.

It would also pave the way for Indonesian car makers to export to Australia, Lukita said, while Indonesia and Australia would enjoy a zero import tariff for many goods, which could significantly increase Indonesian exports.

Both countries will continue to collaborate on regional and global issues including terrorism, Widodo said.

As treasurer from September 2015 until last week, Morrison, 50, has been an advocate of globalization. Since coming to power in 2013, his Liberal-National government has secured free-trade deals with major partners including China, Japan and South Korea, and has played a role in reviving the Trans Pacific Partnership after the U.S. withdrew.

That stance has become more difficult to maintain in the era of President Donald Trump. Former education minister Simon Birmingham, who took the trade portfolio from Steve Ciobo last week, has been tasked with helping to secure deals with India and the European Union.

Relations between Australia and Indonesia improved under Turnbull after a series of scandals and spats caused tensions between the neighbors. They agreed to restore full military cooperation in February 2017.