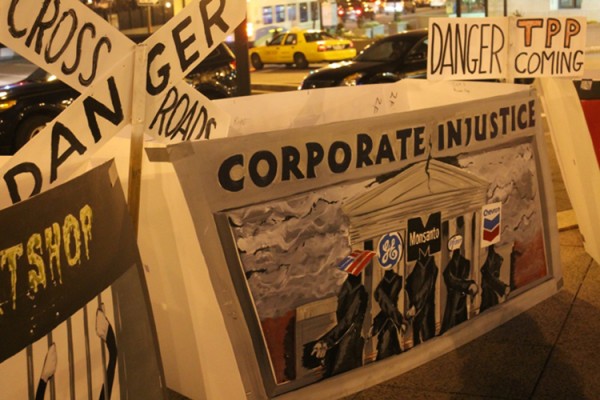 Australia’s stance in IP negotiations: ‘That didn’t work, let’s do it again.’

Doing the same thing over and over again and expecting a different result is meant to be one definition of insanity. It’s also a pretty good definition of poor policymaking. Another sign of really ordinary policymaking is doing the same thing over and over without ever assessing whether it actually works as promised. Sorry to say, I’ve just described Australia’s approach to negotiating the intellectual property chapters in free-trade agreements. These chapters set rules relating to copyright, patent, trade mark, including how copyright gets enforced online and for how long, and how we balance incentives for pharmaceutical development with questions of access to medicine.

The Australia-US Free Trade Agreement (AUSFTA) turned 10 this year. A perfect opportunity, you would think, to assess the successes and failures of past agreements, like AUSFTA. Did we get it right? Could we do better? Before we do the same again, have any problems emerged of which we should be careful?

AUSFTA was a big deal in copyright: it required Australia to significantly rewrite copyright law. The Department of Foreign Affairs and Trade (DFAT) claimed this would help copyright owners; that harmonising protection with the US and raising protection would ensure creators reaped the rewards of their creativity. On the other hand there were those (mostly on the user/consumer side) who claimed it was the end of the world as we know it, and that the cost of copyright-protected material would just rise and rise.

In a new paper I went back to try to assess all these claims on the evidence I could find. What did AUSFTA really do for copyright owners? It’s not just an academic exercise, because if it really hasn’t worked — if copyright owners aren’t demonstrably better off — this raises serious questions about how we should be negotiating new agreements. Right now, we’re deeply engaged in negotiating a whole range of new agreements — not just the China, Japan and South Korea FTAs concluded in 2013-14, but new, and bigger deals. These include the Trans-Pacific Partnership Agreement (TPP), an unwieldy beast of a negotiation spanning countries in South America, south-east Asia and Australia/New Zealand that seems to be stumbling along slowly, if at all, after countries failed to reach agreement in July. There is also the lesser-known Regional Comprehensive Economic Partnership (RCEP) involving ASEAN and ASEAN’s free-trade partners. All involve discussions about copyright.

Australia’s copyright negotiating positions are not made public (and there’s a whole other debate in itself), but all the evidence suggests that DFAT took the approach, and many of the copyright rules in AUSFTA as its own model in subsequent negotiations. Look at the Korea agreement especially, but also the Japan agreement, and it seems that DFAT decided the AUSFTA model was a great thing that should be replicated across future trade deals.

The thing is, there really isn’t much evidence that AUSFTA did anything of tangible benefit for creators. I looked at the industry’s own figures on sales, income and employment, and there isn’t even a blip in the figures that you could seriously attribute to AUSFTA and raised copyright standards: there’s just not a lot of up or down movement. Nor is there much evidence of massively increased costs attributable to AUSFTA — largely unrelated legal and business decisions, and the global financial crisis, seem to be far more important.

One impact of AUSFTA’s new copyright rules was clear: it has made useful law reform harder to do. Precisely because AUSFTA’s rules are so detailed, prescriptive and, in many cases, technology specific, copyright law has become harder to adjust when business models or technology change. Ironically (since it has often been the larger copyright owners that have supported IP in trade agreements), AUSFTA has complicated efforts to strengthen enforcement; when the Australian government first proposed rule changes to make ISPs do more to police infringing users, the initial proposals favoured by copyright owners were inconsistent with the rules in AUSFTA.

In sum, it looks like agreeing to detailed new copyright rules in a trade agreement with the US has done little or nothing to improve the incomes and livelihoods of creators, but has made it harder to engage in useful reforms. And yet, as far as I can tell, we’re repeating it in current negotiations. So much for evidence-based policymaking.

What is worse, we’re swimming against the tide here. Australia’s new approach stands in stark contrast to the stance of comparable countries with a common copyright heritage and a similarly advanced economy, such as Canada or New Zealand, which have both adopted a stance much more similar to Australia’s pre-AUSFTA stance: supportive of multilateral negotiations; cautious about raising standards above international standards; and concerned to preserve domestic policy flexibility. Even other countries already subject to a US free-trade agreement and a similar IP chapter, like Singapore, have not extended that approach in their other trade negotiations. Australia’s “deputy sheriff” approach is looking increasingly isolated.

The Productivity Commission is now looking at Australia’s IP system, including its negotiating stance. To my mind, a change in stance can’t come soon enough, if we want to have any chance of sensible copyright law in the future.