David Adamson Senior Research Officer at The University of Queensland

Ten years on from the Australia-US Free Trade Agreement, Australia is entering another round of negotiations towards the new and controversial Trans-Pacific Partnership. In this Free Trade Scorecard series, we review Australian trade policy over the years and look at where we stand today on the brink of a number of significant new trade deals.

A combination of dumb luck, geographical isolation and a zealous stance on quarantine has kept Australia relatively free of the many pests and diseases that can be spread by international agricultural trade. As a result, it has been spared many of the health threats and extra farming costs – not to mention irreversible damage to native wildlife – that come with the arrival of these pests, or with changes to food safety.

Strict food safety standards are often seen as market protectionism or barriers to trade, rather than what they also are: important protection measures for the consumers who will eat the food. Yet within the current round of trade negotiations it is likely that the United States will continue to put pressure on Australia to water down its regulations.

While Australia’s current regulations are not perfect, it is important that any discussions about reforming them are conducted with an eye first and foremost on the health and safety of Australians, and are not unduly influenced by trade concerns.

More than 70% of Australian agricultural income is from exports. Consequently, our exports must meet importing countries’ expectation of being “free” of pests and residues – meaning that no living pests (plant, animal, or disease-causing microbes) are found in the product, and that any chemical residues are within agreed international limits.

Australia has an excellent international reputation for clean and green production. Because we are free of many trade-hampering pests, and because we specialise in low-input, low-output production systems, this freedom has allowed Australia’s process for regulating chemical use in agriculture, veterinary products and humans, to differ from many other countries.

In many cases, this has raised the costs an individual farmer faces when using chemicals, and given them fewer choices for how to manage crops and livestock. But for some industries this combination of costs and choices has slowed the rate at which pests develop resistance to chemicals, and as a result total production costs are lower than their international competitors. It has also helped those same farmers meet international safety standards and maintained the pristine reputation of their products.

One Australian tactic has been to use separate antibiotics for humans and animals. Countries that do not do this, such as the United States, can suffer much higher rates of drug failure.

As shown below, Australia and the United States use antibiotics at about the same rate, yet the resistance level is more than 30% higher in the latter. Australia’s relative pest- and disease-free status gives its exporters a significant market advantage, and allows them to demand a price premium amid increasing public awareness about food safety. For example, in 2004 and 2005 Australia dominated the lucrative Japanese market for beef and veal when Japan halted US imports in response to the BSE outbreak. 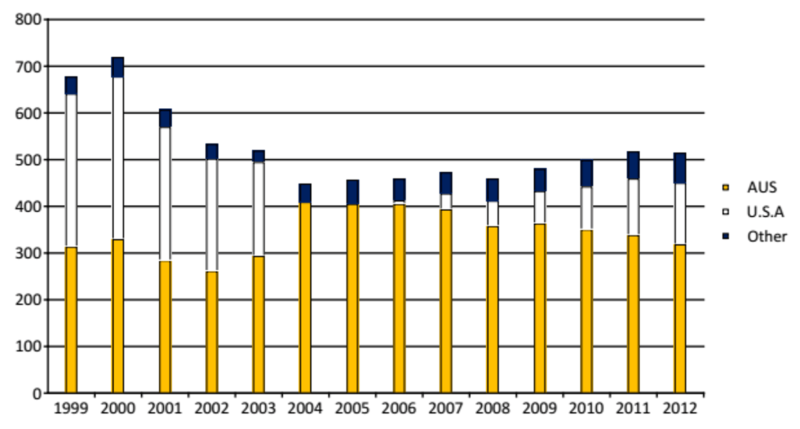 Japanese beef imports, showing how Australia profited when the BSE outbreak caused confidence in US beef to slump. Department of Agriculture

As food can be contaminated anywhere from paddock to plate, each stage of the process needs to be monitored. Although consumers’ preference for safe food may not always translate to higher prices, their refusal to buy food identified as potentially unsafe can be immediate and catastrophic for any exporting country that is identified (even incorrectly) as a source.

Australia has a clear interest in maintaining the integrity of its regulations for plant and animal health and food safety. But its more stringent regulations have long been in the sights of our trading partners, who would prefer that our high standards be “harmonised” with their less stringent ones, to “facilitate trade”.

With Australia now embarking on increased economic integration with the US thorough the Trans-Pacific Partnership negotiations, the question of Australia’s stringent food safety standards will no doubt be a key topic of discussion.

The United States has often argued that, in the absence of international standards of chemical use, American standards should be used. In 2007, this approach led Canada to lower its standards to match US settings.

The United States is currently grappling with the issue of updating its food standards, and is struggling to balance the need for public safety with private costs. So far, the goal of minimising private costs seems to be winning.

Bringing chemical and food standards into line with the United States is clearly in America’s interest. But there is little evidence that harmonising Australia’s more stringent standards with America’s less stringent ones would benefit Australia, either economically or socially.

Meanwhile, Australia is in the midst of a drive to reduce red tape, while also pledging to subsidise access to farming and veterinary chemicals, and to review its food safety settings, both domestically and overseas.

It is true that higher regulatory standards can often cost more. But the economic and social consequences of leaving Australians open to new and unknown food safety risks are likely to be much worse.

This article draws on research prepared for the 2014 Workshop “Ten Years since the Australia-US Free Trade Agreement: Where to for Australia’s Trade Policy?”, sponsored by the Academy of the Social Sciences in Australia and Faculty of Arts and Social Sciences, UNSW Australia.