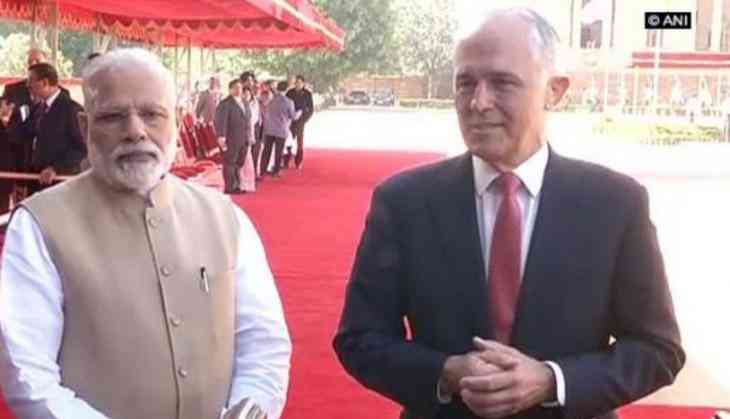 India and Australia agreed on Monday to revive stalled talks on a bilateral trade deal but, on a visit to New Delhi, Australian Prime Minister Malcolm Turnbull conceded that chances of an early breakthrough were slim.

Instead, Turnbull said he was prioritizing an Asia-Pacific forum that includes China, amid concerns over access to India’s market of 1.3 billion people for farm exports from Australia and opportunities for skilled Indian workers there.

After meeting Indian counterpart Narendra Modi, the Australian leader said that the two had agreed to make a fresh push on a proposed bilateral Comprehensive Economic Cooperation Agreement (CECA).

"We had a very good discussion about the CECA, and I think it’s fair to say that progress has not been as fast as either of us would like it to be," Turnbull told a joint news conference.

"We will ask our negotiators to schedule an early meeting to get the process moving."

Turnbull is in the company of other foreign leaders, including Britain’s Theresa May, who have found Modi a tough interlocutor on trade.

And, even though the two sides agreed to a fresh round of discussions, he made it clear his priority was now the broader Regional Comprehensive Economic Partnership (RCEP).

The RCEP has emerged as Australia’s main opportunity to bolster its trade prospects after U.S. President Donald Trump pulled out of another, broader, trade deal, the Trans-Pacific Partnership, after taking office in January.

It groups the 10 members of the Association of Southeast Asian Nations and a further half-dozen countries, including India, with which ASEAN has free trade deals.

Speaking earlier to Australian journalists, Turnbull said "we’ve got to be realistic about timing" for a bilateral deal with India. "It’s important to have an agreement that meets your requirements," he said.

Bilateral trade with India has doubled over the past decade to around $20 billion, Turnbull also said, but that was a fraction of what it could and should be.

Turnbull, on a three-day visit to New Delhi and Mumbai, was joined by a business delegation and heads of academic institutions. Australia is second after the United States as the most popular foreign destination for Indians studying abroad.

"When there is a genuine shortage of skills, we can bring in skilled persons from overseas - a great many of those have come from India."