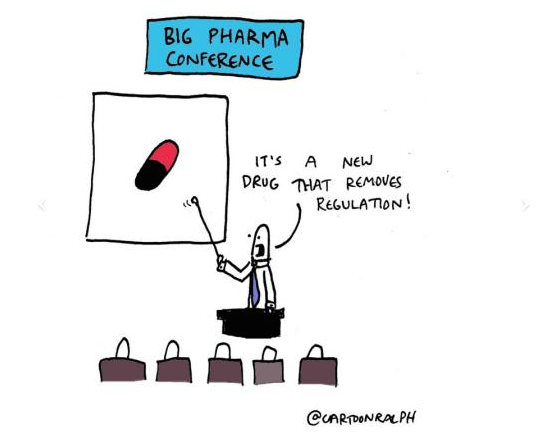 Big Pharma is everything but shy when it comes to lobbying EU policy-makers. The European Federation of Pharmaceutical Industries and Associations (EFPIA), for example, along with its US counterpart PhRMA (Pharmaceutical Research and Manufacturers of America) takes a particular interest in the Transatlantic Trade and Investment Partnership (TTIP), a trade deal being negotiated between the US and the EU. In 2015, the two of them spent a total of more than €5.5 million on lobbying in the EU, to represent the interests of an illustrious circle of multinationals, including Pfizer, Bayer, Novartis, and Roche.

But what exactly are these groups lobbying for in TTIP ? For a start, they intend to meddle in the regulatory process in order to influence which laws are passed or even presented to elected members of parliaments. This is why Big Pharma is pushing for a ‘Regulatory cooperation’ provision enshrined in the treaty. This mechanism is intended to ‘harmonize’, ‘align’ or ‘mutualize’ existing and future regulation on both sides of the Atlantic. What might sound harmless actually poses a great risk to European and US standards on public health and consumer protection. Big Pharma will be part of the envisaged ‘Working group for the regulatory cooperation on medicinal products’, thus having extensive rights to influence regulatory projects, even before any formal legal proposals have been made to democratically elected representatives. And, given that the agreement aims at removing barriers to trade and increase trade volume between the parties, it is very doubtful that the outcome of this ‘regulatory cooperation’ will lead to higher standards and levels of protection, especially if they dare to affect Big Pharma’s expected profits. It seems far more likely that in the process of ‘harmonization’ the lowest common denominator standards will be agreed on.

Don’t make the mistake of thinking that these mandatory consultations will be restricted to minor issues – they will concern very sensitive areas like production standards for drugs and medicine (e.g. frequency of inspections), the rigorousness and reliability of clinical studies, or Intellectual property rights (IPR). In this last area Big Pharma is willing TTIP negotiators to implement a strong protection regime. In other words : longer monopoly periods, higher medicine prices and more ‘new’ medication with little therapeutic value. What sound like EFPIA and PhRMA’s dream come true could have devastating effects for public health systems and patients’ well-being.

But that is not the end of EFPIA’s and PhRMA’s wish list. Another big point on their TTIP agenda concerns clinical trial data. Clinical trials are crucial in the development of new and reliable treatments, but at the same time very time-consuming and they require a lot of resources – resources that the public domain often cannot provide for. Therefore, medical researchers for the most part have to rely on the pharmaceutical industry for funding. These companies are, of course, working for profit and can pressure researchers to bring on quick – and preferably positive – results, allowing for a swift market launch. This practice is highly problematic as biased or otherwise distorted reports on those data can cause severe harm to human health. Access to the data in order to be able to scrutinize it is therefore important. With TTIP, Big Pharma could be able to restrict public access to clinical trial data by arguing that it should be considered ‘commercially confidential information’. Ultimately, in conjunction with the ‘Investor protection dispute settlement’ (ISDS), this could enable companies to sue governments for granting public access to clinical trial data. ISDS is a mechanism in international investment treaty that grants foreign investors special privileges to sue governments for regulations influencing their existing or even future profits. While multinationals have made a fortune by using this provision, consumers and states can only dream about similar rights to sue investors or companies for harm done to the environment or human beings.

Those are just some of the reasons that EFPIA and PhRMA have been nominated for the Democracy for Sale awards. These awards ‘honour’ the most successful lobby groups that have been involved in the backdoor concoction of TTIP, both in Washington and in Brussels. Because the agreement serves first and foremost the interests of big business and multinationals and – given that it would be binding under international law – it will irrevocably cement liberalization of trade and profit maximization at the expense of the public interest, democratic decision-making, and a just and sustainable economy.

The Democracy for Sale awards are organized by : Corporate Europe Observatory (CEO), Friends of the Earth Europe (FoEE), LobbyControl and WeMove.EU

For the full report on Big Pharma and more information on the other nominees, visit https://www.democracyforsale.eu/