Cabbage crisis cries out for FTA 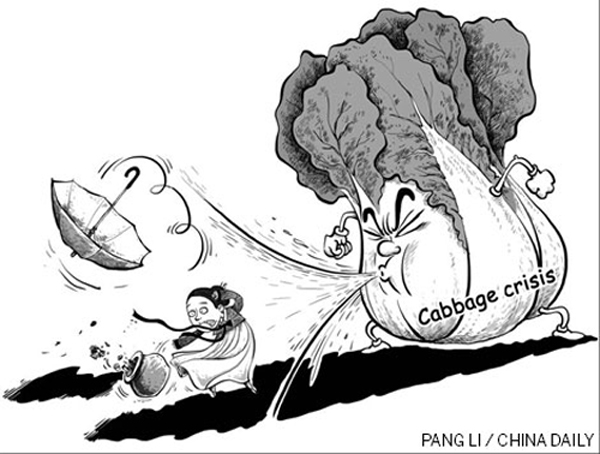 BEIJING, Oct. 28 (Xinhuanet) — The Republic of Korea (ROK) is facing a cabbage crisis, with the price of the vegetable reaching a historic high of more than 10,000 won (nearly $9) a piece.

To overcome the crisis, the ROK government lifted its tariff on cabbage imports temporarily on Oct 14 and decided to import the vegetable from China. Soon ROK businesspeople flooded the vegetable fields in Shandong and Liaoning provinces, and Tianjin municipality to buy cabbages.

The apparent reason for the cabbage crisis in the ROK is natural disasters. Cabbage production fell dramatically in the ROK because it was battered by typhoon and torrential rain.

But the real reason could be the trade protectionism measures that the ROK imposed on agricultural products for a year.

In today’s globalized world, no country or region can solve all its economic and agricultural problems on its own. That’s why economic globalization, regional integration and free trade areas (FTAs) have been thriving in the 21st century.

The agricultural acreage of the ROK is less than 1.85 million hectares, and falling. The trend among people in the ROK is to take up jobs or go in for business, especially small-scale business. This, combined with the country’s aging population, has caused the agriculture population to fall. So, the ROK has to rely on imports for a large amount of agricultural products.

But to get the support (and votes) of farmers, the ROK imposed high import tariffs on agricultural products to limit their import. The import tariffs on cabbage and white turnip were 27 and 30 percent, which made it difficult for imported products, even from neighboring countries, to enter its market. And that is the root of the "cabbage crisis".

If the ROK had agreed to set up an FTA with China, the two sides could have facilitated trade by reducing tariffs and eliminating non-tariff barriers, and ensured that the ROK didn’t face a cabbage crisis.

In November 2004, the leaders of China and the ROK reached an agreement to start studies on the possibility of setting up an FTA. After five years of studies and discussions, experts on the two sides agreed that an FTA would spur GDP growth in both countries.

China enjoys certain advantages in agriculture, fishing and clothing, while the ROK is strong in steel, auto and other manufacturing areas. It’s a pity that the two countries still haven’t been able to agree on an FTA. Two reasons could have influenced the ROK’s decision not to set up an FTA with China.

First, the ROK thinks Chinese products could influence its domestic market, a fear that is unwarranted. China is an agricultural country with a population of 1.3 billion and a massive market, and a majority of Chinese still live in rural areas.

Since the country’s per capita arable land share is low, its agricultural products are consumed mainly by its own consumers and hence are not so competitive in the international market. Last year, China’s agricultural exports accounted for only 5 percent of the total to the ROK, among which many were from China-ROK joint ventures.

Besides, China is wary of exporting its agricultural products. People have not forgotten the consequences of exporting garlic to the ROK a few years ago. And with China’s economic development and the improvement in living standards, Chinese consumers are demanding more high-quality and green products, making it possible to import them from other countries, including the ROK. An example is the rice imported from Japan and Thailand.

The ROK’s other concern is related to the US. The US administration is apparently against a China-ROK free trade area because it thinks it would help China to take move ahead in its efforts to integrate East Asia.

There are three relationships that call for setting up a China-ROK free trade area. The first is the mutual benefit such an agreement will bring. The second is that a China-ROK free trade area is not aimed at undermining US interests. And the third is that it will strengthen the relationship between small- and medium-sized enterprises (SMEs) and farmers, the disadvantaged groups today.

We can create a mutually beneficial situation only if we take care of the needs and interests of the SMEs and farmers.

China has been trying to build a stable, harmonious, prosperous and sustainable East Asia. Countries that blame others of trying to usurp the leadership role may be the ones that want to be the leaders themselves.

It’s natural for East Asia and even the whole of Asia would try to determine its own developing path, instead of being led or managed by other counties, and the ROK should realize that.

The author is a research scholar with the Chinese Academy of International Trade and Economic Cooperation, affiliated to the Ministry of Commerce.