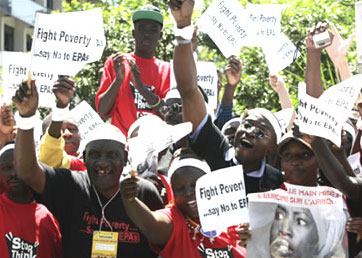 Despite protests from the Economic and Monetary Community of Central Africa (CEMAC), Cameroon agreed to an Economic Partnership Agreement (EPA) with Europe at the start of August, allegedly in violation of CEMAC rules.

The EPA is intended to succeed the Cotonou Agreement under which African countries were able to export goods to the EU duty free. Negotiations over the details of the new deal – under which several preferential features for African countries will no longer stand – have been ongoing since 2003, with the Central African states bargaining as a regional bloc.

These talks have continually faced deadlocks, however, and the deadline to agree and ratify the new deal was pushed back from October 2014 to August 2016. As this second deadline approached – after which preferential treatment to European markets would be suspended – most regional leaders were still unhappy with the proposals and agreed to hold out for a better deal.

Cameroon was warned against taking unilateral action, with CEMAC officials saying it would be in breach of the community’s rules and would threaten its membership of the bloc.

“[CEMAC] recommends that the Cameroonian authorities delay the [tariff] dismantling process billed for August 4 until the conclusion of a regional agreement,” Pierre Moussa, President of the CEMAC Commission, wrote in a letter to Cameroon’s Economy Minister.

But at the start of August, Cameroon disregarded this advice and signed into law its existing draft EPA. Amongst other things, this agreement means that its exports will still have duty- and quota-free access to European markets, but it also means that the country will have to gradually reduce its tariffs on EU imports over the coming years.

A threat to the union?

While Cameroon has now approved its EPA, negotiations with the other countries in the region are still deadlocked. However, Françoise Collet, head of the EU Delegation in Cameroon, told African Arguments that she hopes the deal with Cameroon will now build up to a regional agreement with Central Africa.

Collet also claimed that regional heads of state in July agreed that Cameroon would engage separately with the EU. Nonetheless, many commentators claim Cameroon betrayed and undermined the union as well as violating CEMAC rules.

Ngnitedem says that by signing the EPA unilaterally, Cameroon has broken the ‘common external tariff’ rule under which tariffs on goods entering a customs union are the same regardless of which specific country the goods are entering. He also suggests other countries in the region may now be tempted to do the same by entering alternative agreements with other partners such as China.

Many politicians in Cameroon, however, are dismissive of these concerns.

“At a given moment, we have to focus on our interest first. We have a strategic interest in the EPA,” says Emmanuel Mbanmi, an MP with the ruling Cameroon People’s Democratic Movement (CPDM) party. “Britain voted to pull out of the EU and Cameroon as a sovereign state also has the right to exit CEMAC if being in the union becomes a burden.”

The MP for Ngoketunjia South also brushes off claims his government has undermined CEMAC, saying that there are many regulations Cameroon respected while others in the union ignored them.

Joshua Osih, Vice President of the Social Democratic Front (SDF), Cameroon’s leading opposition party, concurs with this view. He says that other CEMAC countries have continuously disobeyed directives such as the free movement of citizens holding a biometric CEMAC passport which, he says, “today is a big joke”.

According to the EU, the EPA is meant to boost trade, enhance regional integration and contribute to the development of its African partners. But its negotiations with different regional blocs across the continent have consistently come across intractable disagreements.

Many experts argue that the trade deal – which requires African countries to reciprocally lower tariffs on imports over time – will constrain domestic policy options and undermine local production and industrialisation.

They say that dismantling tariffs on imports will not only lead to a reduction in customs revenue – which, for Cameroon, amounts to an estimated 600 billion CFA francs ($1 billion) per year – in the short-term. But it will also mean that burgeoning African businesses will always struggle to contend with much more competitively-manufactured products from Europe. They suggest that Africa will be caught in a position where it can only export raw goods to Europe and import cheaper finished products from elsewhere.

“[The EPA] will kill budding local industries,” says Ngnitedem. “African countries are under pressure from Europe which has an economic growth rate of 1% and lacks a market for its products.”

Bernard Njonga, President of the Cameroon Association for the Defence of Collective Interests, echoes these concerns. He also adds that the EU’s counterclaims that access to the EU Development Fund will in fact boost local companies to enable them to compete with Europe are “mere wishes”. “Do you believe they will raise our economy to the level that it would challenge theirs?” he asks.

It is these kinds of widespread concerns that have stalled the EU’s negotiations with the rest of the Central African bloc as well as other regions across the continent. But while Mbamni of the CPDM party concedes that Cameroon could become a dumping ground for some EU products, he insists that the country can benefit overall through smart policy choices.

“Tax reforms, land reforms, forest reforms and more are underway,” he says. “Tax would cover losses in customs duties since we can double production and exportation capacity. We must open our economy with specific provisions to protect nationals.”

SDF’s Osih agrees that the EPA can be seen as an opportunity as well as a danger, but is much less optimistic about the country’s prospects.

“We don’t have the right government and political leadership to make use of the huge opportunity,” he says. “The next thing is for us to get rid of our actual government and [President] Paul Biya to make the EPA profitable for each and every Cameroonian.”