The Globe and Mail | 9 February 2017 Canada, China to attend summit on free trade after TPP collapse

Canada and China are joining a mid-March summit hosted by Chile on how to advance trade in Asia-Pacific now that Donald Trump has pulled the United States out of the Trans-Pacific Partnership and ceded leadership in the region. 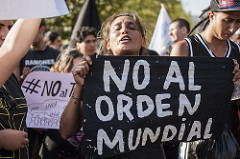 It’s the first effort to move beyond the rubble of the TPP deal – dead since Washington’s exit – and offers a possible way for Beijing to take the lead on influencing how trade should deepen between the West and Asia.

Chilean officials say they have invited all 12 countries that participated in the TPP talks as well as South Korea and China, which did not.

“The objective of this summit is to have an open-ended discussion about the different trade initiatives in the wider Asia-Pacific region … and to define the contributions of our countries to the architecture of the 21th century international trading system,” envoy Alejandro Marisio said.

The Trans-Pacific Partnership, which Mr. Trump has called a “rape of our country” cannot take effect because U.S. ratification was necessary for it to proceed.

The TPP deal had been promoted by the Obama administration as a counterweight to Chinese influence in Asia by enshrining North American-style rules for trade and intellectual property protection in the region. Former defence secretary Ash Carter had declared the TPP as valuable as “another aircraft carrier” in terms of U.S. influence in Asia.

In January, a senior Chinese diplomat, Zhang Jun, told journalists that Beijing will be forced to assume a world leadership role if others step back from that position. This statement came after Mr. Trump pledged to put “America first” in his inaugural address.

Australia’s trade minister says he will use the Chilean meeting to promote the idea of a “TPP minus one” deal that would build a pan-Pacific trade deal without the United States.

A spokesman for Mr. Champagne said this get-together should not be seen as an official post-TPP meeting because countries other than the 12 original negotiating nations are also attending. “Canada will be pro-actively signalling its willingness to pursue progressive trade in Asia and we very much look forward to those discussions,” Joseph Pickerill said. “Our focus now and indeed in Chile will be on making the pro-active case for progressive trade throughout Asia, north and south, in a way that works first and foremost for the middle class.”

It’s not yet clear whether the Trump administration will send an envoy to the Chilean meeting. The Trump White House has indicated a preference for one-on-one trade deals instead of group negotiations.

Canada’s incentive for taking part in the TPP negotiations was in part defensive and predicated on U.S. involvement. It wanted to ensure that its preferential access to the United States remained as strong as possible in a deal that promised to give 10 other countries similar or even better access.

The other significant attraction for Canada was to strike a deal that grants Canadian producers better access to Japan’s traditionally heavily protected market. The agreement reached in 2015 offered prized access to Japan for beef, pork, fish, canola, barley and a host of other products.

Japan would be a major player in any Pacific Rim trade talks but Tokyo has made it clear a trade deal with the United States is its first priority.

“In the post-TPP world, Japan sees its trade future as hinging on a bilateral agreement with the United States. Whether that will impede a multilateral [Pacific] deal with other countries is a good question,” Mr. Herman said.