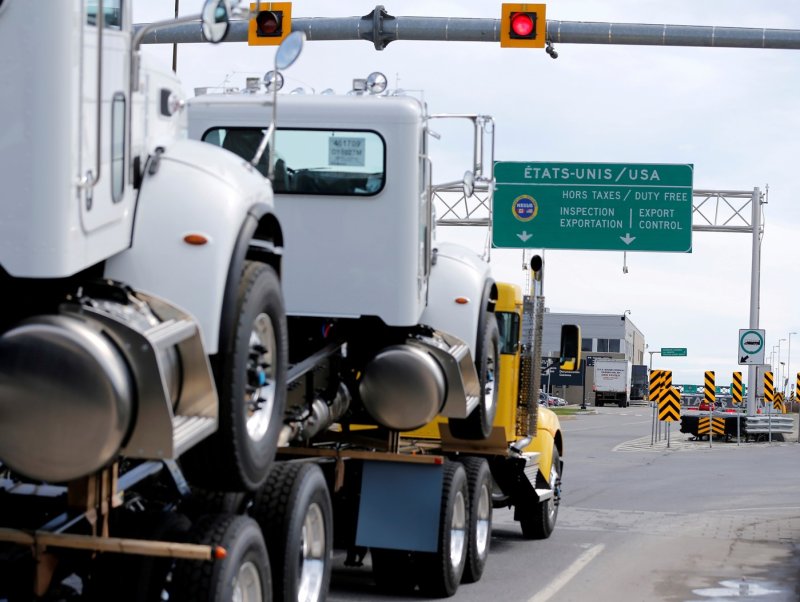 Canada notifies US and Mexico it has ratified revised NAFTA

Canada notified the United States and Mexico Thursday evening that it has finished its ratification process and is now ready to implement the measures in the revised North American trade agreement.

"This is an important step towards implementing this essential trade agreement," said Deputy Prime Minister Chrystia Freeland in a statement released Friday morning. "The Canadian government will continue to work with the United States and Mexican governments to determine an ’entry into force’ date that is mutually beneficial."

Freeland added she was hopeful that "with this step ... the new NAFTA will enter into force later this year."

News that Canada had given its notice was first reported by the American publication Inside U.S. Trade.

The Canada–U.S.–Mexico Agreement (CUSMA) will take effect on the first day of the third month after all three countries have given their notice of readiness to comply with its new measures.

The U.S. and Mexico have yet to send a similar notice of readiness to the other two partners. If they do so before the end of April, the deal could take effect on July 1.

The Trump administration had hoped to have the deal in place for June 1. Earlier this week, the lack of notice from any of the three countries meant that deadline was missed.

The coronavirus pandemic has prompted calls to delay implementation — perhaps until as late as this fall — as government and industrial resources are diverted to more urgent needs.

"We want to ensure the new NAFTA will support a strong economic recovery once we have put the COVID-19 pandemic behind us," Freeland’s statement said. ’Now is not the time’: Chamber of Commerce

"We welcome the next step in the ratification process to keep forward momentum of this important modernization of the original NAFTA," said Mark Agnew, the director of international policy for the Canadian Chamber of Commerce.

"However, Canadian businesses have repeatedly said that given the substantial disruption caused by COVID-19, now is not the time for CUSMA to enter into force. Companies are managing their existing supply chains and cash flow problems," he added, noting the original NAFTA is still functioning and companies need time to bring their systems into compliance.

"The government needs to explore delaying entry into force or grace periods for certain provisions."

But some companies in the automotive supply chain on both sides of the border are preoccupied at the moment — urgently retooling to help manufacture necessary medical supplies.

Canada’s dairy sector has asked for the coming into force date to be delayed until after August 1, so the agreement’s global export restrictions on products like skim milk and baby formula don’t begin to phase in until the start of the dairy industry’s next fiscal year.

Delaying one more month could be worth tens of millions of dollars for the dairy sector, the industry has told the federal government.

"We had asked the government to put some consideration into the timing of their ratification, especially given the concerns expressed by the auto and dairy sectors," said Conservative trade critic Randy Hoback. "They were very clear that they would need some time to adapt before the implementation of the agreement."

Hoback added that he hopes the government took the time to review the recommendations it received from the Official Opposition when the Commons trade committee reviewed C-4, the government’s implementation legislation, last month. He noted that mitigation measures (such as more compensation for farmers) should be put in place for businesses that may suffer under the new deal.

In notifying now, Canada has surrendered control over the timing of the deal’s implementation to the other two partners.

On the other hand, the Trump administration can no longer accuse Canada of dragging its feet.

On Monday, a bipartisan group of U.S. senators cautioned against proceeding before Mexico has proven it’s ready to comply with the agreement’s more demanding labour provisions. ’First step is to resolve it’

In a statement Friday, 3M warned the U.S. administration that other countries may retaliate in return.

Freeland told reporters she spoke to United States Trade Representative Robert Lighthizer on Thursday evening and reminded him that Canadian medical workers travel across the Windsor–Detroit border daily to do lifesaving work.

"As to the hypothetical of what would happen if it doesn’t get resolved — the first step is to resolve it," Freeland said. "I do want to assure Canadians that our government, as has been demonstrated by our actions, is prepared to do whatever it takes to defend the national interest. We showed that during the NAFTA negotiations."

Amendments signed last December fixed weaknesses in the original NAFTA that effectively prevented the three partners from being able to resolve disputes over whether a country is fulfilling its NAFTA commitments.

The improvements to the process for litigating complaints will not take effect until the deal is in force.