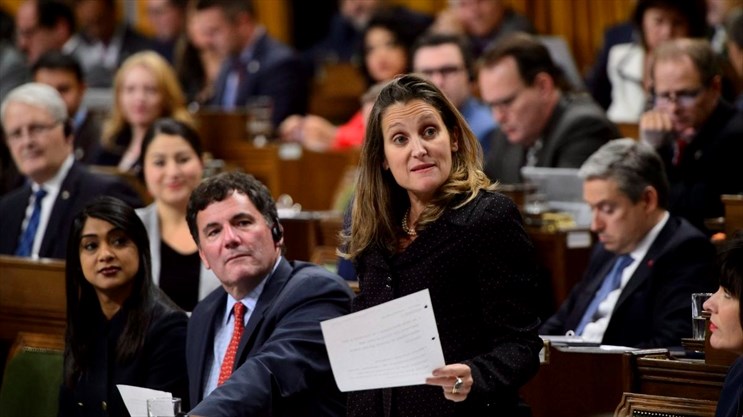 (Reuters) - Canada took a first step toward ratifying the new North American trade agreement on Monday, just three days ahead of U.S. Vice President Mike Pence’s trip to Ottawa to discuss the passage of the treaty.

Foreign Minister Chrystia Freeland presented what is known as a “ways and means motion” to the House of Commons, which opens the way for the formal presentation of a bill.

The United States struck deals on May 17 to lift tariffs on steel and aluminum imports from Canada and Mexico, removing a major obstacle to legislative approval of the new U.S.-Mexico-Canada Agreement (USMCA), the trilateral trade deal to replace the 25-year-old North American Free Trade Agreement.

Pence is going to meet Canadian Prime Minister Justin Trudeau in Ottawa on May 30 to discuss “advancing” ratification.

“The entry into force of this agreement does not depend solely on Canada,” Freeland told reporters after presenting the motion. “Insofar as possible, we intend to move in tandem with the United States.”

The United States is Canada’s top trading partner, taking in 75 percent of its goods exports. Reaching a new trade deal had been a priority for Trudeau’s Liberal government, and now a national election is just five months away.

Some U.S. Democrats have come out against ratifying the trade agreement. While Freeland has said the government is “full steam ahead” on ratification, she would not say on Monday whether the government would push to get it done before parliament goes into recess ahead of the vote.

John Manley, a former Liberal foreign minister, said on Friday that Canada should pass the new treaty this summer.

“To fail to pass it is going to be a signal to the U.S. Congress that it is still open for renegotiations,” Manley told Reuters.