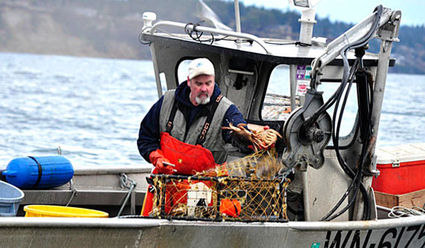 This week, Cooke Aquaculture, a Canadian fish farm corporation, explicitly threatened to use the North American Free Trade Agreement (NAFTA) to sue the U.S. government in a private tribunal if lawmakers in Washington state enact a proposed ban on the farming of Atlantic salmon, an invasive species, in the state’s waters.

The proposed policy follows the escape of over 200,000 Atlantic salmon from the company’s fish farms in the Puget Sound last August — the latest in a series of such accidents, sparking outcry from Indigenous groups, environmentalists, and fishing communities that depend on the Puget Sound ecosystem. Washington’s proposed ban on Atlantic salmon farming would apply to all companies, domestic and foreign. Cooke Aquaculture has threatened to sue the U.S. for $76 million, plus lost anticipated profits, if the ban is enacted, using NAFTA’s controversial investor-state dispute settlement (ISDS) system. The company’s press release bluntly states: “If the Legislature approves a ban on our operations, Cooke will seek to recover our confiscated investment, plus costs and lost profits, through mandatory arbitration against the State of Washington under Chapter 11 of the North American Free Trade Agreement.”

Earlier this week, reports indicated that Canada may propose the elimination of ISDS in ongoing talks between Canada, Mexico, and the U.S. to renegotiate NAFTA. The provision, as it is currently written, allows corporations to sue countries for any anticipated financial losses as a result of rules and laws passed to protect communities and the environment.

"Once again, a corporation is using NAFTA to openly threaten lawmakers because the well-being of a community and its ecosystem is being put first. The corporate protections at the heart of NAFTA — including ISDS — must go. Communities should have the power to protect their air, water, and livelihoods without fear of being sued in undemocratic tribunals by multinational corporations.

“We hope Canada heeds the tireless calls of communities across North America to completely remove ISDS and other corporate handouts from NAFTA. This would be an important step, but only the first step. To produce a deal that benefits our communities, NAFTA’s protections for corporations must be replaced with binding protections for workers and the environment.”