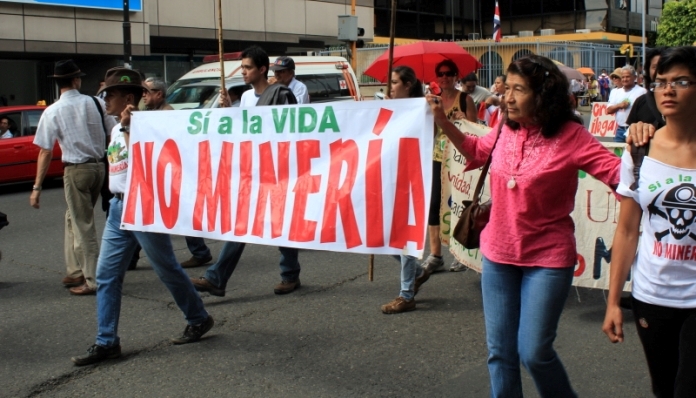 The news last July that Canadian mining firm Infinito Gold was closing shop caused some to speculate that the company’s multimillion dollar case against Costa Rica before the World Bank’s arbitration court might be mute. Not so. Infinito announced last week that it has secured funding from a lender to continue pursuing damages stemming from Costa Rica’s cancellation of the firm’s gold mining concession in 2011.

Infinito is seeking approximately $300 million in damages and lost profits, including interest, plus attorney fees and other expenses related to the arbitration.

The sought-out amount also includes several million dollars it was ordered to pay last year by a Costa Rican court for restoration and reforestation of the mining site, located in northern Alajuela province near the border with Nicaragua.

Erich Rauguth, who in September was appointed interim president and chief executive officer of Infinito after the previous board resigned, said the company’s sole purpose, for now, is to seek reparations for losses related to the never-realized Crucitas mine in Costa Rica. He said the firm has no assets.

“[The company] produced a mine that could have been in production, and right now the obligation to shareholders is to make sure they get some return on investment,” he told The Tico Times in a telephone interview from Canada. Rauguth co-founded Infinito Gold, formerly Vannessa Ventures, and was a large stakeholder and a director of the company until 2006, according to an arbitration court filing. He was also president of the Costa Rican subsidiary of the company, Industrias Infinito.

In March 2014, after Infinito definitively lost a legal battle in Costa Rica courts that lasted more than a decade, the company filed a request for arbitration before the World Bank’s International Centre for Settlement of Investment Disputes (ICSID). But just six months after the newly-formed arbitration tribunal held its first telephone conference in the case, Infinito announced that it was folding — or at least that’s what it sounded like.

“Infinito Gold Ltd. (the “Company”) announces that all of the directors of the Company and all of the officers of the Company have resigned from their respective positions with the Company effective immediately,” a July 15, 2015 news release read. The company disclosed that it was more than $160 million dollars in debt and that because of this and the fact that the firm’s principal shareholder and creditor — billionaire Canadian investor Ron Mannix — “was unwilling to advance any further funds to the Company, the Company has concluded that it will not be possible for it to continue operations.”

Nine days later, Costa Rica requested that the case before the World Bank’s ICSID be dropped.

Apparently, other Infinito shareholders weren’t willing to give up the battle. In September, Infinito announced that a new board of directors had been approved by a British Colombia court. The board includes two shareholders and Rauguth, who was appointed to reorganize the company and get the arbitration claim back on track.

The newly-reorganized company advised the World Bank court that it wished to continue the proceedings and filed its complaint, called a Memorial on the Merits, on December 23, its deadline to do so.

Then, on January 15, the company announced that it had secured new funding to continue with its case against Costa Rica. Under the agreement, the funder, whose identity was not disclosed, would get a portion of any final settlement awarded by the arbitration court to Infinito. Infinito also announced that its secured creditors had agreed not to demand payment of the company’s debt pending the outcome of the ICSID case “or certain other events.”

At the heart of Infinito’s claim before the ICSID is the allegation that, despite continuous controversy over the mine, the Costa Rican government made numerous assurances — across several administrations — that the project could go forward. The company argues that these assurances culminated in the 2010 decision from the Constitutional Chamber of the Supreme Court, or Sala IV, that the project was environmentally sound and could move forward.

The following year, a parallel branch of the Supreme Court, the Administrative Chamber, annulled all of the project’s permits based on a 2002 moratorium on open-pit mining. The company claims that this decision ignored several previous legal decisions by Costa Rica’s high court upholding Infinito’s rights to proceed with the project.

Infinito says it spent approximately $81 million developing the Crucitas gold mine between 1993 and 2013.

In its claim, Infinito blames much of its legal woes in Costa Rica on anti-mining activists and politicians, suggesting that they unduly influenced court and government decisions. (The Costa Rican conservation community saw the end of Crucitas as a major victory for the environment and the country’s green image.)

In its Memorial on the Merits, the company, which is represented in the arbitration case by Canadian legal firm Torys, argues that Costa Rica violated four of its obligations under the Costa Rica-Canada Promotion and Protection of Investments treaty. The company claims that Costa Rica:

The claim asks that Costa Rica be found liable for damages arising from these alleged violations “based on the fair market value of the Crucitas project as of the date of the breaches, or the date of the award, whichever is higher, assuming that the breaches had never occurred.”

A consulting firm hired by Infinito estimated the damages at $321 million.

In its claim, the company says the trading price of its shares “began to free fall” right after the 2011 announcement from the Administrative Chamber of Costa Rica’s Supreme Court annulling Infinito’s mining concession. The price of Infinito shares reached zero in March 2013, according to the complaint, and has remained near zero ever since. (See a historical chart of Infinito’s trading price here.)

Infinito claims that at least 620 individual investors lost their money because of Costa Rica’s alleged investment treaty violations, many of it held in retirement savings plans. Rauguth estimated the actual number of individual investors at near 1,000 (he said it used to be closer to 2,000).

The company’s current relationship with Ron Mannix, who has been identified in earlier company documents and numerous news reports as the company’s biggest shareholder and financial backer through his companies Coril Holdings and Exploram Enterprises, is unclear.

Coril Holdings does, however, appear to still own the biggest chunk of Infinito shares. The Tico Times contacted Coril Holdings but was told the firm had no comment on the matter.

Nicolás Boeglin, a University of Costa Rica international law professor, said arbitration disputes before the ICSID usually take at least four years to resolve. He said it generally costs around $8 million for a country to defend itself in such cases — before potential damages.

Costa Rica’s Foreign Trade Ministry, COMEX, which is representing the country before the World Bank investment tribunal, said it couldn’t comment on the renewed litigation but said it would file its counter Memorial on the Merits by the end of March.