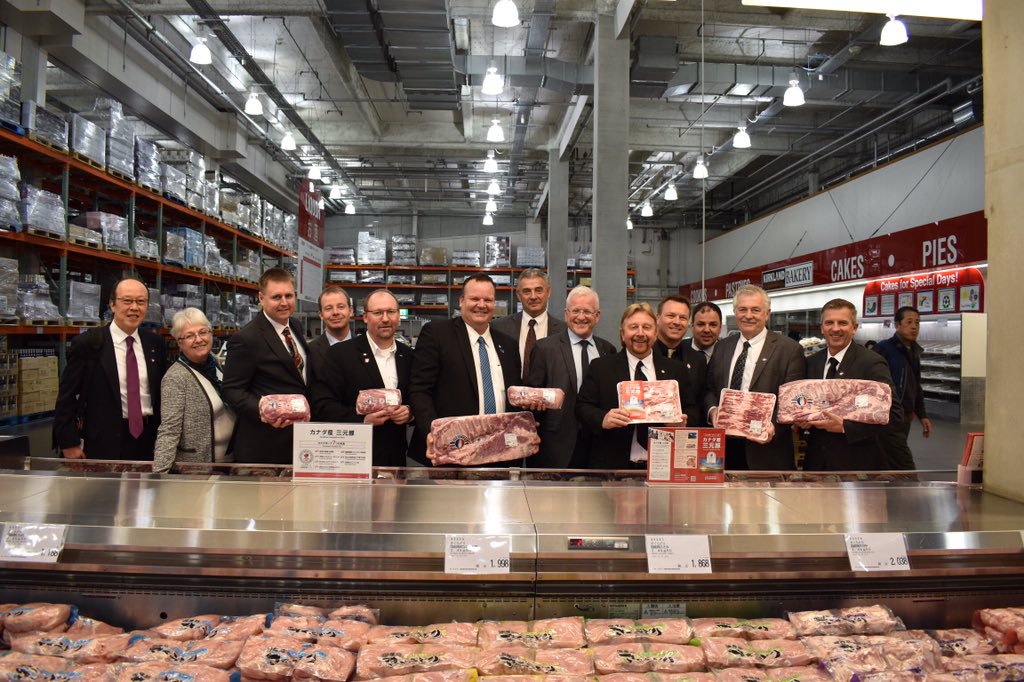 Canadian pork exports to Japan are closing in on those of the United States as homegrown producers race to take advantage of a new Asia-Pacific trade deal abandoned by the U.S. in 2017.

Canadian shipments of chilled pork meat to Japan hit 14,403 tonnes in February, the second month the Comprehensive and Progressive Agreement for Trans-Pacific Partnership (CPTPP) was in effect, according to Japanese customs clearance data. The figure marks a 122 per cent increase compared to the same month a year ago and places Canada just behind the U.S. total of 14,599 tonnes.

“The U.S. pulling out of the CPTPP is certainly one of the reasons we have had this chance to get ahead,” said Martin Lavoie, chief executive of Canada Pork International. “This has been a major opportunity and I think you will see the numbers jumping even more shortly.”

One of U.S. President Donald Trump’s first moves following his inauguration in 2017 was to withdraw from the Trans-Pacific Partnership — the signature trade policy of former president Barack Obama. Representing about 40 per cent of the world economy, supporters of the now-defunct TPP had hoped it would create a bloc to counter China’s economic might in the region.

Instead, the remaining 11 countries entered into the revised CPTPP, prompting economists to warn that the preferential tariff treatment the bloc enjoyed would threaten the market share of American producers.

“It certainly has hurt the U.S. in the short term, I think that’s fairly evident,” said Ted Bilyea, special adviser to the Canadian Agri-Food Policy Institute. “Whether that will be a medium- or long-term problem for them is the question right now.”

Rising Canadian beef exports have taken an early spotlight, tripling to 3,545 tonnes in January 2019, according to Japanese import data, as tariffs fell to an initial 27.5 per cent from the standard rate of 38.5 per cent.

Canadian pork exports have been making gains too, though the tariff advantage is less dramatic. Japanese levies on pork fell by half to an initial 2.25 per cent, but they will gradually be phased out altogether.

Though the expansion in access for pork producers may be more modest, Canadian exporters have been aggressively exploiting it to gain a bigger foothold in the lucrative Japanese market, the largest for Canada by value and the third largest by volume.

“It’s important for Canada because Japan is a unique market that can afford to pay for quality,” Bilyea said. “There’s a fair bit of value still to be had in these tariffs.”

Industry leaders have cautioned that the CPPTP is still in its early days and trade fluctuations due to seasonality and other market factors can occur. Indeed, Japanese imports of Canadian beef slipped to 2,455 tonnes in February, suggesting “importers held back product until the CPTPP came into force in January to get the lower tariffs,” according to the Canadian Cattleman’s Association.

Nevertheless, Canadian Prime Minister Justin Trudeau and Japanese Prime Minister Shinzo Abe touted the benefits of the deal last week, with Trudeau noting that Canadian beef exporters had enjoyed a surge in shipments to Japan, “while the Americans do not have that kind of access.” The deal, he said, stood in “stark contrast” to rising protectionism in the U.S.

Just how long Canada’s edge lasts will depend on upcoming trade talks between the U.S. and Japan. Facing pressure from farmers, Trump has threatened to impose a 25-per-cent tariff on Japanese automobiles if the country doesn’t open its market to more U.S. beef and other agricultural products.

A swift Japan-U.S. deal would dampen Canada’s advantage in commodities exports and could also deter Canadian companies from taking advantage of the opportunities to export value-added products under the deal, Bilyea said.

“The issue is I don’t know how much companies would be willing to gear up and invest in producing those things for Japan if the U.S. gets a deal that gives them as much access,” he said. “We’re primarily commodity exporters, but if the U.S. doesn’t enter the agreement shortly, you’ll see a fair number of companies gear up to make products for Japan because it’s a tremendous opportunity.”