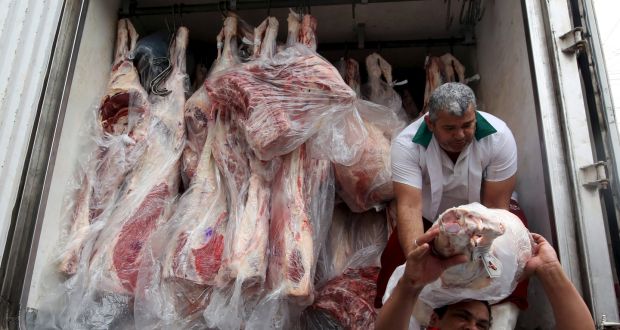 While France is challenging the meat quotas provided for in the EU-Mercosur trade agreement, it plans to ratify the EU-Canada free trade agreement (CETA), which has been criticised by French beef producers. EURACTIV France reports.

French beef producers are standing up against the free trade agreements negotiated by the European Commission, fearing unfair competition from countries such as Argentina, Brazil and Canada.

Against the tide, the French government, along with Ireland, Poland and Belgium, has expressed concern about this trade agreement and its impact on their agricultural sectors, which would be more vulnerable to competition from Argentine and Brazilian producers.

“The cumulative effect of the various quotas negotiated within the various free trade agreements signed by the European Union could ultimately destabilise production and the agricultural sector,” indicated the four heads of state and government.

Among the concerns raised in the letter are beef, poultry, sugar, ethanol quotas, the quality of agricultural products exported to Europe, particularly meat, as well as border controls.

Meat is one of the more important concerns, as Brazil and Argentina are major producers.

“We do not want beef to be part of the negotiation package with Mercosur,” said a spokesman for France’s interprofessional association for livestock and meat (Interbev).

“In French law, we are asked to improve the way we produce beef, and consumers want us to be environmentally friendly and mindful of animal welfare, etc… On the other hand, we cannot open the doors to imports that do not meet any of these quality criteria,” he continued.

Concerns about quality gaps in production between EU and Mercosur countries have increased since the election of Brazil’s far-right President Jair Bolsonaroa. He has already allowed the registration of 152 previously banned pesticides, many of which have been banned in the European Union.

In addition to the extensive use of chemical inputs, meat production conditions are far from European standards. “Hormone-treated beef is excluded from the quotas but everything else is there, including GM foods from crops grown from deforestation, antibiotics used as growth promoters, etc. “said the Interbev spokesperson.

Today, livestock farming is responsible for 80% of the deforestation in the Brazilian Amazon, which is home to 40% of the world’s remaining rainforests.

“In Brazil, the environmental, sanitary and phytosanitary standards imposed on production models are lower than those applied in Europe,” according to an open letter signed by Europe’s main agricultural union, Copa-Cogeca.

Pekka Pesonen, Copa-Cogeca’s secretary-general, said “European farmers can […] handle the implementation of ambitious measures to adapt to climate change […] However, this will only be possible if the EU does not undermine the sector’s efforts by tolerating imports of products from countries that encourage deforestation and support agricultural practices that are not accepted within the EU”.

Aurore Lalucq, a French economist and MEP from the Socialists and Democrats (S&D) group, said there was already “much to worry about the consequences of this agreement in terms of the environment, climate protection, health, workers’ rights and European agriculture. The election of Mr Bolsonaro as head of Brazil has further aggravated these fears.”

In parallel with the Mercosur agreement, to which Paris is opposed, along with a few allies, France has announced its ratification of the CETA, the free trade agreement between the EU and Canada. The ratification text is expected to be presented to MPs in the French National Assembly on 17 July.

The CETA came into force in September 2017 but France has not yet ratified it due to concerns about Canadian beef being able to compete on the French market.

During a visit by Canadian Prime Minister Justin Trudeau on 7 June, French President Emmanuel Macron confirmed that the feared surge of Canadian beef on the French market had not taken place.

“After almost two years of provisional implementation, the CETA’s results are positive. Economic destabilisation, which had been feared among some French agricultural sectors, had not taken place, notably with regard to beef exports,” Macron said during the visit.

Farmers had already set themselves up against the CETA, which would open the door to unfair competition against Canadian meat, where the use of hormones for cattle fattening is allowed.

However, the government’s desire to ratify the CETA is definitively misunderstood by the industry.

“It is true that there has been no visible impact on the French market but Canadians are preparing to get stronger, especially when it comes to high-quality beef cuts like sirloin,” the Interbev spokesperson explained.

The meat is sold at €13-14 per kilo in France, compared to about €7 in Canada and such a price difference could seriously damage European and French livestock farming.

“Beef production in Canada is certainly not as bad as in Mercosur countries but the same methods are allowed, including the use of animal bonemeal, growth promoters antibiotics, etc,” said the Interbev spokesperson.