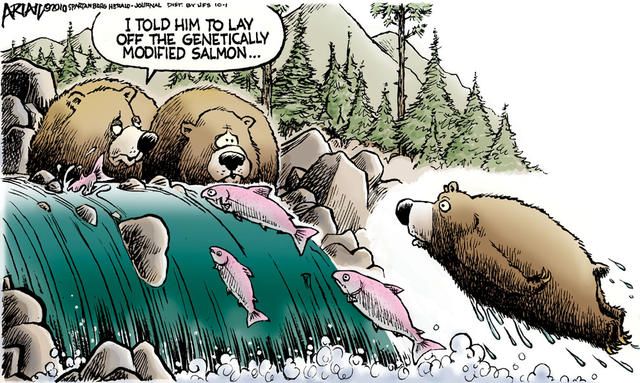 The Canada-European Union Comprehensive Economic and Trade Agreement (CETA) could mean that genetically modified salmon will be sold as food to Europeans.

CBC reported yesterday that, "At a news conference in Ottawa on [May 19], Health Canada and the Canadian Food Inspection Agency announced AquaBounty’s genetically modified salmon has been approved for sale as food in Canada."

AquAdvantage, produced by Massachusetts-based AquaBounty, is an Atlantic salmon that contains a growth hormone from a Chinook salmon and a gene from an ocean pout. The result is a fish that is large enough to eat in about a year and a half, rather than the typical three years. As such, the salmon are genetically modified to grow at twice the rate of regular salmon.

The CBC highlights, "Health Canada will not require AquAdvantage Salmon sold on Canadian grocery store shelves to be labelled as a genetically modified product." iPolitics adds, "The salmon has been approved for both livestock and human consumption. It is the first genetically modified animal to be approved for use in Canada. The approval extends to filets for human consumption and feeds like fish meal and fish oil."

Global Affairs has boasted, "When CETA comes into force, almost 96 percent of EU tariffs lines for fish and seafood products will be duty-free. Seven years later, 100 percent of these tariff lines will be duty-free, making these world-class products more competitive and creating the conditions for increased sales."

Tariff rates on salmon, which now range up to 15 per cent, will be eliminated under CETA, meaning more Canadian salmon will be sold in Europe.

In March 2015, the CFIA also gave permission to a British Columbia-based company to grow and sell a genetically modified apple in Canada. The apple has been genetically modified so that it does not brown when cut or bruised. This is notable because under CETA more Canadian apples will be heading to Europe. Under the deal, the 9 per cent EU seasonal tariff on Canadian apples will be reduced to 0 per cent.

There is also the concern that the United States-European Union Transatlantic Trade and Investment Partnership (TTIP) could mean that slaughtered chickens dipped in a bleaching solution (to kill germs and bacteria) could be exported by the US to Europe. While chicken is excluded from CETA, Health Canada regulations allow both chicken and beef to be washed and processed with chlorinated water. If ratified, CETA would give Canada duty-free access to Europe for processed beef, pork and bison products.

Notably, CETA establishes a mechanism in which Canada and the European Union can "discuss and attempt to prevent or resolve" non-tariff barriers relating to agricultural exports, while TTIP could include a Sanitary and Phytosanitary committee to review whether food safety measures are the "least trade restrictive" and "equivalent".

Both these "regulatory cooperation" processes would be a means for corporate interests to push against food standards that reject genetically modified and chlorinated foods.

CETA and TTIP are a threat to food safety.