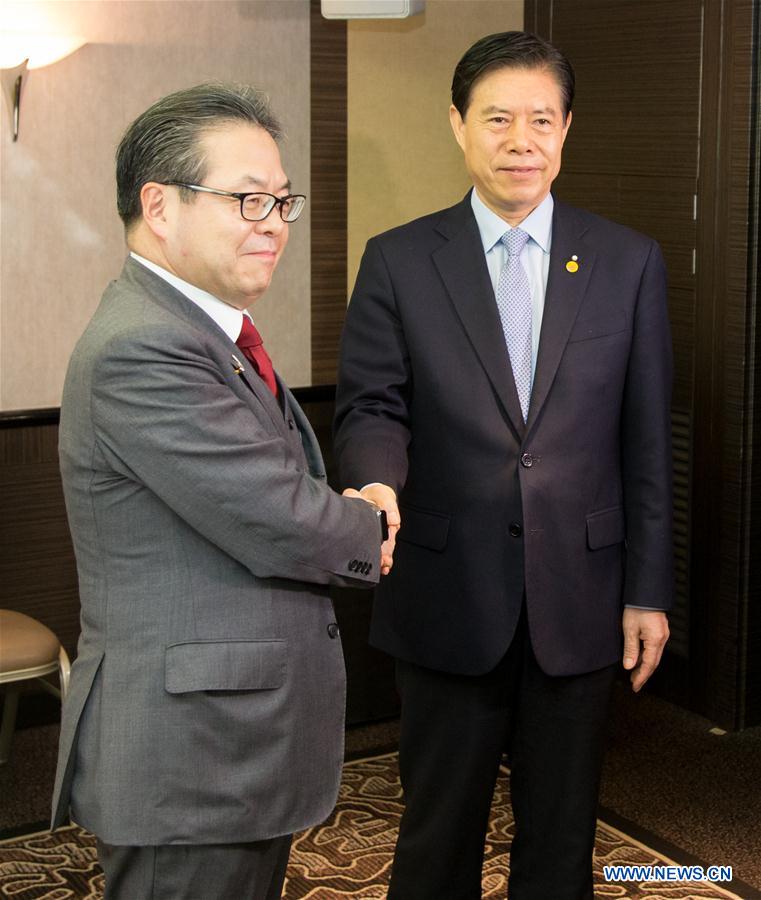 Tokyo: Trade ministers of China and Japan pledged to further enhance bilateral economic and trade cooperation during their meeting here on Wednesday.

Chinese Minister of Commerce Zhong Shan, who is accompanying Chinese Premier Li Keqiang here for the first visit of a Chinese premier to Japan in eight years, said Li’s visit is significant for bilateral relationship, and will guide and promote Sino-Japanese economic and trade relationship to make new development in the new era.

He said that as the second and third largest economies in the world respectively, China and Japan have close and highly complementary economic ties, and steady development of bilateral relations is in the interests of both sides and is beneficial for regional stability and world prosperity.

As this year marks the 40th anniversary of the signing of the China-Japan Treaty of Peace and Friendship, he urged the two sides to take the opportunity and implement consensus of leaders of the two countries to promote bilateral economic and trade cooperation to a new level with higher quality.

First, the two sides should actively implement the important consensus reached between their leaders and promote extensive and deep cooperation in areas such as trade and investment and service trade.

Second, the two sides should jointly promote trilateral cooperation among China, Japan and South Korea and economic integration of East Asia. China is willing to make joint efforts with Japan to reach at an early date an all-round and mutually beneficial China-Japan-South Korea Free Trade Agreement (FTA) with high level and promote talks on the Regional Comprehensive Economic Partnership (RCEP). China is also willing to make the next trilateral trade ministers’ meeting a success as host of the meeting.

Third, the two sides should jointly safeguard and support multilateral trade system and promote economic globalization to develop towards a more open, inclusive, balanced and win-win direction that is beneficial to all. China again invites and welcomes Japan to actively take part in the first China International Import Expo (CIIE).

Japanese Minister of Economy, Trade and Industry Hiroshige Seko, for his part, said that Japan is willing to make joint efforts with China to promote bilateral economic and trade cooperation to develop in depth, especially in service areas and third-party market cooperation.

He said that China and Japan have broad consensus on achieving the China-Japan-South Korea FTA and the RCEP talks, and Japan is willing to work with China to reach these agreements at an early date.

Japan is also wiling to safeguard and support multilateral trade system together with China and to actively participate in the CIIE, he said.

The two sides also signed on Wednesday a series of memorandum on service trade and third-party market cooperation among others.