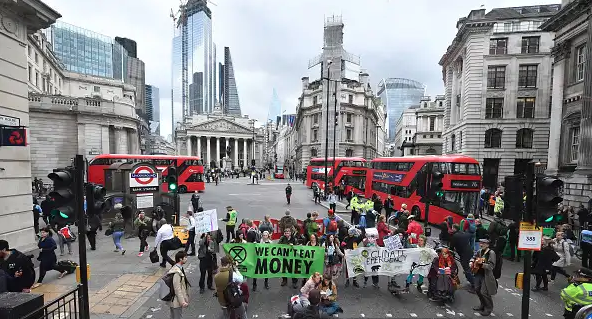 Representatives from the City of London are to travel to the US in a bid to boost transatlantic ties for the finance sector post-Brexit.

The pair are seeking to promote London’s financial services sector and explore opportunities to collaborate in areas such as fintech and green finance as they sit down with Citi, JP Morgan, Blackrock and other financial businesses.

The joint visit will also include a focus on venture capital spending, following a reportedly record amount of fintech investment in London so far in 2019.

According to data from London & Partners and Innovate Finance the first eight months of the year saw more than two billion dollars (£1.6 billion) invested in London-based businesses across 114 deals.

Mr Estlin and Ms McGuinness’s visit comes against a backdrop of a possible post-Brexit trade deal between the UK and US.

“ I want to see us build on the regulatory highway between our two countries, based on continued faith in open and free global financial markets” Catherine McGuinness, City of London Corporation

The City of London Corporation, the body providing services to London’s Square Mile, said that the capital’s financial sector wants any trade arrangement to prioritise deepening regulatory and supervisory relationships.

Ms McGuinness is also due to travel to Washington for meetings with the US Treasury, Federal Reserve and US Trade Representative where she will argue for a “regulatory highway” for UK and US services.

She said: “The UK and US have many common interests in the regulation of the financial services sector in years to come.

“I want to see us build on the regulatory highway between our two countries, based on continued faith in open and free global financial markets.

“As we consider the shape of the UK’s future trading relationship with the USA, we should keep all options on the table to ensure that business has the best opportunity to do what it does best – creating jobs and prosperity on both sides of the Atlantic.”

Mr Trump said at the time: “We can quadruple our trade with the UK and I think we can really do a big job.”

Ahead of the meeting, Mr Johnson had said he would tell the president that the NHS cannot be on the table for a post-Brexit trade deal.

In August, Mr Trump’s former chief economic adviser Gary Cohn suggested the UK could have a trade deal with the US “overnight” if the UK agrees to a “free, open border” between the two countries.

But his comments were followed by Larry Summers, former US treasury secretary, saying that Britain had “no leverage” in any trade negotiations and should not hope to be prioritised in a trade deal with the US.

Meanwhile Nancy Pelosi, a Democrat and the speaker of the US House of Representatives, has warned there is “no chance” of a US-UK trade deal succeeding if Brexit jeopardises the Good Friday Agreement.