Clashes lead to chaos in Ecuador 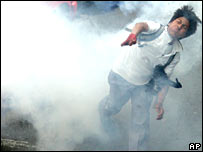 Students and police have clashed again in Ecuador, as protests against a possible rise in bus fares entered a second week.

Protesters vandalised property in the capital, Quito, and attacked police with sticks, stones and homemade bombs.

About 100 students have been detained, and the government has criticised the police for using excessive force. 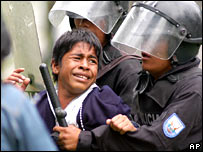 Dozens of people have been hurt and correspondents describe the situation in central Quito as chaotic.

Classes have been suspended until Monday in a number of schools, local media report.

The protests started last week, after a minister appeared to suggest bus fares could rise - a possibility he later rejected.

The students also want the government to cancel its contract with the Occidental Petroleum Corporation and for it to refuse to join the proposed Free Trade Agreement of the Americas.

Trades unions and indigenous groups have warned they may join the protests.

In recent years, Ecuador has been blighted by social unrest. Street protests in April 2005 led to the ousting of President Lucio Gutierrez.

The country is due to hold elections in October, to replace interim President Alfredo Palacio.