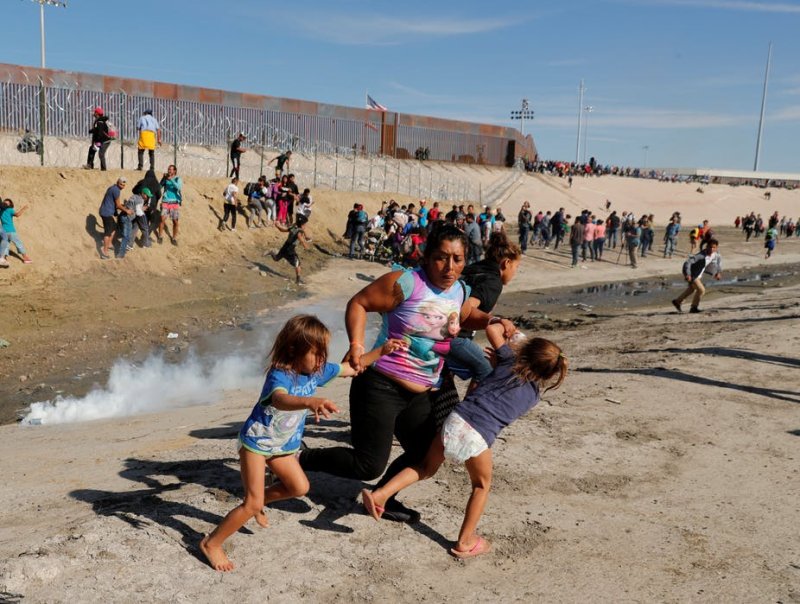 On the last day of April, 16-year-old Juan de León Gutiérrez died in U.S. government custody in Texas. It was just 10 days since he had crossed the border after migrating from his home in Guatemala. His passing follows the deaths of 8-year old Felipe Gómez Alonzo and 7-year-old Jakelin Caal Maquin in December while in Border Patrol custody—they were also from Guatemala.

The Trump administration’s vicious crackdown on people migrating from Mexico and Central America, including unaccompanied children and children separated from their families, is allegedly designed to deter those considering the already dangerous journey north. But the focus on deterrence ignores the intersection of two powerful forces that have destabilized the economies and lives of many in Central America and are driving migration: Climate change and the Central American Free Trade Agreement (CAFTA).

Guatemala and Honduras recently surpassed Mexico as the home countries of most people crossing the U.S. southern border. The percentage of families or children traveling alone is much higher than in the past. And, they are not trying to avoid capture, but rather are seeking asylum from dangerous conditions and deep poverty in their home country, according to the Washington Office of Latin America.

According to news reports, Gutiérrez was from Camotán, one of the poorest and driest parts of Guatemala that lies within a region known as the “Dry Corridor.” Farmers in the Dry Corridor—which includes parts of Guatemala, Honduras, Nicaragua and El Salvador—lost nearly half their corn and bean crop in 2018 after a multi-year drought dating back to 2015 was followed by torrential rains, according to the United Nations. Time reported that the Gutiérrez family had completely lost their maize and beans in 2017 and 2018 due to the drought.

The UN Food and Agriculture Organization reports that, “Central America is one of the regions most vulnerable to disaster risks due to its geographical location, high climate variability, exposure to extreme hazards and the institutional and socio-economic weaknesses of its population.” The New Yorker recently wrote, “The south of Guatemala has suffered spectacularly in recent years, forcing the federal government, last December, to offer food stamps to families who lost more than half of their land to a prolonged drought in the towns along the Honduran border.” Researchers at the Guatemalan System of Climate Change Sciences found this month that subsistence farmers and indigenous populations in the country were the most vulnerable to climate-related damage to harvests. The PBS Newshour reported from Honduras last month on how the long-term drought was affecting corn and bean production, driving farmers in the Western state of Lempira off the land. A rust fungus that spreads rapidly in hot and dry conditions is also plaguing Honduran coffee farmers.

Researchers are increasingly making the explicit connection between climate-related weather extremes in the region and migration. A study by the UN World Food Program and other aid organizations found a correlation between the multi-year drought, the loss of crops, increased food insecurity and an increase in migration from El Salvador, Guatemala and Honduras toward the U.S.

Climate-related disruptions to the region’s agriculture fall on top of the powerful economic effects from CAFTA, which passed the U.S. Congress in 2005 by a single vote. Like NAFTA, CAFTA supporters claimed the free trade deal would slow migration to the U.S. But a 2017 AFL-CIO report on trade and migration found that since passage of CAFTA, immigration from Central America to the U.S. has steadily risen, particularly from Honduras, Guatemala and El Salvador.

Like NAFTA, CAFTA’s passage led to a flood of U.S. agricultural exports into Central America. According to the USDA, since implementation, U.S. farm and food exports to the CAFTA‐DR countries (including the Dominican Republic) have doubled, reaching $4.3 billion in 2016. Exports to Guatemala, Honduras and El Salvador have seen the fastest growth, doubling from $1.1 billion in 2006 to $2.2 billion in 2016. During this period, research published by IATP found that U.S.-based agribusiness firms routinely export corn, soybeans, wheat and rice to global markets at prices below the cost of production—a practice known as dumping. Many of these firms, like Cargill and Archer Daniels Midland, are global and have extensive operations in the CAFTA countries. Similar to the loss of more than two million Mexican farmers following NAFTA, this deluge of often below-cost agricultural exports from the U.S. made it difficult for many Central American farmers to survive. A 2015 AFL-CIO fact-finding report on the widespread loss of farmers in Honduras found, “Under CAFTA, large agricultural interests have shifted production to compete in the global market and have displaced many subsistence farmers and campesinos … including Afrodescendent Garifuna workers, who described how they were pushed from land where they grew beans or corn, while corporate plantations are expanding oil palm cultivation.”

The treatment of workers under CAFTA, including within the palm oil industry, has come under heavy scrutiny. The U.S. Trade Representative under President George W. Bush touted CAFTA’s labor provisions as “world class, best ever.” But violence against labor leaders in the region has continued—and enforcement of CAFTA’s labor rules is non-existent. A 2014 GAO report found, “persistent challenges to labor rights, such as limited enforcement capacity, the use of subcontracting to avoid direct employment, and, in Colombia and Guatemala, violence against union leaders.” Even in cases of clear violence against union leaders in Guatemala and sugar cane workers in the Dominican Republic there was no enforcement action taken under CAFTA. A U.S. government investigation into Honduras’ failure to enforce labor laws agreed to under CAFTA took three years. Despite finding a failure to effectively enforce these labor laws, no action followed. In Honduras, there continue to be reports from the agricultural union federation FESTAGRO (Federación de Sindicatos de Trabajadores de la Agroindustria) of sugar cane worker abuse including wage violations, blocking labor inspections and anti-union intimidation.

CAFTA’s intellectual property rights provisions have also faced criticism. Public health advocates have condemned the rules maintaining high prices for pharmaceutical drugs even when cheaper generic versions are available in other countries. In 2014, farmers and Indigenous leaders in Guatemala successfully organized mass protests to repeal the so-called “Monsanto law.” Written to comply with CAFTA’s IP rules, the law would have facilitated Monsanto’s (now Bayer) entrance into the seed market, threatening penalties for farmers in the region of Solola—home to the country’s indigenous corn varieties.

The Trump administration’s New NAFTA repeats the same harmful policies as the original and CAFTA—agreements that continue to drive forced migration. The New NAFTA ignores climate change and, with favors for polluting industries, will likely further increase greenhouse gas emissions. The New NAFTA also does nothing to address the damage of agricultural dumping, retains most controversial investor-state provisions for companies operating in Mexico and actually further strengthens the hand of multinationals like Monsanto/Bayer with far-reaching intellectual property rules.

The drivers behind forced migration from Central America to the U.S. are multi-faceted and complex, including extreme violence. But any effective response must include strategies to address the deepening impacts of climate change on the region’s economy and the continuing damage of CAFTA. There is no sign that the Trump administration’s inhumane and ineffective immigration strategy, which routinely and blatantly violates human rights, will respond to these powerful forces—ensuring not only failure, but more tragic losses of life like Juan, Felipe and Jakelin’s.