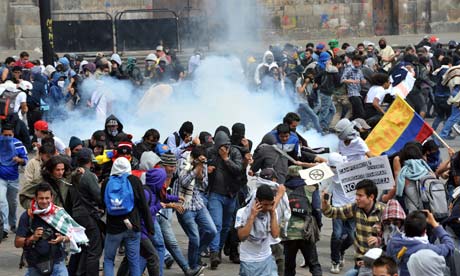 Colombia is latest addition to pantheon of free-trade follies

The failure of free-trade agreements has repeatedly highlighted the need for more humane, intelligent agricultural interventions

As Colombia takes a breather after weeks of strikes and disruption that triggered violence on the streets of Bogotá in late August, one can only reflect on how predictable it all was.

The same storyline has been played out in countless countries. A failure by successive governments to invest in things that small-scale farmers need to thrive – better roads to get their produce to markets, subsidies to reduce the soaring cost of inputs – is then compounded by a decision to open up the countryside to international competition.

In this case, that involved a major free-trade agreement with the US that came into force last year. Colombia’s farmers – who were barely eking out a living in the first place – are being undercut, making it even harder from them to make ends meet.

Years ago, I spoke to farmers in Catatumbo, where the latest round of national unrest began. Their potatoes and onions were selling for a pittance, and they were desperately trying to avoid the temptation to grow coca, which – though often the only option if people want to put food on the table, send their kids to school, or make improvements to their homes – brings the threat of violence. Rather than support these farmers, the Colombian government works with the US government to "fumigate" swaths of land in the hope of occasionally drizzling coca crops with chemicals. Talk about attacking the symptom not the cause.

Attempting to stave off the latest free-trade folly, national and international NGOs and academics supported farmers’ efforts to air their fears about the future. Evidence from around the world was mustered to show how they would be affected by further liberalisation.

Gone are the days when mega-plantations are considered the only sensible way to run rural areas. The Brazilian model, for example, once synonymous with large-scale agriculture, is now a balanced one, in which small-scale farmers are supported by the state, improving their lives and building the Brazilian economy to boot.

The recent strikes in Colombia were remarkable for the backing farmers received from all sides of the social and political spectrum. Even supporters of the free-trade agreements accept farmers have been hit badly.

Why, then, are these same failed policies being rolled out again? There seem to be three reasons.

First, the decision-makers at the heart of government were trained in an era when neoliberal economics really was ascendant. However much evidence emerges demonstrating that market fundamentalism has failed development efforts, it is one’s formative years that often remain paramount in policy choices. The country’s decision-makers really do believe that, despite the pain for some, Colombia will benefit from competing in the global market, in part because they expect prices to fall for the consumer. There is no sign of that so far. The legacy of neoliberalism lives on.

Second, until they take to the streets and start burning cars, those who lose out due to these policies are generally out of sight and out of mind for most of Colombia’s law-makers. The winners are often closer to home, businesspeople to whom benefits will accrue from a more liberalised domestic marketplace and better access to markets abroad. Colombia is extremely unequal, and policymakers tend to support policies that will favour their own income bracket. (One ex-agriculture minister – tipped as a successor to his mentor, the former president Álvaro Uribe – is on trial for his alleged part in diverting farming subsidies to friends and allies rather than poor farmers.)

Third, Colombia, though a relatively well-off country, still bows to pressure from international partners such as the US and EU. In contrast to Colombia’s eagerness to get as many trade agreements signed as possible, I remember the Bolivian ambassador saying he had nothing against free trade, as long as it was also fair; shortly afterwards, his country walked out of trade negotiations with the EU.

It is hard to survive from the land in almost all countries, which is why so many (including, of course, the US) massively subsidise their farming communities. While spouting absurd "free trade" rhetoric about level playing fields, they flood other countries with subsidised produce, putting hardworking families out of business.

And even if it were a genuine level playing field, who said efficiency is the only thing that matters in life? The mega-subsidisers of the north have long given up on that old lie, recognising the role of the farming community in maintaining rural areas and ways of life.

We have been talking about this for decades, with Haiti being one of the most tragic recent examples of an economy destroyed by dogma, coincidentally benefitting US exports.

How many more countries will have to live through misery and conflict before the wrong-headed belief in the invisible hand of the markets is replaced by humane and intelligent agricultural interventions?