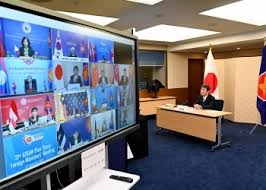 Japan, China, South Korea and the Association of Southeast Asian Nations (ASEAN) held a "ASEAN+3" Foreign Ministers’ Meeting on the 9th in a video conference system. Foreign Minister Toshimitsu Mogi participated from Japan. We confirmed that we will continue to cooperate towards the signing of the East Asian Regional Comprehensive Economic Partnership (RCEP) within the year.

We also talked about support for measures against the new coronavirus. Mr. Mogi said that he would contribute $ 1 million to the "ASEAN Response Fund" as a unique contribution of Japan. It was agreed that Prime Minister Shinzo Abe would accelerate the coordination toward the establishment of the "ASEAN Infectious Disease Control Center" advocated in April.

Mr. Mogi emphasized the need to strengthen cooperation with ASEAN toward the realization of Japan’s "free and open Indo-Pacific" concept.