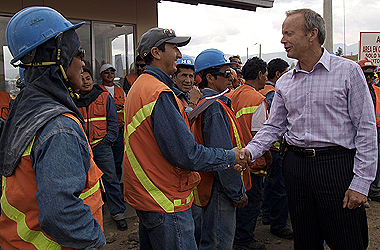 Corporacion Quiport S.A., the company building the new Quito international airport, has initiated arbitration proceedings at ICSID against the Republic of Ecuador in connection with its concession to maintain and operate the existing Quito airport and to construct and operate the New Quito International Airport (NQIA) being built outside Ecuador’s capital.

Two weeks after the arbitration was registered by ICSID on December 30, 2009 it was suspended by agreement of the parties. Citing sources at the Attorney General’s Office, Quito daily El Comercio reported that on January 13, 2010 the parties suspended the arbitration so that they could continue talks related to the airport concession contract.

Under the concession contract Quiport was supposed to pay loans to international lenders, recoup its investment and make a profit through the fees it was given the authority to charge to airport users both at the old Quito Airport, which it also manages, and at the NQIA during the life of the concession .

Yet the Constitutional Court ruled that the fees charged to airport users were actually taxes which could not be handled by a private company under the new Constitution law. The decision of the court is understood not to be appealable.

Following the decision, the sides were forced to enter renegotiations of the concession contract. The Municipality of Quito, which was set to receive US $1.5 million per year as a concession fee, has taken the opportunity to seek a larger share of the profits from the new airport. The international lenders include OPIC, Ex-Im, IDB and EDC.

Mayor Augusto Barrera, who was not in office when the concession contract was signed, has said the concession fee does not serve the city’s interests and is instead seeking new terms under which the city would receive a percentage of the airport’s profits. Quiport is opposed to changing the contractual model, though it has been open to a new economic arrangement which may now be necessary in order to abide by the Constitutional Court’s ruling.

ITN contacted Steve Nackan, President of Aecon Concessions, one of the investors in the project, and Jonathan Hamilton of White & Case LLP which represents the claimants and was told the company had no comment due to the ongoing negotiations. ITN also contacted officials at the Ecuadorian Attorney General’s who also had no comment.

Philippe Baril, president of Quiport, told El Comercio that the international lenders funding the project had imposed a negotiation deadline of January 29, 2010. According to Mr. Baril the project is proceeding but at a diminished pace due to a lack of funds being made available by the project’s lenders.

Though the current dispute at ICSID was filed under an investment contract, some investors in Quiport are protected by Bilateral Investment Treaties. The American and Canadian BITs with Ecuador contain arbitration clauses which allow for investor-state arbitration under the Arbitration Rules of the United Nations Commission on International Trade Law (UNCITRAL), not just ICSID.

This is significant because Ecuador denounced the ICSID Convention on July 6, 2009 and in accordance with Article 71 of the ICSID Convention, the denunciation took effect on January 7, 2010, six months after ICSID’s receipt of Ecuador’s notice. (Read about the possible effects of Ecuador’s withdrawal from ICSID: http://www.investmenttreatynews.org/cms/news/archive/2009/08/28/ecuador-prepares-for-life-after-icsid-while-debate-continues-over-effect-of-its-exit-from-the-centre.aspx)

Quiport won the concession for the NQIA and the management of the existing Quito airport through the Canadian Commercial Corporation (a Canadian Government Crown Corporation), which made a proposal to the city in 2001 setting out the structure of the project.

Since then, according to public reports, the company claims it has invested US$ 74 million of its equity investment as well as US$ 376 million in international financing for the US$650 million project.