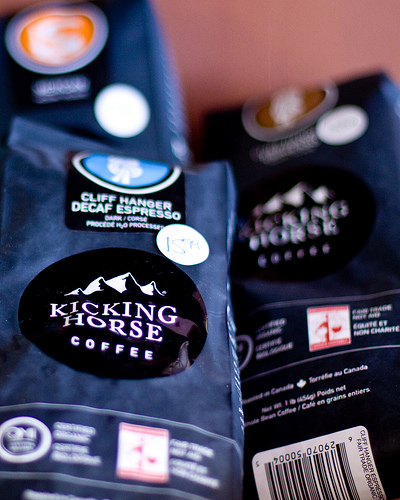 Over the past few weeks the Occupy Wall Street (OWS) movement has shone the spotlight on corporate power and social inequality, and calls have begun to emerge from within the movement around an array of demands, from a windfall tax on the richest 1 per cent, to Adbuster’s “Robin Hood” tax on global financial transactions, to advancing alternative economic models through support of such things as cooperatives, credit unions, and fair trade.

Slipping quietly beneath the Occupy headlines in activist circles have been reports that TransFair USA has formally split with Fairtrade International (FLO), widely regarded as the most rigorous and legitimate fair trade labelling body in the world. While on the surface this might appear strictly as a split between two different organizations, in reality it represents something much deeper: the further penetration of the world’s true ‘occupying’ force, the corporate sector, which seeks not only to dominate economics and politics, but to occupy all of our social and psychological space, right down to our desire for ethics and justice.

TransFair USA has long butted heads with FLO and other fair trade groups over the standards and direction of fair trade and in particular its relationship to corporations. While FLO has adopted a more cautious and gradual approach to the mainstreaming of fair trade and the expansion of corporate involvement, TransFair USA has dove in head first, enthusiastically currying favour with giant corporations and insisting that fair traders accept changes in their standards to meet the demands of new corporate partners. With this split, TransFair USA has renamed itself “Fair Trade USA” and seeks to move beyond the U.S. market and become a global certification body, essentially converting itself into a corporate-friendly alternative to traditional fair trade certification.

Fair Trade Then and Now

In its history and evolution, the fair trade network is far from the typical top-down ‘corporate social responsibility’ programs that have emerged in rapid numbers in recent years as corporations have sought to divert criticism from global justice activists. Since its inception in the 1940s and 1950s, fair trade consumerism has been driven by the efforts of North-South solidarity groups and small farmer organizations in the South. These groups have heavily criticized the corporate-driven global trading system and sought to pressure both corporations and governments for a better deal for small farmers and rural workers.

Central to fair trade activism have been fair trade ‘buycotting’ campaigns. In buycotting campaigns, fair trader activists organize a variety of protest, information, and letter-writing campaigns to pressure corporations to offer some quantity of fair trade coffee to consumers in their stores. Unlike conventional boycotts, fair trade buycotts offer corporations the prospect of increasing profitability by tapping into ‘ethical consumer’ demand. They also make relatively incremental demands. The result is that the largest corporate supporter of fair trade in North America, Starbucks, only buys 7.9 per cent of its coffee beans as certified fair trade.

Due to the incremental demands of buycotting, fair trade campaigns have been relatively successful and more and more giant corporations have signed on to fair trade each year (including Wal-Mart, McDonalds, Dunkin’ Donuts, and Nestle), leading to a significant sales boom for the fair trade network. This victory, however, comes with a paradox as corporations and their spin-doctors increasingly use fair trade certification as part of their multi-million dollar public relations campaigns to mask their broader agenda to the ‘free trade’ policies that fair traders and their global justice allies have long fought against.

The nature of fair trade’s market driven approach has also given corporations increasing influence over the direction of fair trade itself. It is this growing power that lies behind the split between Fair Trade USA and FLO. While FLO has resisted corporate influence over its standards, Fair Trade USA has embraced it, openly declaring its enthusiastic support for ‘free trade’ and the innovation of the corporate sector.

The biggest issue of contention has been the role of giant coffee plantations in fair trade. Currently, only coffee cooperatives composed of small farmers are certified by FLO. Corporations like Starbucks have long pushed for this rule to be eliminated so that they can expand their fair trade certification while working with their traditional coffee suppliers, giant landowners in the South.

FLO has resisted these demands for years, insisting that there are millions of small scale coffee farmers who desperately need the support of fair trade standards. Organized into cooperatives, these small farmers represent an alternative and more socially just model to corporate coffee plantations that already have significant economic and political advantages over small farmers in the global market.

While workers on these coffee plantations certainly need better labour standards, FLO has chosen to support the alternative model of small farmer cooperatives. To do otherwise would be to succumb to the logic that we should all buy goods from companies with the worst labour records as those are the ones that employ the workers most desperately in need of jobs and low pay.

In breaking with FLO, Fair Trade USA has declared its keen readiness to certify coffee plantations, as well as take the necessary steps to rapidly expand fair trade certification and sales, while providing “farmers with tools, training and resources to thrive as international businesspeople.” Starbucks is no doubt ecstatic over the move as it will now be able to expand its certification without making major changes to its business practices. In fact, the door is now wide open for any number of changes to ‘fair trade’ certification as corporate partners line up to propose suggestions to Fair Trade USA, willing to do what it takes to get more corporations on board.

There are many other forces within fair trade that seek to push the network in other directions, both within the U.S. and internationally. In Canada, for example, some of the lead fair trade partners are worker-owned cooperatives (Planet Bean, JustUs! Coffee, and La Siembra) who have pushed for a vision of fair trade centered on economic democracy in both the North and the South. These organizations have expressed some frustration over the sense that their licensing fees to Fairtrade Canada have in part been used to fund efforts to get corporations, like Starbucks Canada, to buy more fair trade products. At the same time, the strength of these cooperatives, along with progressive fair trade promoters like Equiterre in Quebec, have resulted in a different ideological terrain for fair trade in Canada compared to the United States, and Fairtrade Canada has remained committed to FLO and its more hesitant posture toward the growing corporate influence.

The Future of Fair Trade

No doubt the conversion of Fair Trade USA into a more corporate-friendly alternative to FLO will result in significant sales increases for ‘fair trade’ products as corporations move in to further occupy the fair trade network. Its impact on genuine fair trade, however, is likely to be the opposite, eroding the already modest fair trade standards while putting downward pressure on other, legitimate fair trade certifiers who need to compete to stay in the business.

It would seem that, in the long term, only international agreement on labour and environmental standards, a non market-driven approach divorced from corporate control, can achieve the social and ecological goals that fair traders aspire for. Against corporate efforts to occupy fair trade, we must turn toward the vision of a radical extension of economic democracy such as that promoted by Canadian fair trade cooperatives and animating much of the discussion within the Occupy movement over the last few weeks. •

Gavin Fridell is an Associate Professor and Chair of Political Studies at Trent University in Peterborough, Ontario, and the author of Fair Trade Coffee: The Prospects and Pitfalls of Market-Driven Social Justice (University of Toronto Press: 2007).