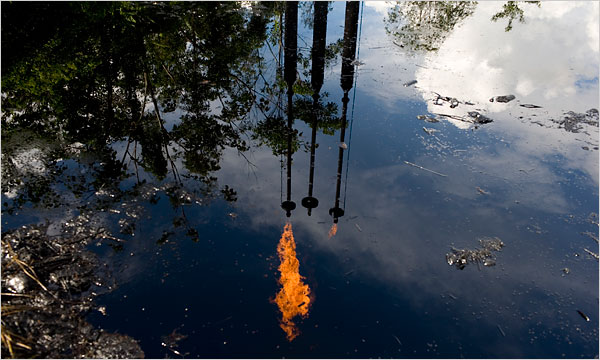 Ecuadorean President Rafael Correa said “corruption” was to blame for Sunday’s ruling from the District Court of the Hague in favor of U.S. oil giant Chevron, which effectively exonerated the company from any responsibility for remediating the contamination in the Amazon.

In 2013, the Ecuadorean Supreme Court affirmed an earlier ruling that found Chevron responsible for environmental contamination in the Ecuadorean Amazon and set the compensation at US$9.5 billion.

Chevron responded by announcing that it would not abide by the Supreme Court and then set out on a campaign to delegitimize the ruling, turning to international arbitration bodies.

The tribunal ordered Ecuador to suspend enforcement of the US$9.5 Billion judgment and later chastised the state for attempting to enforce the judgment in other jurisdictions such as Canada and Brazil. Chevron has refused to pay and no longer has any assets in Ecuador, forcing the country to seek redress in other countries.

​Ecuador argued that the tribunal did not have the jurisdiction to hear the case and had violated the country’s sovereignty.

“This arbitral award is illegitimate and illegal as Chevron is using an investment treaty signed between Ecuador and the United States in 1995, three years after Chevron ended its operations and left Ecuador, they want to apply this treaty retroactively, which would go against all principles of law,” Santiago Escobar, Canadian Director of the Anti-Chevron Campaign, told teleSUR.

A panel from the District Court of the Hague rejected Ecuador’s arguments, stating that the country was bound to the terms of the bilateral investment treaty.

The panel also affirmed Chevron’s claim that they could not be held accountable for the contamination since the Ecuadorean government certified the remediation work carried out by the oil company.

President Correa has questioned the legitimacy of that decision by the government of then president Jamil Mahuad.

“All of this is the product of corruption: having signed in 1998 that Chevron had cleaned ’everything’,” said Correa Sunday via his official Facebook account.

Mahuad was a highly unpopular president who favored neoliberal economic policies and transnational companies. His policies eventually led to a near total collapse of the country’s economy and he was ousted in an uprising.

Climate Justice in the International Arena

At the COP21 Climate Change conference in Paris, President Correa called for the creation of an international climate justice court precisely to handle cases such as this one, which are otherwise handed by tribunals that derive their authority from investment treaties.

“The ruling by the U.S.-Ecuador Bilateral Investment Treaty tribunal is reprehensible but not surprising since this is a private tribunal, part of the World Bank, which as we know works in collusion with transnational companies and bankers, and defends their interests and not those of citizens,” said Escobar.

Correa’s proposal would provide a venue for lower-income countries such as Ecuador to seek redress for environmental crimes and oblige the payment of environmental debts.

Chevron responded positively the ruling by the District Court of the Hague.

"Today’s decision reinforces the integrity of the arbitral proceedings and ensures that Ecuador will be held accountable for violations of its international commitments," said the company in a statement released Friday.

"We look forward to the tribunal’s final award on the merits, which should hold Ecuador responsible for the multiple frauds committed against Chevron throughout the Lago Agrio case."

Chevron alleges that the US$9.5 billion ruling against the company was secured fraudulently.

The District Court of the Hague effectively agreed with the oil company, affirming the interim awards issued by the investment treaty tribunal when it opined that the "interim measures taken by the tribunal cannot be explained otherwise than by the fact that at the time those measures were taken, the tribunal apparently had serious indications that the judgment rendered at first instance in the Lago Agrio proceedings … came into being fraudulently.”

On the same basis, the court also rejected Ecuador’s claims that rulings by investment treaty tribunal violated the rights of Ecuadoreans to live in a pollution-free environment, something guaranteed by the Ecuadorean Constitution.

​In March 2014, U.S. Judge Lewis Kaplan determined that the compensation had been secured fraudulently. His ruling was largely predicated on the testimony of a man named Albero Guerra, who claimed that the presiding Ecuadorean judge had offered to write an agreement favorable to the plaintiffs in exchange for a bribe.

However, the reliability of Guerra’s testimony has come under question as he has admitted that he was motivated by personal financial interest. He also admitted under oath that he lied in order to better position himself in negotiations with Chevron.

Escobar warned that should Ecuador lose the final ruling by the investment tribunal, the price would ultimately be paid by the Ecuadorean people, as the state, in the face of international reprisals and without access to credit, would lose the ability to invest in social programs.