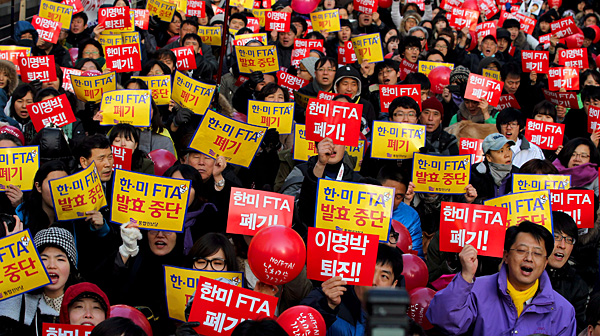 A court has ordered the release of all documents exchanged by South Korea and the US in the area of intellectual property rights when negotiating their free trade agreement (FTA).

It’s the first court ruling ordering the release not only of official negotiation materials but also documents exchanged in behind-the-scenes negotiations.

The 7th administrative division of Seoul Administrative Court ruled on Nov. 28 for the plaintiff in a suit filed by patent attorney Nam Hui-seop against the Minister of Trade, Industry and Energy demanding the reversal of an information disclosure refusal. Nam filed suit in July 2015 after the ministry refused an initial information disclosure request that March. Nam had demanded the release of “position materials from both government, lists of response policies and issues of contention, and other documents containing composition tables for package agreements on remaining issues, etc., from the South Korea-US FTA negotiations in the area of intellectual property rights.” The ministry has maintained that it cannot release the materials because doing so “could result in South Korea’s negotiation strategies being revealed and used as bargaining information in future negotiations with other countries.”

The court rejected most of the ministry’s arguments. To begin with, it concluded that the information in the case “was limited to legislation in the area of intellectual property rights, such that its disclosure cannot be seen as preventing a risk of substantially compromising major state interests.”

In particular, the court concluded that it was justified to disclose composition tables for package agreements. The tables divide issues up by order of priority, including areas that must be enforced and others that allow for some compromise and concession, to suggest ideas for reaching a comprehensive deal on remaining issues. The Trade Ministry has said that their release could result in “South Korea’s basic position and negotiation strategies being exposed.”

But the court concluded that the KORUS FTA “has already entered effect and its negotiation terms have been made public, so that what the South Korean government accepted can be reasoned [based on the text] without disclosure of the package agreement composition chart.”

Another court sided with the group MINBYUN-Lawyers for a Democratic Society last September in another suit against the Trade Minister demanding the reversal of a refusal to disclose information on the KORUS FTA. In its suit, MINBYUN demanded the disclosure of all documents exchanged during the 2007 KORUS FTA re-negotiation process up until the establishment of “provisions that could be seen as disadvantageous to South Korean investors.” The ministry similarly cited the possibility of harming national interests and generating diplomatic and trade frictions with the US as reasons for not making them public, but its argument was not accepted by the court.

“The scope of information on the KORUS FTA that courts are demanding the release of is broadening,” said attorney Song Gi-ho, head of MINBYUN‘s international trade committee. “They have put the brakes on backchannel negotiation procedures that disregard the public’s right to know for reasons of ‘possibly harming national interests.’”

source: The Hankyoreh
Korea US
Subscribe to bilaterals.org weekly