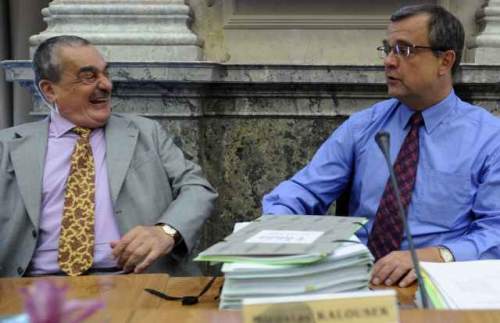 The Czech government in early January postponed plans to renegotiate or scrap a bilateral treaty with the US on the support and protection of investments. It transpires that diplomatic courtesy is behind the delay: Czech Foreign Minister Karel Schwarzenberg (TOP 09) did not want the issue to be the first item on the agenda for the new US ambassador Norman Eisen.

According to a government report made available to Czech Position, the Bilateral Investment Treaty between the US and Czech Republic is disadvantageous for the Czech state and recommends that failing the renegotiation of new terms, the treaty should be scrapped.For eight years now, the Czech Finance Ministry together with diplomats have unsuccessfully attempted to change the treaty’s conditions

The Czech-US investment treaty has been a thorn in the eye for Czech politicians practically since it was signed in 1991 because it is seen as favoring US investors. For eight years now, the Czech finance ministry, together with diplomats, has unsuccessfully attempted to change the treaty’s conditions.

“Overall the US’ approach to the renegotiation of the agreement can be described as ‘passive resistance.’ Typically the Czech Republic received answers to its proposals, reminders and assessments a year after they were passed to the US side and often only after a series of urgent reminders,” reads the government report submitted by Schwarzenberg and Finance Minister Finance Miroslav Kalousek (TOP 09).

“The US has delayed negotiations by repeatedly submitting demands for clarification of the Czech proposals, despite the fact that the American side was informed in detail about the content thereof,” it says.

The report presents three basic options on how to proceed on the issue. The first is to halt negotiations on changes to the treaty, the second – continue with negotiations, and the third – to withdraw from the treaty. Nevertheless, the report’s authors are skeptical about the prospects for negotiations producing any favorable results.

“Considering the course of renegotiations hitherto, it cannot be realistically expected that further negotiations would lead to any significant progress in the form of direct changes to the Czech-American investment treaty,” the authors say.

The Finance Ministry, which has been charged with renegotiating the terms of the investment protection treaty, objects to a whole range of its provisions.

“In particular, the Czech side has attempted to remove indirect investments (investments by a US investor through an entity in a third country) and requested the negotiation of an up-to-date mechanism for settling disputes between investors and the state of the hosting country which would strengthen the position of the state in arbitration cases and eliminate the risk of multiple arbitrations,” Radek Ležatka from the Finance Ministry’s press department told Czech Position.

On the level of a banana republic

‘From the point of view of the interests of the Czech Republic, it would be most advantageous to terminate the validity of the Treaty with the US without delay.’

Schwarzenberg is also convinced that the treaty dating from 1991 is disadvantageous for the Czech Republic and points out that the country’s economic situation has changed substantially since it was signed.

“We had a weak economy dependent on foreign investment. This does not apply to the situation today,” Schwarzenberg points out in the report. For example, the US negotiated 22 exemptions, compared to two on the Czech side.

The report also reveals that Czech politicians attempted to negotiate changes to the treaty within the framework of talks on the potential installation of the US anti-missile defense radar in the Czech Republic. “It was not possible even during those top-level talks to reverse the negative stance of the US toward changes to the investment treaty,” the report says.

“According to this treaty we’re on the level of a banana republic. Because of this treaty the Czech state has paid out billions of crowns following lost arbitration cases,” a diplomat familiar with the issue who asked not to be named told Czech position.

The diplomat cited the dispute between the former director of TV Nova Vladimír Železný and the US company CME as an example. The Czech state was obliged to pay out Kč 10 billion when Železný lost the arbitration.

US representatives have repeatedly claimed that Congress would not ratify the changes demanded by the Czech state, even if protection of US investments would only be downsized to the level of guarantees with traditionally strong trading partners such as Japan.

“Therefore it’s possible to state that there is no point in continuing attempts to renegotiate the treaty with the US because the US is not willing to change its position on the issue whatsoever,” the government report advises.

According to the report, if the Czech Republic withdraws from the treaty, the move would not have an impact upon the volume of US investment in the Czech Republic. The report’s authors say that the level of legal protection provided for by EU laws is a sufficient guarantee for foreign investors. The Czech Republic acceded to the EU in 2004.

Withdrawal from the treaty would not entail any sanctions: according to the treaty, following termination established investors at the time of termination would be entitled to protection under the terms of the treaty for a further 10 years.

“From the point of view of the interests of the Czech Republic, it would be most advantageous to terminate the validity of the Treaty with the US without delay because taking into account the persistent refusal of the US to renegotiate the treaty, there is no other means to resolve the disadvantages of the treaty. As long as the Treaty on the Protection of Investments remains valid, damages to Czech interests in the area of Czech-American protection of investments will continue,” the report concludes.

Czech Position’s sources said the government now plans to raise the issue with US representatives in May.