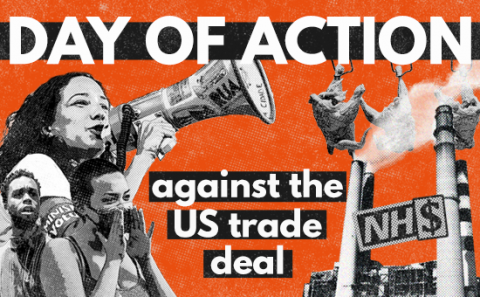 Day of action against the US trade deal

Take action against the US trade deal to protect services, standards, rights and democracy!

Supported by Global Justice Now, Keep Our NHS Public, War on Want, Traidcraft, We Own It, Open Rights Group, SumOfUs, Compassion in World Farming, Another Europe is Possible and the Stop Trump Coalition.

Join the day of action

The US trade deal is being used to kickstart a process that could reshape our society into a corporate marketplace. We’re taking a stand together against this high risk trade deal on Saturday 24 October 2020. Let us know if you can join the day of action

Plan for the day

We’re campaigning in pandemic times and things are changing fast, so this day of action will be a mix of things you can do from home, virtual online events and ideas for socially distant action outside on the streets when possible. We’ll keep the plans under review as we get closer to the time. At the moment, this is the plan – there’s a bit of a Halloween theme!