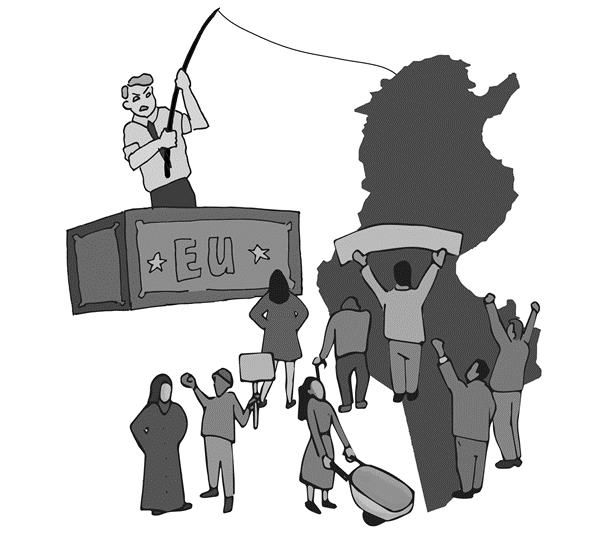 Tunisia has undergone radical changes in the past decade, and faces more in the years to come, if the EU has its way. As the first country to topple its dictator in early 2011, it set off a chain of revolutions across North Africa and West Asia that led to a political reconfiguration, the impacts of which are still playing out. While Tunisia is often seen as the ‘success’ story of the ‘Arab Spring’, the transition has actually been a lot more complex than that.

The existing economic trends, and the power of the existing political and economic elites, have in fact been strengthened, and the Tunisian people have yet to reap substantial benefits from their revolution. While ostensibly Tunisia is now a democracy, a series of ‘technocratic’ governments have struggled to bring change and to balance the interests of the traditional elite and the less-privileged general population.

The role of the EU (and other international actors) in this transition has been controversial, with some arguing that the ongoing Western-sponsored transformation in fact aims to subvert the aspirations of the Tunisian people’s calls for dignity, bread, national sovereignty and social justice. Western actors, including crucially the EU, have advocated for more of the same economic policies that many believe created the problems in Tunisia in the first place.

Tunisia has a long history and set of ties with the EU, in particular with France – it became a French ‘protectorate’ in 1881. While formal independence was granted in 1956, the legacy of colonialism has been hard to erase. The imperial economic patterns, whereby colonial economies were structured to meet the needs of the ruling power, endure, as does the economic dependence on the former colonial ruler.

It is in the context of these systemic legacies and deep power imbalances, as well as the political tumult brought about by the ‘Arab Spring’, that the EU has proposed a new set of trade deals with Tunisia and its neighbours. The EU proposes that Tunisia enter into a Deep and Comprehensive Free Trade Agreement (DCFTA) with it, and negotiations have been ongoing for 5 years. The economic and social impact of such an agreement could be very significant, and this report examines the concerns that have been voiced about the DCFTA, but largely excluded from official negotiations and the national discussion in Tunisia on the mooted trade deal.

In particular the report highlights the following:

1. The process of negotiating the DCFTA has been problematic, notably in three ways.

Exacerbating power imbalances between Tunisia and the EU

The power imbalances between Tunisia and the EU are stark. The EU’s average per capita income and GDP are multiples higher than Tunisia’s, and the region is also the country’s largest trading partner, and a key source of loans. Tunisia’s multifaceted dependence on Europe and the obvious asymmetry between the two clearly prevents any balanced negotiation being possible.

The DCFTA has been presented by Tunisian governments both as an opportunity to achieve Europe’s privileged- partner status and progress towards integration into the prosperous EU market, and as a necessary evil required to put the local economy back on track by boosting Foreign Direct Investment (FDI). The reality, however, is that recent Tunisian governments, entangled by external debt servicing, could see no alternative but to continue liberalising the local market in order to keep benefiting from European funding and technical assistance. Moreover, the EU exercised pressure and blackmail by placing Tunisia on its black list of tax havens in December 2017 and on its money laundering and terrorist financing black list in February 2018. Alarmingly, the Tunisian administration has not undertaken any of its own official studies to inform its approach to the DCFTA.

The approach to civil society consultation has been highly problematic and lacking in transparency. The organisations consulted officially have been carefully selected, and concerns have been raised about the nature of their mandate and funding. The unsurprising result is that these handpicked ‘civil society representatives’ make limited and weak demands of the EU, while the main social groups who are negatively affected by ‘free trade’ agreements (such as small farmers, female agricultural workers, informal labourers, small and medium producers, consumers and beneficiaries of public services) are excluded from the discussion.

2. The likely impacts of the DCFTA could be devastating for the majority of the Tunisian people

Low wages are Tunisia’s main comparative advantage, and the DCFTA targets this. For example, the minimum agricultural wage in Tunisia is 15.5 dinars per day (about 5 euro), while in France it is about 10 euro per hour - thus a day’s agricultural work in Tunisia is equivalent to half an hour’s work in France. By liberalising the agricultural and service sectors and facilitating the introduction of EU capital, the agreement will allow the local labour force to be taken advantage of at the lowest price. The DCFTA will encourage EU investors to relocate labour-intensive activities to Tunisia so as to maximise their profits by capturing the value created by super-exploited low wage Tunisian workers.

The official discourse used to promote the DCFTA focuses on "Small and Medium Enterprises" (SMEs). Presented as drivers of economic growth, innovation and job creation, the agreement specifically targets the needs of SMEs. However, while 83% of EU enterprises are SMEs, in Tunisia only 3% of enterprises fall into this category.

The Very Small Enterprises (VSEs) which are the key economic actors in Tunisia, making up about 95% of enterprises, are not expected to evolve under the DCFTA but to disintegrate and disappear, to the benefit of larger companies. These businesses currently operate in a protected market, and provide income for several hundred thousand households. But they remain precarious, with very limited means. They will be unable to survive the tsunami of EU products and capital flooding in, especially without specific policies designed to protect and strengthen them.

Small and Medium Enterprises (SMEs): Producing and exporting to Europe

For the very small number of larger Tunisian companies, the DCFTA gambles that, once integrated into the EU ‘free trade’ system, they will be able to create jobs. The overlapping interests of the Tunisian rentier oligarchy, political power holders and Western ‘free trade’ actors align in pushing for a trade agreement that directs the Tunisian economy to exclusively support export-oriented companies. The existing subordination of the economic system to these narrow interests will be reinforced by the DCFTA, with public policies increasingly serving sectors which have very low added-value for the local economy, but which create rents for exporting companies and huge profits for European firms.

The Upgrading Programme (PMN) is often presented as the main benefit of the DCFTA for Tunisia, which necessitates all the other sacrifices. It is defined as a continuous process that aims to prepare and adapt the company and its environment to the requirements of international competition. However, the record of the previous PMN (which commenced in 1995) does not bear this out. It excluded all micro-enterprises (VSEs) from the upgrading process despite their centrality to the Tunisian economy, while directing investment towards export and services, in turn shifting the economic emphasis away from productive sectors. The PMN also failed in its claimed objectives - it has not supported Tunisia to move beyond the sub-contracting stage in global value chains, but has instead perpetuated unequal exchange (to the benefit of the EU) and maintained the dominated status of Tunisia within the world capitalist system. The new PMN will surely follow the same logic and approach.

It is time for Tunisia to reflect deeply, and make an objective assessment of sixty four years of independence and economic exchanges with Europe. It is no longer sustainable to turn a blind eye to the reality of the Tunisian economy, the nature of its relations with the EU and the interconnections between the structure of local political power and the systematic move towards ‘free trade’. As a country that has recently emerged from dictatorship, and which now seeks a new path to development, the question of which economic approach to adopt is of fundamental importance. A new economic plan and development model is required, to put the country on the path to sustainable and equitable development. Such a strategy must be democratically developed, debated and chosen by the Tunisian people.

The EU’s approach is dictated by its own commercial interests – the DCFTA is designed to insert the most profitable companies on Tunisian soil into the European free market and to condition the Tunisian market to supply the EU. These two objectives are contrary to most Tunisians’ political, economic, social and environmental interests. It would be naive to expect that the deepening of inequalities and 6 | Deep and Comprehensive Dependency: How a trade agreement with the EU could devastate the Tunisian economy entrenching of economic subordination that will result from the DCFTA will have no political effects. It is therefore wise to remember that the core slogans during the uprising in Tunisia called for social justice, sovereignty and the end of the ruling oligarchy’s privileges.

In this context it is of paramount importance for activists and Civil Society Organisations (CSOs) on both sides of the Mediterranean to:

Download: Deep and Comprehensive Dependency: How a trade agreement with the EU could devastate the Tunisian economy(pdf, 5.49 MB) Average time to read: 30 minutes