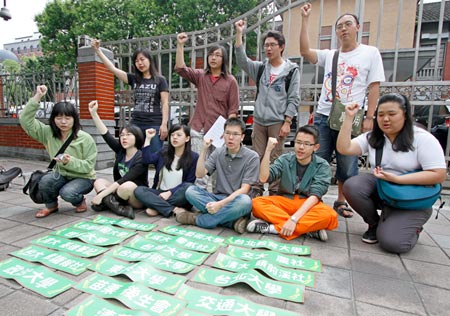 A student group protests against the import of US beef in front of the Legislative Yuan in Taipei on April 20 2012. (File photo/Chang Kai-yi)

Taiwan said three years ago other governments were lining up to discuss free trade agreements after the world’s 19th largest economy had just signed an FTA lite with the even bigger China. Taiwan has yet to reach another deal.

After the China agreement emerged, Singapore and export behemoth Taiwan quickly started talks on their own free trade agreement. It wasn’t expected to take long because Singapore lacks agriculture, a common sticking point in FTAs talks. Negotiations are still “moving forward,” Taiwan’s foreign ministry spokeswoman said on Monday, but she declined to give a timeline or other specifics.

Last year New Zealand announced it was ready to negotiate a deal with Taiwan but the two sides have been quiet since then.

China, Taiwan’s top trading partner, was also supposed to negotiate thousands of new import tariff cuts following about 800 reductions that came with the 2010 framework agreement. The plan is on hold indefinitely.

The island known for moving big batches of electronics to world markets is struggling to keep a toehold in Asia politically and economically against rivals that make the same stuff and have more trade deals. FTAs are a core strategy for Taiwan, Taiwan President Ma Ying-jeou has told a jaded home audience.

So is China. Beijing was once an enemy that signed nothing with Taiwan and told Taiwan’s top trading partners as well to shun formal accords with the place. Being the world’s second largest economy, Beijing could get away with that.

Then Taiwan and China reached the 2010 framework deal as overall relations warmed, and the government in Taipei said that breakthrough came with a quiet nod from Beijing to go on and negotiate FTAs with its other major trading partners. Those partners, mostly in Asia, were eager to team up with Taiwan’s economy now worth $468 billion, the government added.

Trade liberalization with those partners would cut costs for Taiwanese manufacturers as they have for its chief export-reliant rivals such as South Korea and ASEAN. Savings from import tariffs would presumably allow wages to rise and the island’s major employers to hire more people, easing two stubborn domestic issues.

Clues are few to what’s held up the Taiwan-Singapore deal, but its fate shapes any future FTAs. Other countries are watching for whether China holds it up or publicly protests whenever the two eventually sign. One of those countries has already sidelined its hopes for a deal with Taiwan.

Singapore gets particularly scrutinized because the country is known for caution and its deal with Taiwan has been pipelined for longer than expected.

Analysts favor the view that Taiwan and Singapore are stuck on specific terms of the deal – but can’t imagine what those terms would be. South Korea and the United States took about five years to put their FTA into motion, they note.

“Three years is not really that long,” says Chen I-hsin, professor of international affairs at Tamkang University in Taiwan. “There are some substantive issues still being discussed.”

Another theory: Singapore and Taiwan are trying for a comprehensive FTA involving the service sector and intellectual property rights rather than just a short list of tariff cuts. The deeper the deal, the longer the talks, says Wai Ho Leong, regional economist with Barclays Capital in Singapore.

“If you want top quality, it takes a while,” Leong says, and the Singapore deal is “important to Taiwan because it’s a first since the China framework agreement, so Taiwan wants it to be a model.”

Another theory: It’s not happening because China hasn’t given Singapore the all-clear.