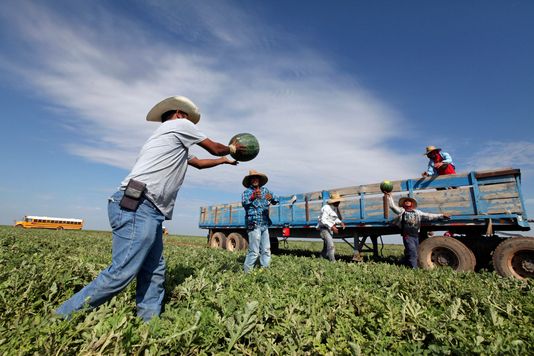 Don’t fall for the hype of free trade agreements

Jim Goodman is a third-generation dairy farmer from Wonewoc, Wisconsin.

Approval of the North American Free Trade Agreement (NAFTA 2.0 also known USMCA) will do little to reverse the problems of the NAFTA trade agreement of 1994. Nothing in the proposed replacement agreement will prevent job outsourcing, nor is there any part of the agreement that would reverse our current agricultural trade deficit. So what’s the deal with the “Motorcade for Trade” tour?

The 2018 Census of Agriculture documents the occurrence of a clear shift in farm size. Small and medium sized farms are exiting production while the number and overall size of larger farms continues to increase. We are told growth is inevitable in any business if they wish to succeed, because growth goes hand in hand with efficiency and profit.

Farmers are told they must become more efficient and adopt economies of scale and that rationale is often accepted since farm prices are seemingly always on the decline and less income per unit of production means more units of production are required if one wants to survive. This same logic is applied to most jobs: factory workers must produce more, teachers must teach larger classes, etc.—all for the same low wage.

Farmers are also told salvation from the low prices resulting from overproduction will come from expanding export markets. Sounds logical, sell the excess overseas, but farmers everywhere are being sold the same story—increase exports. But everyone can’t increase production and expect it to find a willing buyer. Time to accept the fact that too much production is just too much.

Free trade agreements allow movement of goods across international borders without tariffs and theoretically, everyone benefits. In reality most farmers do not directly export goods, their produce is sold increasingly to multi-national corporations who buy at the lowest price possible, add a processing component, drastically increase the price of the finished product and sell, world-wide, with the benefit of trade agreements that insure they pay no import duties.

With the current push to enact the Administrations USMCA (NAFTA 2.0) industry front groups are again passing themselves off as grassroots organizations pushing the best interests of farmers, working people and the environment. Don’t be fooled.

Trade Works for America, a front group started by two Republican operatives, aims to spend more than $10 million to encourage members of Congress to support the USMAC.

Farmers For Free Trade, an industry front group—arguably has members who are actually farmers—but the vast majority of funding comes from members of the Big Ag lobby, like Croplife America, WalMart, American Farm Bureau Federation and Tyson Foods—hardly a friend of the farmer.

While farmers do sell to the vertically integrated (from egg, to chicken nugget) giant that is Tyson Foods, their interest is in corporate profit, not profitability for farmers. As Arkansas farmer Karen Crutchfield told Farm Aid in 2015, “I’d like to see the farmers treated equally, where they can make a living instead of the big man getting everything and the growers getting just enough to get by.”

As noted on the Tyson website, "We now have production facilities in China and India, with poultry production for their own consumers and rising export industry. Tyson produces 1 of every 5 pounds of meat consumed in the U.S. 122,000 employees annually process and sell $15 billion worth of beef, $11 billion of chicken, and $5 billion of pork. They also formulate, package, and sell $8 billion in prepared foods under a brand roster that includes Hillshire Farm, Jimmy Dean, Ball Park Franks, Original Philly Cheesesteak, and Aidells Sausage. Half of the products are distributed by retail grocers; most of the rest go to McDonald’s, Burger King, Wendy’s, KFC, and other food-service outlets."Tyson is also invested in Memphis Meats Inc., a company developing lab-grown beef, poultry and fish. How do you square that with the “Farmers” For Free Trade?

Clearly, one of the long term intentions is to break Canada’s supply management system for dairy, poultry and eggs, and the US hopes NAFTA 2.0 will cause the first cracks in that system. Canadian farmers control their production insuring stable, fair farm prices, a consistent supply of locally produced food at a fair market price, all with no government subsidization.

According to a University of Arizona study, if the Canadian supply management system is eventually removed, "herd sizes could expand and increased economies of scale could lead to larger, more efficient herds, with lower costs, which could eventually lead to Canada becoming a net dairy exporter as Canadian dairy becomes more competitive in international markets."

Help for struggling US dairy farmers? Hardly, but as intended, it will be a boon to multi-national corporations.

NAFTA 2.0 is not about feeding people or helping and doing right by American farmers or Canadian farmers or Mexican farmers—it is about furthering corporate profit. With continued over production for international markets, the need for more tax payer subsidies to prop up sagging farm prices will continue.

As the Farmers For Free Trade launch their “Motorcade For Trade” RV tour with stops from New York to Montana to hype NAFTA 2.0, the people and the politicians the tour is targeting need to remember that farmers need fair prices, fair trade agreements and production control—not another business-as-usual traded deal that fattens corporate profit at the expense of farmers, families, the environment and our economic security.

Accept no imitations, industry front groups are not farmers.