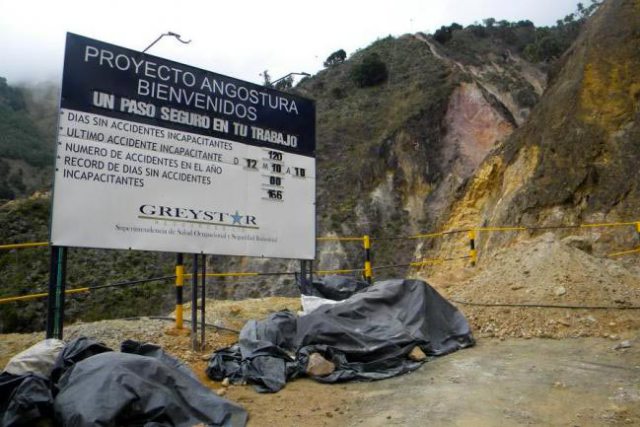 Eco Oro Minerals (TSX:EOM) announces that it filed a Request for Arbitration with the World Bank’s International Centre for Settlement of Investment Disputes against Colombia (the “Request for Arbitration”) on December 8, 2016. The claim relates to Eco Oro’s dispute with Colombia in relation to arbitrary, inconsistent and disproportionate State measures that have destroyed the value of its investments in the Colombian mining sector and deprived Eco Oro of its rights under its principal mining title, Concession Contract 3452 (“Concession 3452“), comprising the Angostura gold and silver deposit, in violation of Colombia’s obligations under the Canada-Colombia Free Trade Agreement (the “Free Trade Agreement”).

Eco Oro was one of the first foreign mining companies to invest in the country’s gold mining sector. Since the mid-1990s, the Company has invested over US$250 million to develop the Angostura mining project (the “Project”) by completing more than 360,000 meters of drilling and 3,000 meters of underground development. As a result of these investments, Eco Oro declared resources for the Angostura deposit where none existed before, and doubled those resources between 1999 and 2015. The deposit is now one of the largest in Colombia. Eco Oro made these investments in reliance on Colombia’s commitments in its mining titles, including Concession 3452 that was stabilized pursuant to Colombia’s 2001 Mining Code. The Colombian Government made repeated assurances of support for the Project, even declaring it to be a “project of national interest” in 2011 and again in 2013. Eco Oro itself has been lauded for its social programs and its environmental practices, receiving awards both internationally and from the Colombian authorities.

Notwithstanding these commitments and assurances, the Colombian Government, through the Colombian National Mining Agency (Agencia Nacional de Minería or “ANM”) issued a decision in August 2016 depriving Eco Oro of vital rights under Concession 3452 on the basis of a Constitutional Court decision issued in February 2016, as Eco Oro reported on August 11, 2016. That decision came five months after the Company’s March 7, 2016 announcement that it had formally notified Colombia of its intent to submit to arbitration a dispute arising under the Free Trade Agreement.

Eco Oro’s rights are faced with the threat of further encroachments given the risk that the Constitutional Court and National Mining Agency will issue future decisions further reducing the area accessible to Eco Oro. As a consequence of these uncertainties, the Project cannot currently be licensed.

The result of Colombia’s measures is that resources remaining in Concession 3452 that could potentially be accessed are insufficient to justify the significant investments required to develop an underground mine. The Project has been rendered unviable.

As Eco Oro explains in its Request for Arbitration, the Company is a protected investor under the Free Trade Agreement and is therefore entitled to the protections set out in the investment chapter of that agreement. It is the Company’s position that Colombia has breached the protections established in the Free Trade Agreement, including by: (i) failing to afford Eco Oro fair and equitable treatment through arbitrary, inconsistent and disproportionate measures and the frustration of its legitimate expectations; and (ii) unlawfully expropriating Eco Oro’s investment by destroying its value without the payment of prompt, adequate and effective compensation. Colombia’s measures have not only deprived Eco Oro of its investment but also the returns that would have resulted from the Company’s investment of hundreds of millions of dollars over the past two decades in reliance upon Colombia’s commitments. Eco Oro is therefore asserting its entitlement to recover the losses to its investment resulting from Colombia’s breaches. The amount of such losses will be determined at a later stage in the Arbitration.

Eco Oro Minerals Corp. is a publicly‐traded precious metals exploration and development company with a portfolio of projects in Colombia. Eco Oro has been focused on its wholly‐owned, multi‐million ounce Angostura gold‐silver deposit, located in northeastern Colombia.