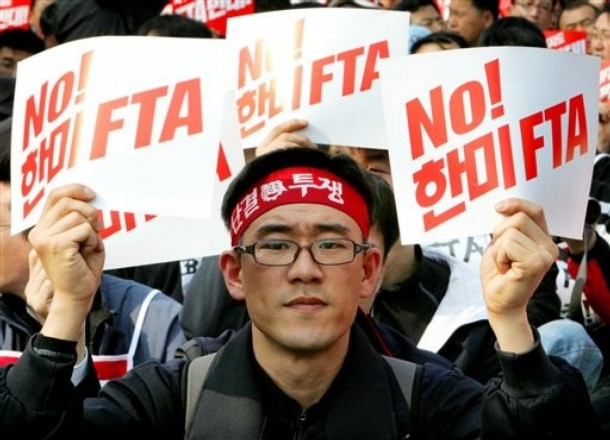 It has finally been revealed that the biggest reason that the implementation of the low-carbon vehicle incentive system has been delayed to 2015 was the South Korea-United States Free Trade Agreement (KORUS FTA). Having claimed that only the automobile industry, certain government agencies that represented their interests, and lawmakers in the National Assembly were to blame was a baseless claim. Concerns that the KORUS FTA would endanger not only legal but also legislative sovereignty and jeopardize Korea’s ability to create and enforce public policies are being realized.

In the KORUS FTA, discrimination based on the amount of vehicle emissions was included in a list of technological barriers to trade prohibited through 2015. This clause was pushed through by the US government during the renegotiations at the request of US companies, which generally manufacture and sell large vehicles that emit large amounts of carbon.

It was inevitable that the low-carbon vehicle incentive system, which provides subsidies or penalties according to the amount of exhaust gases released, would fall afoul of this provision. It was not until Nov. 2012 that the Ministry of the Environment, the department with jurisdiction over this matter, informed the National Assembly of this fact. At the time, the National Assembly was reviewing a revision to legislation about preserving air quality, which is the basis for the incentive system. Following this, the National Assembly’s Environment and Labor Committee delayed the timeframe for implementation, which had been scheduled for the second half of 2013, to 2015.

Fears that Korea’s legal sovereignty would be infringed on by the KORUS FTA had already been realized in 2012 when US private equity firm Lone Star lodged an investor-state dispute (ISD) against the Korean government.

The low-carbon incentive system, which is part of the current administration’s project to reduce national greenhouse gas emissions, has been promoted since 2008. In order to achieve the goal of a 30% reduction in greenhouse gases in Korea by 2020, the government had decided to decrease greenhouse gases in the transportation sector by 34%, and this system was the key means of achieving this.

In addition to the fact that the transportation sector accounts for 17% of greenhouse gas emissions, Koreans tend to prefer medium and large vehicles, meaning there is a lot of room for improvement. Furthermore, at a time when Europe and other parts of the developed world are strengthening emission regulations on vehicles, it was hoped that this system would serve as a carrot-and-stick method to lead to technological development in the Korean automobile industry. Thanks to the KORUS FTA, this system is stuck in limbo.

Even if the negotiations were rushed through, the response should at least have been handled better, but the government was blind to the situation. They didn’t recognize this problem until receiving documentation from the Korea Automobile Importers and Distributors Association (KAIDA). As late as Aug. 2012, when the bill was submitted to the National Assembly, the government was confident that it would be implemented, claiming that they can convince not only dissenting voices in various government departments but even the Korean automobile companies worried about a reduction in sales of large automobiles. The government was completely oblivious to the trap lurking in the KORUS FTA.

If national sovereignty is being threatened in this way, there is only one thing for the government to do: renegotiate the agreement. In Nov. 2011, President Lee Myung-bak said that, provided that the National Assembly would ratify the bill, he would ask the US government to renegotiate the KORUS FTA within three months of it taking effect. The government cannot hesitate now.