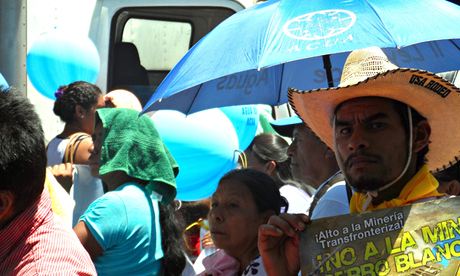 There is a widespread movement, including politicians and the church to keep El Salvador’s metals in the ground. Photograph: Claire Provost for The Guardian

A multinational mining company has been accused of launching "a direct assault on democratic governance" by suing El Salvador for more than US$300m (£179m) in compensation, after the tiny Central American country refused to allow it to dig for gold amid growing opposition to the exploitation of its mineral wealth.

Pacific Rim, now owned by OceanaGold, a Canadian-Australian firm, applied in 2004 for a permit to start operations at its El Dorado mine in the northern province of Cabañas.

The company seeks $301m from El Salvador in a protracted investment dispute that began in 2009. Pacific Rim claims El Salvador violated its own investment law by not issuing it a permit to dig for gold at the El Dorado mine.

But El Salvador argues that the company not only lacked environmental permissions for the project, but that it did not own, or have rights to, much of the land covered by its concession request, and did not submit a final feasibility study for the mining operation.

Although mining has never played a large part in the Salvadoran economy, rising gold prices and the relative stability that followed the 1992 peace accords which ended the country’s 12-year civil war have lured dozens of companies to explore its land. Although they were initially welcomed by a series of pro-business governments, the tide has turned against mining as a route to development.

Today, there is a widespread movement to keep El Salvador’s gold and other metals in the ground, with politicians from all parties, the state’s human rights office, civil society organisations and the Catholic church speaking out against mining. Since 2008, there has been a de facto moratorium on metal mining, with successive presidents committing not to issue new permits while in office.

Anti-mining campaigners argue that the Pacific Rim case, which is being heard at the International Centre for the Settlement of Investment Disputes (ICSID) at the World Bank, has served only to strengthen opposition to mining in El Salvador.

Signatories to the letter – addressed to the World Bank president, Jim Kim, on Thursday – include Oxfam, the Jubilee Debt Campaign, the International Trade Union Confederation and dozens of Salvadoran organisations. They accuse Pacific Rim of using ICSID to challenge El Salvador’s moratorium on mining.

"When it comes to such issues, local democratic institutions should prevail, not foreign corporations seeking to exploit natural resources," it says. "These matters should not be decided by the World Bank’s investor state arbitration tribunal or any other foreign tribunal."

The letter claims the investor-state dispute process has allowed corporations to "undermine the public interest laws and regulatory structures in countries of the global south", and calls on the World Bank to urgently review the role of ICSID in meeting the Bank’s stated mission of ending poverty. Such a review should happen in public, it says, and should allow communities affected by mining to have their concerns recognised.

Before trying the case under El Salvador’s investment law, Pacific Rim had tried unsuccessfully to do so under the Dominican Republic-Central America Free Trade Agreement (Cafta-DR). This was dismissed by an ICSID tribunal, and brought accusations of "jurisdiction shopping" against the company.

El Salvador amended its investment law last year, so that companies with complaints have to go through local courts instead of international arbitration courts, though this does not apply retrospectively and has no impact on the current case.

The hopes of El Salvador, which has spent more than $6m on the case, rest on a hearing scheduled for 15 September, the country’s independence day.

This timing is symbolic, according to Luis Parada, El Salvador’s lawyer on the ICSID case. "This case stands for the principle that a country does not have a legal obligation to change its laws to please a foreign investor; rather, it is the foreign investor who has the obligation to comply with the laws of the host state," he said.

Pacific Rim is expected to submit its written arguments to the ICSID tribunal on 11 April; El Salvador will respond in July. A final decision is not expected before 2015.

A spokesman for the World Bank Group said cases at ICSID are decided by expert arbitrators and are independent from the work of other World Bank institutions. "ICSID provides an important service to states and investors worldwide by offering impartial, cost-effective and efficient facilities for the settlement of international investment disputes, which under the ICSID convention are entirely voluntary and require consent of both the investor and state concerned," he said.

Announcing its acquisition of Pacific Rim in late 2013, the managing director and chief executive of OceanaGold, Mick Wilkes, said: "Our company has a long and successful track record of operating gold mines in partnership with local communities in a safe and sustainable manner and we look forward to working with our key stakeholders in El Salvador to unlock the significant opportunity that exists at El Dorado for the people of El Salvador."

The president and chief executive of Pacific Rim, Tom Shrake, said: "OceanaGold shares our high regard for the hard-working people of El Salvador and is committed to working hand in hand with the government and citizens of El Salvador to help build an economy without sacrificing the ecosystems or the rich culture that defines El Salvador."

In addition to its dispute with the government, Pacific Rim has been challenged by community activists who say the El Dorado project could have catastrophic consequences for local water supplies and the Rio Lempa, a river on which much of the Salvadoran population depends.

"It’s essential to defend every drop of water," said Hector Barrios, a 40-year-old anti-mining activist in Cabañas. "The struggle here is in defence of life, in defence of water. That’s why we are in conflict with mining companies."

The Pacific Rim dispute is seen by many as a landmark case, because of the costs that could be imposed on the country and the precedent it could set for other companies looking to mount cases against the government.

"There are so many permits on standby right now, so there is fear that these companies will follow the lead of Pacific Rim," said Yanira Cortez, deputy state attorney for human rights. "These tribunals, this type of arbitration … puts El Salvador in a dangerous situation because it means that investment is more important than the population and the environment."

Activists say the case also has wider implications. "[This case] demonstrates what happens when a poor country takes a decision and that is challenged by rules that privilege investor rights," said Manuel Pérez-Rocha at the Institute for Policy Studies (IPS) in Washington.

Known by some as the land of volcanoes, El Salvador is highly vulnerable to environmental threats and natural disasters. It is also one of the most densely populated countries in the world, with 304 people per sq km in 2011. Estimates suggest that El Salvador is the second most deforested country in the Americas after Haiti, and that 90% of surface water is contaminated, triggering fears of a growing water crisis.

The case comes as a raft of free trade agreements are being considered worldwide, with the role of investor-state arbitration considered a key debate around the proposed Trans-Pacific Partnership and Transatlantic Trade and Investment Partnership.

• This article was amended on 11 April to include comment from the World Bank.