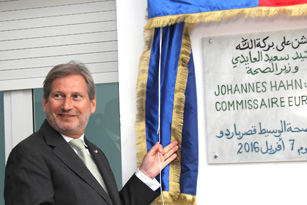 "The money is not unconditional," EU commissioner Johannes Hahn said

The European Commission proposed on Thursday to increase aid to Tunisia and complete a deeper trade pact within three years, as the EU seeks to support the new government in Tunis and support it on its difficult path to democracy.

The bloc would nearly double its current annual aid to 300 million euros until 2020, as well as lend 500 million euros to help stabilize the Tunisian economy, to be disbursed this year and next. European development bank loans and other financing also could bring 800 million euros for infrastructure projects.

"The money is not unconditional," the EU’s enlargement commissioner Johannes Hahn, told a joint news conference with the EU’s foreign policy chief Federica Mogherini, who proposed summits every two years between EU and Tunisian leaders.

"We have decided to double our financial effort, not only because Tunisia needs the money but to increase our leverage," Hahn said.

Tunisia already has limited access to the world’s biggest trading bloc, but a deeper trade accord would integrate its economy into the EU’s internal market, if agreed by EU governments and the European Parliament.

Talks started in April this year and the Commission pledged in a new policy document on Thursday "to bring concrete deliverables within three years."

Tunisia has gone through five prime ministers in as many years since its revolution, with its sixth, French-educated technocrat Youssef Chahed, taking office in August.

The European Union is eager for Tunisia, seen as the only success story of the Arab Spring revolts which started there, to avoid the repression and war that has consumed many of its neighbors that attempted uprisings against authoritarian rule.

Facing a migration crisis and failing states on its borders, the European Union has a vested interest in Tunisia’s stability. The North African state is struggling with lower tourism revenues after two Islamist militant attacks on foreign tourists last year hit what is one of its key industries.