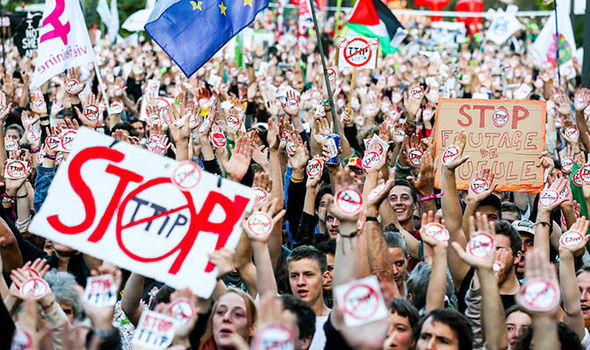 EU trade chief says US talks will not include agriculture

WASHINGTON (Reuters) - The European Union and United States have not yet agreed on the scope of trade negotiations, but the bloc will not include agriculture in the talks, its trade commissioner said on Wednesday.

U.S. President Donald Trump has sought better terms of trade with the EU, as well as China, Japan, Canada and Mexico. EU negotiators said they would discuss industrial goods including autos, but not agricultural products - a blow to American farmers, who would like to boost access to the lucrative European market.

“We have made very clear agriculture will not be included,” Cecilia Malmström told a group of reporters on Wednesday, though she said the two sides had not yet agreed on that issue.

USTR notified lawmakers in October of its plans to pursue the trade talks with the European Union. The EU was in the final stages of preparing its negotiating mandates for the talks, Malmström said.

In separate remarks to reporters on Wednesday, Republican Senator Chuck Grassley from Iowa said agriculture would need to be a part of the agreement to have support from lawmakers. Iowa is a top corn producing state.

“I don’t know how anybody in Europe that wants a free trade agreement with us can expect it to get through the US Senate if you don’t want to negotiate agriculture,” Grassley said.

Grassley and Malmström were to meet later that day, he said.

Europe has received no assurance that U.S. auto tariffs would be put on hold during the discussions, but believed the European bloc would not be affected by such tariffs while the talks were ongoing, Malmström said.

The European Commission executive said it was preparing two mandates - one to cover removal of tariffs on industrial goods and another on areas of possible regulatory cooperation in areas such as pharmaceuticals, medical devices and cyber security.

The mandates would first need to be cleared by the commissioners before being presented to the EU’s 28 member countries for approval.

It was unclear how long this process would take and when formal talks could be held. Experts from both sides will conduct discussions about technical matters this week.