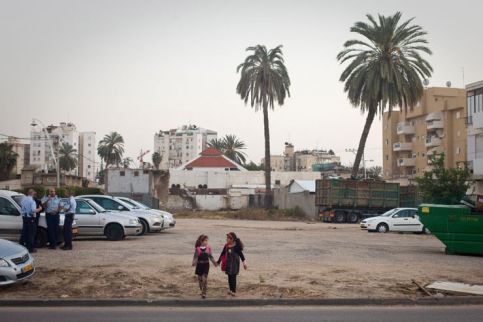 Palestinian children in the city of Lydd near Tel Aviv. (Oren Ziv/ActiveStills)

Answering questions from YouTube viewers over the past few weeks, Benjamin Netanyahu depicted Israel as an oasis of interracial harmony in a region of strife. "There’s only one country in the heart of the Middle East that has no tremors, no protests," the Israeli prime minister said. "That’s Israel. Because we’re the only one where we respect human rights. The only one that respects the rights of Arab citizens. Twenty percent of our population are Arabs. And they enjoy full civil rights in Israel. It’s the only place in this entire vast expanse where Arabs and Muslims enjoy complete freedom and complete equality before the law."

It was a statement of characteristic chutzpah. Despite his claim that Israel "respects the rights of Arab citizens," its national parliament — the Knesset — had just approved two pieces of legislation that discriminate against the country’s 1.4 million Palestinian citizens.

First, on 22 March, a bill was passed to withdraw state funding from any institution that commemorates the Nakba, the forced displacement of Palestinians in 1948 that accompanied the establishment of the State of Israel. Then, six days later, the Knesset approved a new law, which allows for Israeli citizenship to be removed when someone is convicted of terrorism or treason. Opponents of the law noted that it was directed at Palestinians and that it was virtually unthinkable that Jewish Israelis would have their citizenship revoked as a result.

Netanyahu’s comments were made ahead of a short European tour, confined to Germany and the Czech Republic. Predictably, they did not elicit any protest from the political leaders he met in Berlin and Prague. Angela Merkel, the German chancellor, went out of her way to exude warmth towards her guest. Insisting she is "never irritated" by Netanyahu (notwithstanding reports they had exchanged cross words in February over the expansion of Israeli settlements in the occupied West Bank, including East Jerusalem), Merkel described her contacts with him as "fun."

Merkel’s silence over the treatment of the Palestinian minority in Israel is mirrored by the stance of the entire 27-country European Union.

Since Catherine Ashton was appointed the EU’s foreign policy chief in 2009, she has not issued a single statement focusing exclusively on the plight of Palestinians within Israel. Her reticence stands in marked contrast to her hasty reaction to incidents that affect Israeli Jews. For example, she swiftly condemned the rockets fired by Hamas from Gaza into southern Israel on 7 April.

Ashton frequently meets Avigdor Lieberman, the Israeli foreign minister, whose party Yisrael Beiteinu (Israel Our Home) has been part of the country’s ruling coalition for the past two years. During that time, Lieberman and his colleagues have been the main sponsors of approximately twenty laws and bills designed to worsen the discrimination faced by Israel’s Palestinian minority.

In 1973, the United Nations recognized that the crime of apartheid did not only apply to South Africa but also to other situations where one racial group dominated over another. Israel has long enshrined its racism against Palestinians in quasi-constitutional legislation. The 1950 Law of Return enables Jews throughout the world to move to Israel and gain citizenship. Yet Palestinians forced to leave their homes during the 1948 Nakba and since then are denied that right.

When I asked Ashton’s spokeswoman Maja Kocijancic why EU representatives never utter the words "Israel" and "apartheid" in the same sentence, she replied that "Israel is a democratic country and a partner of the European Union. Human right issues and possible shortcomings in this respect are discussed in the regular dialogue we have with the Israeli authorities."

Israeli historian and political dissident Ilan Pappe disagrees with Kocijanic’s assessment. In an interview published earlier this month by New Internationalist magazine Pappe explained that "Israel is what we in political science call a herrenvolk democracy, democracy only for the masters" (Reframing the Israel-Palestine conflict). He added that "The fact that you allow people to participate in the formal side of democracy, namely to vote or to be elected, is meaningless if you don’t give them any share in the common good or in the common resources of the state, or if you discriminate against them despite the fact that you allow them to participate in the elections. On almost every level — from official legislation through governmental practices to social and cultural attitudes — Israel is only a democracy for one ethnic group."

The EU’s unwillingness to address the treatment of Palestinians within Israel was exposed in a February report published by Adalah, a human rights organization based in Haifa, and the Euro-Mediterranean Human Rights Network ("EU and the Palestinian Arab Minority in Israel"). It noted that the rights of the Palestinian minority in Israel are not even mentioned in the "association agreement" between the EU and Israel that came into effect in 2000 and sets out the main contractual basis of relations between the two sides.

That omission was partly compensated for by an "action plan" on Israel approved by top-level EU representatives in 2005. The plan listed minority rights as one of the topics which the European Commission (the EU’s executive) and Israel were prepared to hold discussions. While Brussels officials appear to be monitoring the situation facing the Palestinian minority in Israel, "the Commission’s language has neither consistently hardened nor softened over the years," the February report says.

"The EU is not willing to compromise its relationship with Israel," Nathalie Tocci, the report’s author, told me. "This means it’s unwilling to recognize Israel as not being a democracy. It is ready to criticize Israel’s democratic deficiencies — regarding human and minority rights — but would view these problems as analogous to those within some European countries too."

The socio-economic conditions in which Palestinians inside Israel live also put them at a disadvantage. Throughout Israel, more than 20 percent of households live below the poverty line. But the proportion rises to 50 percent for the Palestinian minority in general and to 80 percent for Bedouins.

When Lieberman visited Brussels in February, the EU issued a 45-paragraph statement on its relations with Israel. It called on the Israeli government to implement the recommendations of a panel chaired by Eliezer Goldberg, a retired Israeli judge, on Bedouin communities in the Negev. Issued in 2008, the Goldberg Commission report found that 62,000 Bedouins in 46 villages unrecognized by Israel were living in an "unbearable state." It urged Israel to confer a legal status on those villages.

Lending its support to a commission mainly dominated by Israeli establishment figures was an easy step for the EU to take. Unsurprisingly, it did not go further by denouncing the role of the Jewish National Fund (JNF) in destroying Bedouin villages such as al-Araqib, which has suffered more than twenty demolitions since July last year.

Even though the JNF’s bulldozers have been used in those demolitions and other acts of dispossession against Bedouins, the fund is regarded as a charity by some fifty countries worldwide. The JNF held a central position in the Zionist movement well before the State of Israel was established and used that position to advocate vigorously in favor of ethnic cleansing. Yosef Weitz, one of the JNF’s leading figures during the 1930s and ’40s, argued repeatedly that Palestinians should be forced out of Palestine.

The JNF has been given direct ownership of 13 percent of the land of Israel and a role in managing most of the remainder. It is particularly influential in Britain, where Prime Minister David Cameron is one of its patrons. On its website, the JNF presents itself as a humanitarian and environmental organization dedicated to planting trees in Israel.

"The JNF is involved in the illegal expropriation of Palestinian land and the concealing of Palestinian villages beneath parks and forests," said Michael Kalmanovitz from the Stop the JNF Campaign in Britain. "The fact that David Cameron is one of its patrons is a disgrace."

Hassan Jabareen, director of Adalah, said that both the EU and the US have tended to concentrate only on Palestinians living in the West Bank and Gaza and not on the Palestinian minority within Israel. By turning a blind eye to this community, the EU has failed to learn important lessons from the experience of its own member states. "You couldn’t have got peace between the UK and the Republic of Ireland without addressing the situation in Northern Ireland," Jabareen said. "Europe should understand that."

In his new book Boycott, Divestment, Sanctions: The Global Struggle for Palestinian Rights, Omar Barghouti argues that Westerners promoting conflict resolution in the Middle East have not grappled with the underlying injustices. "The main culprit is the insistence of Israel and successive US governments on exploiting the current massive power imbalance to impose a peace devoid of justice and human rights on the Palestinians, an unjust ’solution’ that fails to address our basic rights under international law and undermines our inalienable right to self-determination," he writes.

Barghouti is correct to pin much of the blame on Washington. Yet Europe’s contribution to this dismal state of affairs should not be overlooked, either. As the biggest destination for Israeli exports, the EU could have made the strengthening of its political and economic links with Israel conditional on improving the situation of all three groups that comprise the Palestinian people. These are the Palestinians in the occupied West Bank (including East Jerusalem) and Gaza; those holding Israeli citizenship; and refugees in the diaspora. The EU’s refusal to attach such conditions exposes its never-ending declarations of support for human rights as hollow.