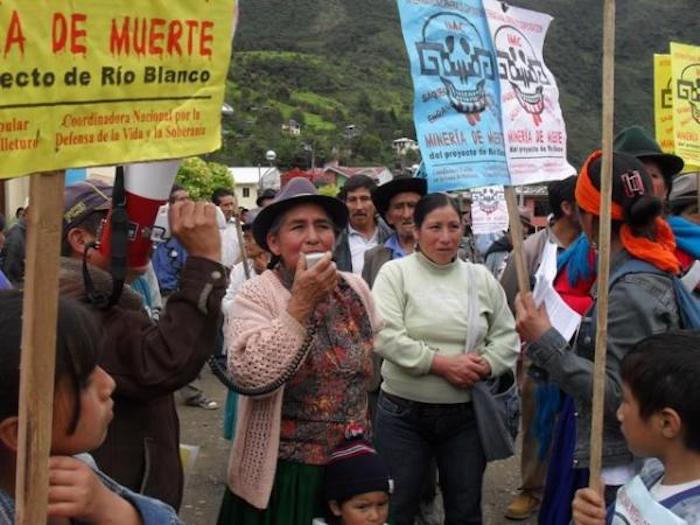 QUITO (Reuters) - Chinese mining consortium Ecuagoldmining has initiated a dispute with Ecuador’s government over a gold mining project that has been halted by objections from community activists, a move that could lead to a $480 million arbitration fight, an Ecuadorean official said in an interview on Tuesday.

Ecuagoldmining’s Rio Blanco mine in southern Ecuador had barely kicked off production in 2018 when the activists, mostly comprising local farmers, demanded they be consulted on whether the mine should be allowed, and won a court order halting operations.

Deputy Mining Minister Enrique Gallegos-Anda said it was the first such dispute since Ecuador began a broad push to expand its mining sector, which has drawn investor interest but also faces concerns about the power of local groups to halt projects.

“The international dispute was presented in January,” Gallegos-Anda told Reuters. “The ministry needs to officially receive the invitation for talks. We are going to have a dialogue and will seek a solution.”

The six-month process is the first step in a potential arbitration as laid out in an investment treaty between Ecuador and China, Gallegos-Anda said.

He added that Ecuador’s government hopes that a constitutional court ruling would allow the project to resume operations, avoiding an arbitration proceeding.

“The logical thing to do is wait for the magistrates of the court to conclude that the judges incorrectly interpreted the norms,” said Gallegos-Anda. “Shortly thereafter, the company could resume activities.”

If it does go to arbitration, the Ecuagoldmining will seek the full value of the gold that it expected to produce during the 11-year concession, he said, adding that he did not know which arbitration panel would hear the dispute.

Ecuagoldmining, a consortium made up of Chinese firms Junefield Mineral Resources Limited and Hunan Gold Group, declined to comment.

Community opposition to oil and mining projects has become a growing issue in Latin America, with local organizations in Peru and Colombia frequently demanding greater environmental protection and more jobs for those who live in the region.