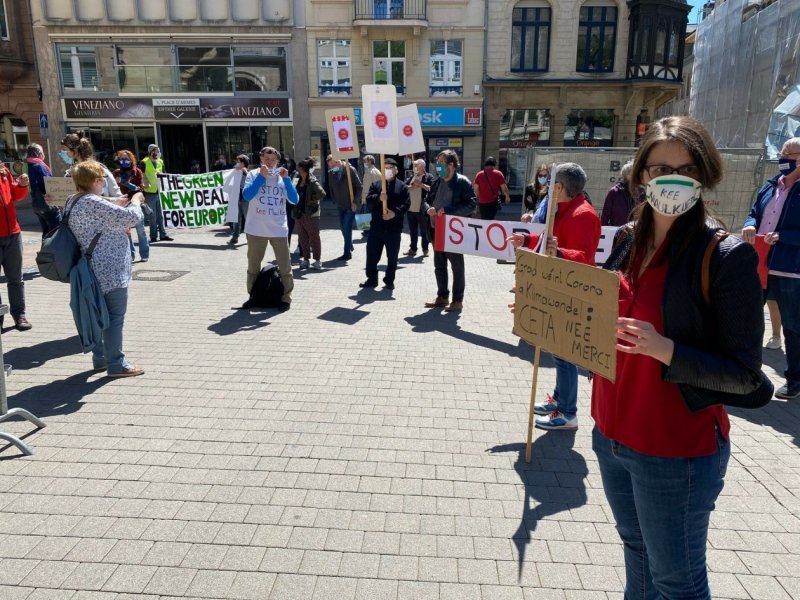 Expropriating democracy: on the right and legitimacy of not ratifying CETA

In May 2020, the unwinding saga in CETA’s ratification landed in a divided Dutch Senate. The date of the decisive vote in the Senate is dependent on the government’s response to questions raised by senators. Academics have suggested that the Netherlands should ratify CETA because not doing so ‘would be a very negative signal’ ‘in today’s crumbling international legal order.’ In a somewhat similar vein, the Parliament of Cyprus has been reprimanded for having rejected CETA. There are at least two sets of arguments that ought to be considered when discussing the legality and legitimacy of Member States ratification of CETA, which may have been understated in the above-mentioned analyses. The first is that national parliaments have a sound legal basis for not ratifying CETA. The second is that it is not only legal but fully legitimate to not ratify an agreement including an investor-state dispute settlement mechanism, one of the most controversial institutions in the contemporary international legal order. Underplaying the legality and legitimacy of this choice, we argue, is a disservice to forging a stronger and better Europe and international community.

As is well known, the fact that CETA is a mixed agreement is the result of the division of competences between the EU and the Member States in the EU Treaties. As a matter of EU law, the EU simply does not have the power to conclude the entirety of the agreement on its own and therefore needs the Member States, and consequently national parliaments, to ratify the agreement. The inclusion of an investor-state dispute settlement mechanism in trade agreements is what makes those agreements mixed (para. 291-92 of CJEU Opinion 2/15). In other words, Member States must ratify CETA for this aspect of the agreement otherwise the EU would be acting ultra vires. It is also worth recalling that there simply was no majority within the Council that would have allowed the EU to conclude the agreement. This was also made clear in the 2011 negotiating directives, which considers dispute settlement in the area of investment to be ‘mixed competence’. And this is valid, regardless of the fact that the CJEU has later considered that the substantive investment standards in CETA are compatible with EU Law. Mixing up the two issues – ratification and compatibility with EU Law – would be wrong analytically and substantively.

In short, the inclusion of an ISDS mechanism is a necessary and sufficient condition to not ratify the agreement for national parliaments. Serious concerns about the establishment of an investor-state dispute settlement mechanism in CETA have been raised by civil society organisations and were debated in the Dutch Senate. To argue that when other CETA-related issues are debated, this amounts to ‘circumvention’ of the EU exclusive competence, may then be seen as a straw man argument.

Beyond the purely legal argument (mixity demands ratification by the member states), the involvement of national parliaments is vital because investor rights are widely perceived as problematic both for the functioning of liberal democracy and the realisation of a green transition. It could be argued that CETA ICS is much improved vis-à-vis existing ISDS. There are two fallacies related to this reasoning. First and foremost, CETA ICS would establish a mechanism that so far does not exist between most EU Member States and Canada. There is, for example, no BIT between the Netherlands and Canada. In an attempt to downplay the threat of ISDS to public interest regulation, it has been reductively argued that the Netherlands was never sued under ISDS. Yet, in the existing Dutch BITs, the Netherlands is mainly an exporter of capital. Hence, it is unlikely to be sued. But this dynamic may change with an agreement with Canada. Under NAFTA, cases have been launched against the US and Mexico by a wide range of Canadian investors, from cattle farmers to pharmaceutical firms. Furthermore, CETA also opens the door to disputes with any American company that has substantial business interests in Canada. American investors can easily channel their investment through Canadian subsidiaries, as many already do.

The second fallacy with the argument that CETA ICS solves the problems of ISDS is that – in fact – it doesn’t. From a purely procedural perspective, many scholars have already highlighted how CETA does not go far enough in addressing some of the fundamental concerns. For example, it does not include a rule on the exhaustion of domestic legal remedies; nor does it provide for respondents’ counterclaims and investors’ obligations. This places the ICS system quite behind the recent developments in both treaty-making and arbitral case-law interpretation. CETA Chapter 8 also operates a renvoi to extrinsic arbitration rules, instead of introducing ICS tailor-made procedural rules. Above all, the investor-state adjudicative mechanism, whether pursuant to arbitration traditional ISDS or an ICS, can be seen as an obstacle to realise democratic ideals because of its asymmetric architecture, which grants ‘foreign’ investors exceptional rights to resort to international arbitration, with the rest of society being excluded from the system. There is no other system in the international legal landscape that affords private actors so much power. If democracy still aspires to meaningfully represent all and to grant everyone equal access to justice, then investor rights do not enhance democratic practice. The threat that such a system poses to public interest regulation has been amply studied.

Suggesting that the popular outcry against ISDS is negligible and that it would be illegitimate for European national parliaments to reject CETA appears not only analytically weak, it also risks reproducing a perilous EU technocratic model, which follows the same logic of hyper-populists and could be seen as part and parcel of the current EU legitimacy crisis. Eventually such a stance of EU institutions may backfire within a Union still hurting from Brexit.

CETA ICS: a stumbling block to a green transition

It is also worth reflecting that the worrying question is not the expected number of disputes, but it is how this body of law could be mobilised by unscrupulous lobbyists to stop or simply delay much needed regulation, leading to the phenomenon of regulatory chill. The actual, and even threatened, use of an investor-state dispute settlement mechanism can also increase the cost of the energy transition. EU countries might very well end up paying compensation for measures that are allowed or even mandatory under domestic or EU law. Or they might be bullied into paying more compensation than they otherwise would have. The threat by the energy company Uniper to initiate a dispute under the Energy Charter Treaty against the Dutch government for its decision to phase-out coal is a case in point. Even if the Dutch government maintains the policy, it may end up diverting public resources (which may otherwise be spent in the transition to a green and fairer economy) to a private company and its shareholders. In Germany, some have argued that the government is overcompensating coal power companies to avoid ISDS claims being brought against the “coal exit” plan. More generally, making industrial carbon producers responsible has been considered a key condition for a swift energy transition. The culture of compensating the fossil fuel industry for environmental policies, possibly fuelled by ISDS, should hence be resisted. Even when a state resists pressure, defends a policy in ISDS, and wins, it will likely have to divert scarce resources from useful social action to law-firms, who are amongst the main beneficiaries of the system (think of the Philip Morris case, in which the Australian government has spent about $24 million for legal external fees and arbitration costs). And this is coupled with an enforcement system of an incomparably extended reach via the 1958 New York Convention. Once successful, a Canadian or European investor can request enforcement of an award in 164 different countries – outside of the EU and Canada, that is – through a much enhanced procedure. Dutch (or any domestic) courts or even the CJEU could do little to nothing to avert that, even if they consider the award to be incompatible with EU or domestic law.

Most remarkably, should CETA be ratified, an appalling sunset clause makes sure that the agreement remains applicable to the benefit of investors for 20 years after CETA would be terminated. One would think that the EU would have learned something from the difficulties that it has faced in trying to modernise the Energy Charter Treaty, which also contains such a clause. The survival clause in the ECT makes it practically impossible for any state to credibly argue that it will withdraw from the treaty if reforms are not significant, thus preserving the status quo.

Non-ratification of CETA as paving the road to progressive internationalism

It is also important to think more broadly about the implications of investor-state arbitration beyond a pure nationalist perspective. For example, if Shell had an LNG project in Canada cancelled because the company had not obtained Free Prior and Informed Consent of the local Indigenous people, would the Dutch community support the company using CETA to sue Canada? What if the project were cancelled in order to help ensure that the planet does not warm more than 1.5 degrees? Absent agreement between the EU and Canada, the Netherlands simply will have no say in deciding whether these claims move forward.

On the one hand, the Dutch community, as part of a global community on a shared planet, has much to lose from the inclusion of ICS in CETA, even if a single case is never officially registered against the Dutch government. On the other hand, what does the Dutch community have to gain? The original promise of investment treaties was that they would promote investment flows between the state parties, but there is no consistent evidence that they achieve this in practice. And in any case, surely no one would suggest that Canadians have been reluctant to invest in the Netherlands due to concerns that they won’t be treated fairly in the country’s robust domestic court system.

Against this background, it remains puzzling how investor state arbitration is still being pushed, when on its face it is incompatible with the announced future political agenda of the EU, such as the new green deal. From this vantage point, non-ratification by the Netherlands is not only legally viable, but may be the only way to create momentum and move forward to negotiate more progressive trade deals, and forge a culture of progressive internationalism, where sustainability is not simply a decorative appendix. The political will is there, and Canada has negotiated more progressive deals. The re-negotiated NAFTA (the US-Mexico-Canada Agreement or UMSCA) does not have ISDS between the US and Canada. Presidential hopeful Joe Biden has stated his position against ISDS. Further afield, the Australian Labor Party has maintained opposition to ISDS since 2011 and the Ardern Government in New Zealand has negotiated a number of side agreements with countries to exclude the application of ISDS.

The question then is: why insist on keeping such a system in place, while it is progressively being dismantled in many of the new or reformed agreements? Why retain this neo-colonial vestige that is not supported by consistent evidence that it contributes to advancing development or the rule of law? Insisting that the only way forward is to reproduce old models of economic integration, which have arguably worsened inequality and contributed to environmental degradation, constrains the imaginary. The non-ratification of CETA by national parliaments could then be seen as opening up the political space for the negotiations of what can be called truly ‘comprehensive’ economic agreements, more genuinely aimed at nurturing human prosperity within planetary limits.